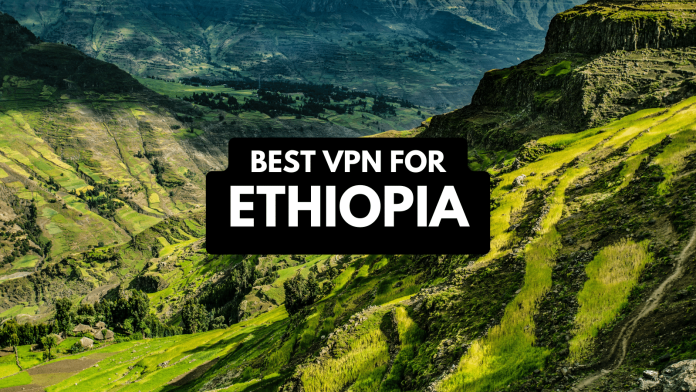 As a country, Ethiopia has some of the strictest online censorship in the world. Access to the Internet is heavily regulated in the country, such that the government of Ethiopia uses blackouts and censorship as a way to stop citizens from communicating with the outside world. So, it's no surprise that citizens of Ethiopia are turning to VPNs to fight online censorship. That said, we’ll walk you through the best Ethiopia VPN you can use to protect your online privacy.

Ethiopia’s online censorship became news when the country went into a lockdown in 2020 when telecommunication and Internet services were completely shut off. Two years later, Ethiopia is still struggling with the harsh grip of its government on online freedom and privacy. According to Freedom House, Ethiopia ranks as “not free” (23/100) in the Freedom on the Net index.

A VPN helps you stay safe online by spoofing your IP address. And it is the one tool you can rely on for instant online security thanks to its encryption. This best Ethiopia VPN list has all the information for you to tackle digital privacy challenges and reclaim your freedom on the Internet.

That said, a VPN does more than just secure your data online. It can give you access to content locked behind geo-restrictions. A small example is Hulu. You can watch Hulu in Ethiopia by connecting to a USA-based VPN server.

Let’s dive in to explore what makes for a great Ethiopian VPN.

How to Use a VPN in Ethiopia

You will need to download the VPN on your device, then connect to a VPN server to secure your communications. Do this to get started:

Get ExpressVPN for Ethiopia

Connecting to a server outside Ethiopia allows you to access blocked content. Similarly, a VPN server in Ethiopia will let you secure your data without having a foreign IP address.

Because Ethiopia has strict censorship, you need to pay attention to VPN protocols, as those dictate how easily you can use an Ethiopia VPN without getting detected. At the moment, the most secure protocols are OpenVPN, WireGuard, and Lightway. Also, look for globally-available VPN servers, a kill switch, and a zero-logs policy to keep your Web activities private.

Considering those criteria, here are the 5 best VPNs for Ethiopia:

ExpressVPN gets the crown for the best Ethiopia VPN because it has a large server network that spans 94 countries, a zero-logs policy, and the best customer service. It achieved the fastest speeds in our testing, which is what you should be looking for if you're into streaming or gaming.

As the leading VPN service on our list, it ticks all the right boxes. ExpressVPN supports IKEv2, OpenVPN, and L2TP/IPsec protocols for desktop and mobile devices. You can also use Lightway, ExpressVPN’s own VPN protocol designed for faster performance.

This VPN uses the industry-leading AES 256-bit standard for symmetric encryption. So, you can rest easy knowing that your data is safe from hackers and eavesdroppers.

Coming to streaming, ExpressVPN supports streaming with fast servers. You can unblock services like Netflix, Hulu, Amazon Prime Video, and Disney Plus, just to name a few.

It also offers a 30-day money-back guarantee on all its subscription plans. Expect to get quick assistance through live chat and email from customer support. And to provide transparency on its zero-logs policy, ExpressVPN also goes through regular audits by third parties.

You can download the VPN on Windows, Mac, Android, iOS, and more. It even supports routers, thus allowing you to use any device with VPN protection. Browser extensions are available for Edge, Chrome, and Firefox. Lastly, it allows you to use 5 devices simultaneously.

2. NordVPN - Most Feature-Rich VPN for Ethiopia

NordVPN earns the best Ethiopia VPN badge because of its feature stack that keeps improving every year. It is a zero-logs VPN service that has been operating since 2012 and now boasts a network of 5,200+ VPN servers in 59 countries worldwide.

On the security side, there is support for IKEv2 and OpenVPN protocols. You also get Wireguard support in the form of NordVPN’s branded NordLynx protocol. It fares faster than the other two protocols thanks to the underlying differences that have made Wireguard popular among VPN users. Additionally, it encrypts your data using the AES 256-bit standard for the best security.

NordVPN features a large network with fast VPN servers that support streaming services like Disney Plus and Hulu, as well as P2P downloading (it even offers specialized servers for that). NordVPN works flawlessly for streaming media in Ethiopia.

Supported platforms include Windows, Mac, Android, iOS, Linux, routers, and web browsers such as Firefox, Edge, and Chrome. You can use up to 6 devices simultaneously with one account.

Finally, NordVPN gives you a 30-day money-back policy that protects your purchase. You can contact its customer support anytime through live chat or email.

CyberGhost boasts an impressive lineup of 9,000+ VPN servers spread across 90+ countries. And as such, the possibility of unblocking geo-restricted content is very promising.

This VPN's user interface is visually appealing and makes navigation easy by grouping servers based on specific purposes, such as P2P, streaming, and gaming, for quick access.

You can also upgrade to get access to “No Spy” servers which are operated by CyberGhost and designed to give faster speeds. Since they are operated independently, your data cannot be seized by law enforcement entities.

Moreover, CyberGhost protects your purchase by offering a 45-day money-back policy on all plans except the 1-month plan. Customer support is available 24/7 via live chat and email.

Your subscription includes 7 simultaneous connections, which you can use on supported platforms such as Windows, Mac, Android, iOS, routers, and more. CyberGhost also works via a browser extension on Firefox, Edge, and Chrome.

Surfshark is our pick for one of the best Ethiopia VPN services because of its affordable pricing, zero-logs policy, obfuscated servers, and unlimited simultaneous connections.

That’s right - you can connect from an unlimited number of devices. Support for Windows, Mac, Android, iOS, routers and other platforms means you can use any number of devices to get VPN protection via the Surfshark app. There is also a browser extension that works on Edge, Chrome, and Firefox.

Surfshark promises fast connection speeds, and it truly delivers, thanks to its global VPN server network which includes 3,200+ VPN servers in 100 countries.

As a user, you can get access to worldwide content by connecting to this VPN for Ethiopia. Whether you want to access the geo-restricted Netflix USA library, or stream Hulu, HBO Max, and Amazon Prime Video globally, Surfshark does it all.

It works well for bypassing censorship in strict countries like Ethiopia with its NoBorders and Camouflage modes that disguise VPN traffic to evade detection. The VPN app supports IKEv2, OpenVPN, and Wireguard and uses the AES 256-bit standard for encryption.

Surfshark offers a 30-day money-back guarantee on all VPN plans and resolves customer queries via a 24/7 live chat and email service.

As quirky as the name might be, HideMyAss is a worthy contender to be on this list. The VPN provider has the most VPN locations worldwide, with 210+ countries and 290+ locations. And HideMyAss is the only VPN provider that has a VPN server in Ethiopia.

What does that mean for you? You can access content from other regions and stay connected to native content by connecting to HMA's Ethiopia VPN server if you travel abroad. HMA's list of 1,070+ VPN servers includes 2 VPN servers in Ethiopia alone.

When it comes to speed, this VPN's 20Gbps servers prove exceptional in delivering a fast and reliable streaming experience. You can unblock popular streaming services, such as Hulu and HBO Max, from anywhere in the world.

HideMyAss protects your privacy with a zero-logs policy and your purchase with a 30-day money-back guarantee. Its 5 simultaneous connections can be used to connect from platforms like Windows, Mac, iOS, Android, and routers.

Customer support is available 24/7 via live chat and email to assist you.

Why Do I Need a VPN in Ethiopia?

You need an Ethiopia VPN to bypass censorship and hide your online activities. A VPN makes your data secure against eavesdroppers through encryption. That means your Internet provider and the government can't track what websites you visit. Thus, they cannot filter and block your requests.

Here's a more in-depth explanation of why using an Ethiopia VPN is a great idea:

Can I Use a Free VPN In Ethiopia?

Yes, you can use a free VPN for Ethiopia. But we do not recommend it for various reasons.

A free VPN is a huge risk to your privacy. They are notorious for selling your data to advertisers to keep their services running. As you already guess - if the service is not charging you directly, it must be making money in some other way. Your Web activities will be sold to data brokers, who then use this data for targeted advertisements.

Moreover, a free VPN simply does not provide the same level of experience as a paid VPN. You can expect slow performance, fewer VPN servers, limited bandwidth usage, weak encryption, and limited server switching. So, even Web browsing can be an issue, due to how slow free VPN services can be - which is what you'll want to avoid.

A VPN is the solution to your privacy woes on the Internet. Considering the persistent threat to online privacy in Ethiopia (as well as worldwide), a VPN will give you the much-needed power to reclaim freedom on the internet.

As our #1 ranked Ethiopia VPN, ExpressVPN (Try 30-day money back gurantee) features all the necessary ingredients for a safe and secure web experience. It uses AES 256-bit encryption to secure your data, has servers globally, and also comes with a generous 30-day money-back guarantee. It fared the best in our speed tests as well.

In the end, we'll also recommend visiting our best VPN guide if you'd like to expand your search.

Is VPN Illegal in Ethiopia?

No, VPNs are not illegal in Ethiopia. You are free to pick and connect to a reliable Ethiopia VPN that bypasses censorship on social media and VoIP services.

Which VPN Works in Ethiopia?

ExpressVPN, NordVPN, CyberGhost, Surfshark, and HideMyAss all work in Ethiopia. HideMyAss also operates a group of VPN servers in the country.

Does ExpressVPN Work in Ethiopia?

Yes, ExpressVPN works in Ethiopia, even though it doesn't offer servers in the country itself. It's our best-rated VPN for Ethiopia for speed, features, and reliability.

Does NordVPN Work in Ethiopia?

Yes, NordVPN works well in Ethiopia. It doesn't have servers in the country, but you can connect to any VPN server abroad to bypass online censorship.

That wraps up our list of the best Ethiopia VPN services. Let us know via the comments section if you have any questions. Thanks for reading!