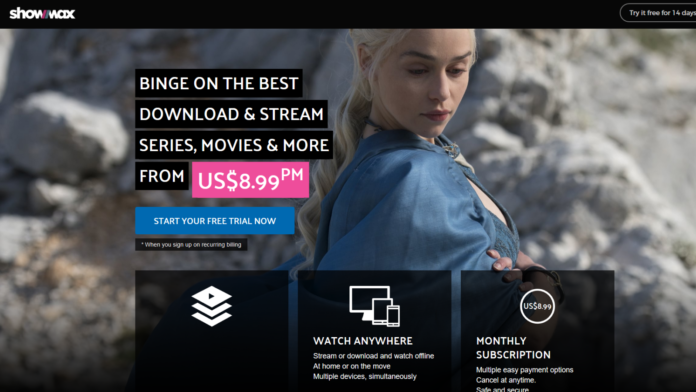 Coming from South Africa, Showmax is a relatively young media streaming service. However, thanks to its rapid expansion, it now successfully competes with Netflix in a whole range of African countries. With countless movies and TV shows to watch, user-friendly UI, and friendliness toward slower Web connections, Showmax has quickly become the most prominent new Web service across Africa.

The problem with Showmax is that it's accessible from a range of select countries. However, this problem is alleviated by a simple solution - called VPN. These applications can overcome geo-restrictions and they can help you watch Showmax anywhere in the world. The only question is - which VPN can unblock Showmax?

It's worth noting that we already have comprehensive articles on the best VPNs for South Africa, as well as our overview of the best VPNs right now. However, Showmax has become increasingly hard to unblock, which is why we wrote this dedicated article. So, let's jump to what you truly want to know.

Here are the top 3 best VPNs for unblocking Showmax anywhere in the world!

With 3,600+ servers spread across the globe, you can be sure that CyberGhost will take you to any corner of the planet. And thanks to high-end security features, it's no wonder that CyberGhost can successfully unblock Showmax, no matter where you are.

The latest version of this VPN brings an in-depth overhaul to its UI. Even first-timers won't have any trouble using it, and there's a whole range of specialized servers as well. And let's also not forget that you can use this VPN on a range of popular devices, including Windows, MacOS, Android, iOS, and plenty more.

If you're intrigued by this VPN, don't hesitate to visit our hands-on review of CyberGhost VPN. This is where you'll find all the information you need.

PureVPN is another awesome tool you should definitely take into consideration. With over 2,000 servers available in some 140 countries, you can be sure that PureVPN has the right ones for any Showmax platform you may want to check out, including the South African one.

The tool offers users a split tunneling feature, which means that you can direct only certain traffic through the VPN's servers, while the rest goes through your regular ISP's pipes. If any downtime happens, you can relax because there's a kill switch available.

The VPN works on a number of devices, including Windows, Mac, Linux, Android, iOS, as well as a bunch of Smart TVs, or gaming consoles. Make sure to read TechNadu's PureVPN review for all the details you may be missing.

Another great tool for anyone who's looking to jump from one area of the world to the next is TorGuard. This one features over 3,000 servers in over 50 countries, South Africa included.

The app comes with a zero-log policy, so you can rest assured that none of your data ends up in anyone's hands since it's not even saved on the VPN's servers. And also, it comes with high-end features that won't only protect your data, but let you get virtual IPs and unblock new types of content, Showmax included.

TorGuard works on a wide range of devices, including Windows, Mac, iOS, Android, and Linux, to name a few. You could read our TorGuard review for more information before making a decision.

What Else to Know About Unblocking Showmax?

There are loads of things you should know about Showmax and if you have no first-hand experience with it, we're sure you want to know everything. So, to help you out, we're going to give you all the info you need before moving forward.

Coming straight from South Africa, Showmax is a video-on-demand platform that's a direct competitor to the likes of Netflix and Amazon Video. It focuses on local content, but it's not limited to it by any stretch. The platform comes with loads of interesting features, including downloads for offline viewing, child-friendly profiles with multiple age settings and more.

Where is Showmax Available?

So, in case you don't live in one of these countries, you should get a VPN to help you out. You should also try out a VPN if you want to try out the Showmax content from a certain country.

What Devices Can You Enjoy Showmax On?

The whole point of paying for Showmax, or any video-on-demand service, in fact, is to be able to watch content anywhere you are. Thankfully, Showmax comes with support for pretty much any platform.

The platform allows users to watch content on up to two devices at once, but you can register five devices to your account.

What Can You Watch on Showmax?

The list has no end when it comes to the things you can watch on Showmax and there's a good reason why this is such a good competitor for the likes of Netflix and Amazon Video.

Game of Thrones, Vikings, Arrow, Friends, South Park, Criminal Minds, Westworld, Suits, True Blood, Vampire Diaries, and Mr. Robot are just some of the TV series available. If you're looking for cool movies, you can try out The Hobbit, various Mission Impossible movies, Divergent, Mean Girls, The Girl With the Dragon Tattoo, True Grit, or Les Miserables, to name a few. Even kids can enjoy animations like Hop, Valiant, Shark Tale, Over the Hedge, Arthur, or even Paw Patrol, Dora the Explorer, and Fireman Sam seasons. There's even some reality TV has thrown in or TV series like Top Gear. The bottom line is that you'll certainly find something to watch if you look around a bit.

How to Watch Showmax Without the Geoblock?

If you want to make sure you can watch Showmax no matter where you are, or try out content from other countries where the platform is available, you'll need a VPN. VPN is short for Virtual Private Network and it's a tool that can change your IP address to make it look as if you're browsing the Internet from a completely different location, all the while encrypting your data and offering online privacy.

VPNs come with pretty intuitive interfaces, so you don't have to wonder too long how to get the app going. Nonetheless, if this is your first time trying out this type of apps, we'll guide you through the process.

We hope you found this guide to be useful and that you'll now be able to easily watch Showmax no matter where you are.

Let us know what VPN you ended up choosing and what country are you watching Showmax from in the comments section below. Please share the article if you can and visit TechNadu on Facebook and Twitter.