XUMO.TV Kodi Addon: How To Install It on Kodi 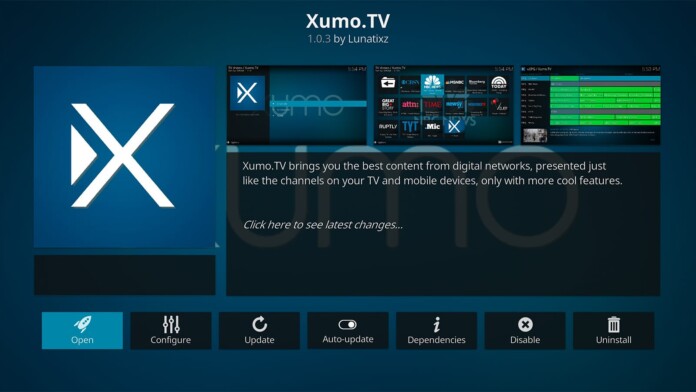 Thanks to a number of proven live TV Kodi addons, streaming TV channels live on Kodi is an easy possibility. A good example of that is the XUMO.TV Kodi addon, which comes with a huge number of channels and themed live streams - available free of charge.

XUMO.TV isn’t a "traditional" OTT platform, which means you won't find standard TV channels here. Brands such as NBC, ABC, CBS, Bloomberg, Newsy, and Cheddar offer their live streams via XUMO (focused on certain themes and types of content), all of which are available via Kodi as well (over 150 channels in total).

On top of that, XUMO.TV offers an on-demand library as well, containing newscasts, movies, TV shows, and more. Those videos play in up to 1080p on Kodi, which makes the XUMO.TO Kodi addon one of the best of its kind.

When watching live TV via Kodi – you HAVE TO use a VPN! That’s the only way to secure your use of Kodi while getting extra content as well. Here’s what VPNs bring:

How To Install XUMO.TV Addon on Kodi

Ready to add dozens of live channels to your Kodi? Well, all you need is to install the XUMO.TV addon - and here's how that is done:

XUMO.TV is available in the United States, Canada, France, Germany, the UK, Italy, Spain, Brazil, and Mexico. If you're in some other country, you can use ExpressVPN to unblock XUMO.TV.

1. Find Kodi on your device and launch it by selecting its icon.

2. Then, select 'Add-ons' using the main menu (on the left side of your screen).

4. Navigate to 'XUMO.TV' by scrolling all the way down. Select the addon.

5. The addon’s overview will now open. Use the 'Install' button on the right.

7. The XUMO.TV Kodi addon will now install. Wait until you see a notification.

8. Return to Kodi’s home screen and then, once again, select 'Add-ons.'

10. Finally, launch the addon by clicking on its icon. That’s it!

That would be all on how to install the XUMO.TV Kodi addon. In case you have any questions or doubts, make sure to post your comment just below. Finally, thanks for reading!