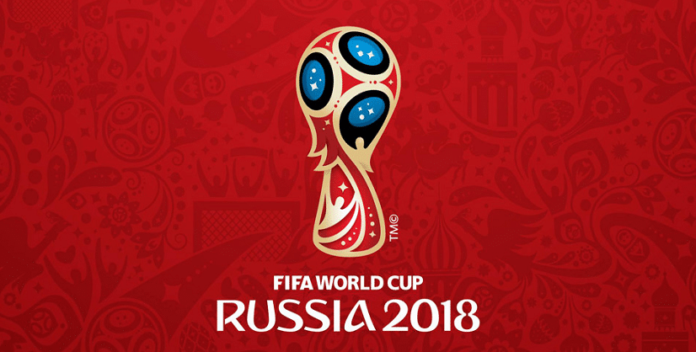 The FIFA World Cup is the most watched sports in the world with more than 30 billion people live streaming the entire season. The National teams of Federation Internationale de Football Association Members take part in these matches. It started way back in 1930 with this year marking the 21st World Cup. Now with our guide, you can start watching World Cup 2018 Online without cable right from anywhere in the world.

Also, 209 teams played 878 Matches, and only 32 top bests were chosen from 6 different confederations. Now here are the countries that cleared the Preliminary qualifiers that can play in the world cup.

Once the matches start, there are two stages. First Stage – The teams divided into groups face the other 3 group members in a total of 3 matches. Once they are shortlisted then followed by Round of 16, Quater Finals, Semi-Finals, 3rd-Place playoff, and the Grand Final. Download the Match Schedule and never miss a game.

The Final match is all set to take place between France and Croatia on July 15, at Luzhniki Stadium in Moscow. Here are the scheduled start times around the world.

The Bronze medal goes to Belgium after their victory over England on the 3rd place play-off on July 14th. Will Croatia turn victorious on its first final ever or can France take home the cup for the 2nd time? While today’s final match will decide the ultimate winner and runner-up of this year’s Fifa World Cup. Now lets get on with the guide. 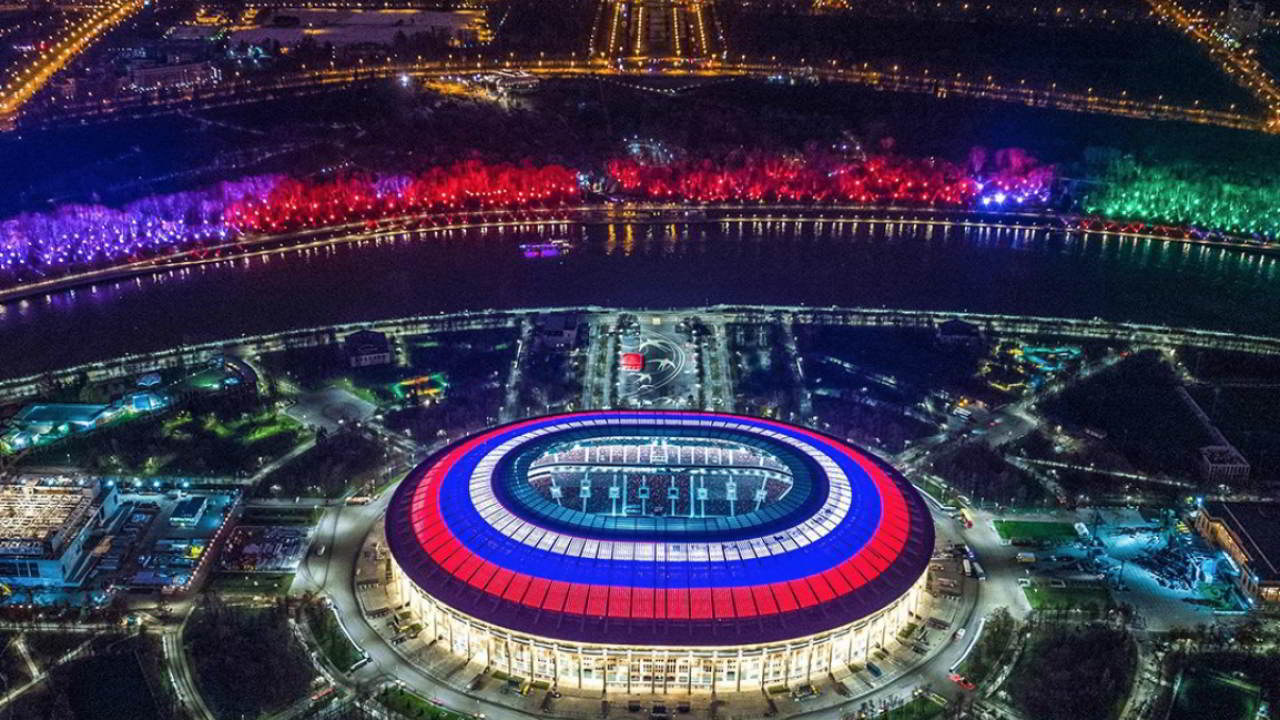 How to Watch FIFA World Cup 2018 Without Cable from Anywhere?

Any regular streamers might have come across this issue, geo-location blocking or region-restriction often that doesn’t allow channels to stream outside a particular location which might apply to all FIFA broadcasters irrespective of country. Its done by streaming services because to avoid higher bandwidth utilization. Even a paid subscribers can’t watch their channels if they aren’t available in those regions or some areas of the country due to unavailability. So there are simple steps we followed to get access to these channels and bypass restrictions.

In general, a Virtual Private Network helps to change your geo-location virtually. If a streaming service is only available in US, then any IP Address that points to US location lets us stream the channels without any restrictions. Follow the steps below.

Below is the list of services that allow you to live stream world cup but before choosing any service, Launch ExpressVPN at the start for an uninterrupted experience.

Want to watch your favorite matches on a bigger screen? Times are changing. People are going mobile. No one has the time or luxury to stay in one place and watch them on their Traditional Cable TV. So we have curated the list of options that cover almost everything an average TV viewer will need.

The broadcasting rights for US TV from 2015-2022 has been given to Fox and NBCUniversal’s Telemundo (Spanish). While in the United Kingdom, BBC and ITV hold the right to telecast on the Cable. 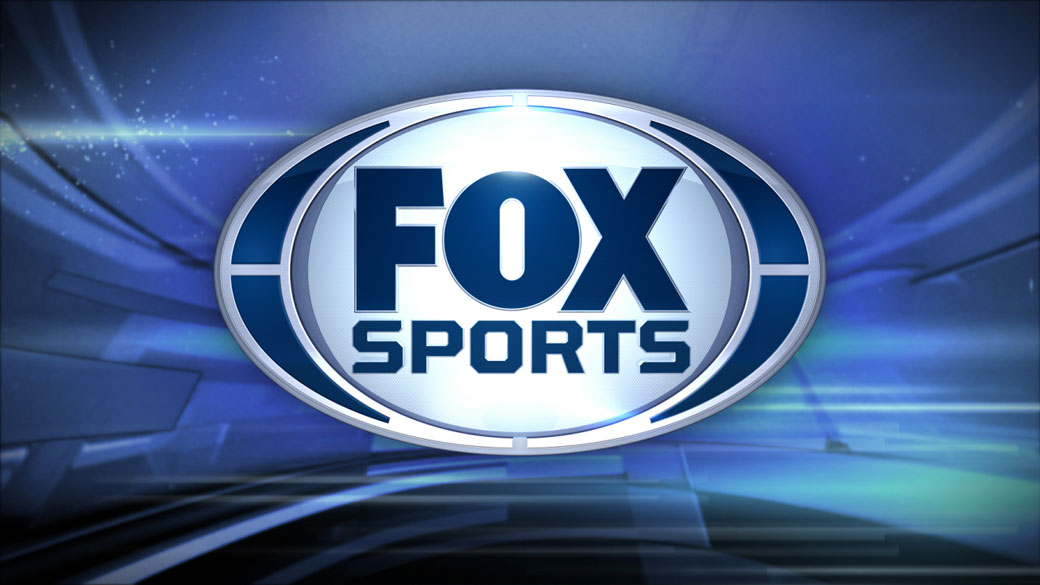 All the games will be live on the Fox Networks channel, Fox Sports. The Live coverage started from Thursday, June 14, 2018, at 11:00 AM ET. To watch Fox Sports, you will need a Cable TV Subscription from your Provider. If you have one either you can watch the matches live by visiting the Fox Sports Go which can be installed on iOS, Android, Kindle, Windows, Roku, Apple TV, etc. Else you need to buy a Fox Soccer Match Pass, i.e., Monthly Pass – $19.99/Mo and Annual Pass – $139.99/Yr (excluding taxes).

Even with the pass, you can only watch Football championships like UEFA Champions League, FA Cup, Europa League, etc. but is it worth your every penny?

Because you can get more Live TV Channels for way cheaper that includes Fox Sports and Sports Channels.

Never miss out a game since watching Live TV can’t get more exciting than this even on the move. Recent times, Cord-Cutting which is cheaper has replaced the traditional TV that gives the flexibility and on-demand content anywhere, anytime. So here are the best services for streaming world cup 2018 live. 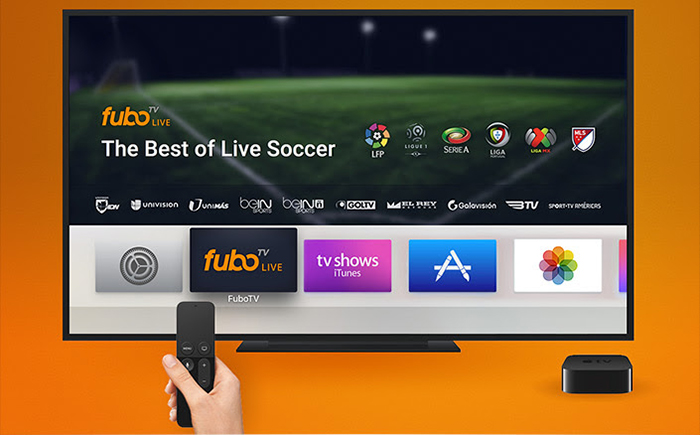 When it comes to Live TV, FuboTV is a Powerhouse for Sports Channels that produces best shows and gives full coverage of NBA, College Football, NFL, NHL, Rugby etc. Fox, NBC, CBS are quite popular in this category. Now record with Cloud-DVR and watch on any device like Roku, Chromecast, Amazon Fire TV, Apple TV, iPhone, iPad, Android, Windows, Xbox etc. Get an exciting 7-days free trial period after that you will be charged $19.99 First Month. Sign up today. 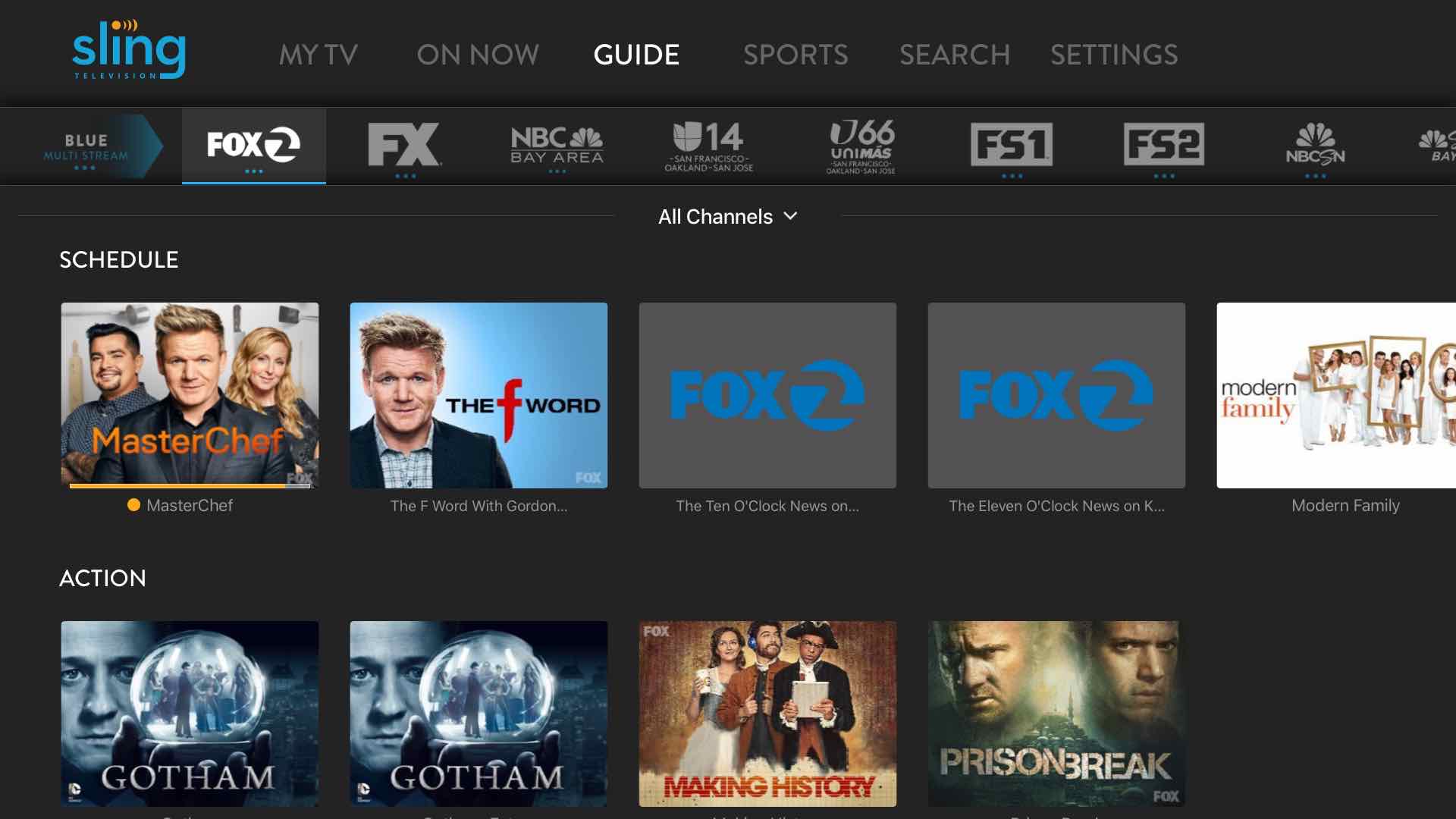 Like its Motto, “TV on your Terms” is fulfilled by Sling TV which is also cheaper than the other services in the market. Still, it provides channels from various categories like Sports, Entertainment, Comedy, News, Movies etc. Even get Local Channels of Fox, NBC, ABC Networks. All the Fox Channels are available in Sling Blue package that costs around $25/Mo and you can even customize your TV Streaming with Sports Extra for more dedicated channels. Start your 7-day trial right now. 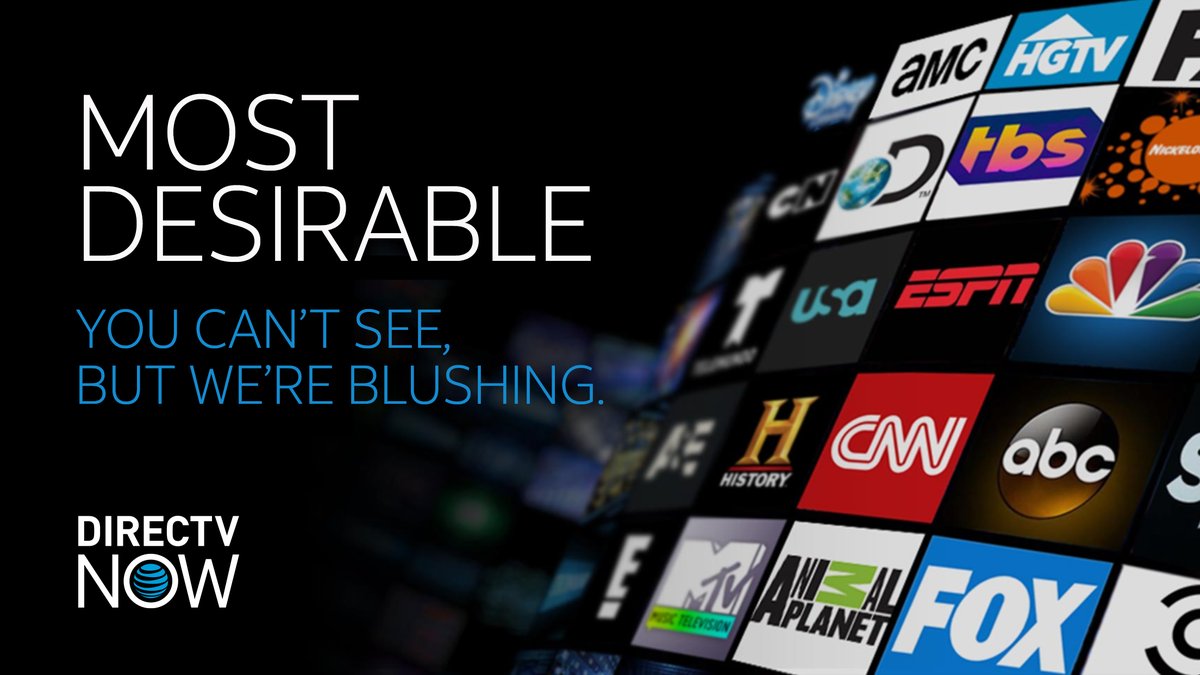 The AT & T owned DirecTV Now streaming service launched back in 2016 has grown tremendously in the recent year. The Service offers users more than 60+ Channels in its basic pack “Live A Little” for $35/Mo. Every now and then it has exciting offers like recently $10/mo for the first 3 months. Even though DirecTV Now charges more than other services but it contains more channels along with a trial period of 7-days. 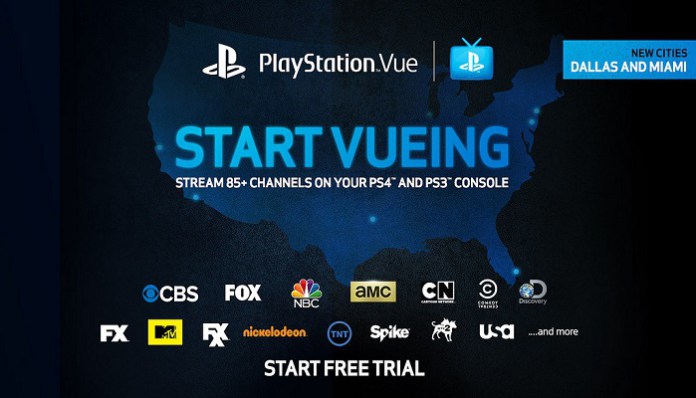 Almost similar to other streaming services but primarily PlayStation Vue was first introduced only for PlayStation users later they were made available on all platforms. Packages from top to bottom all the packs – Access, Core, Elite, and Ultra get all the channels to stream FIFA World Cup Live. Get 5-days free trial for $39.99 and allows you to cancel at any time. 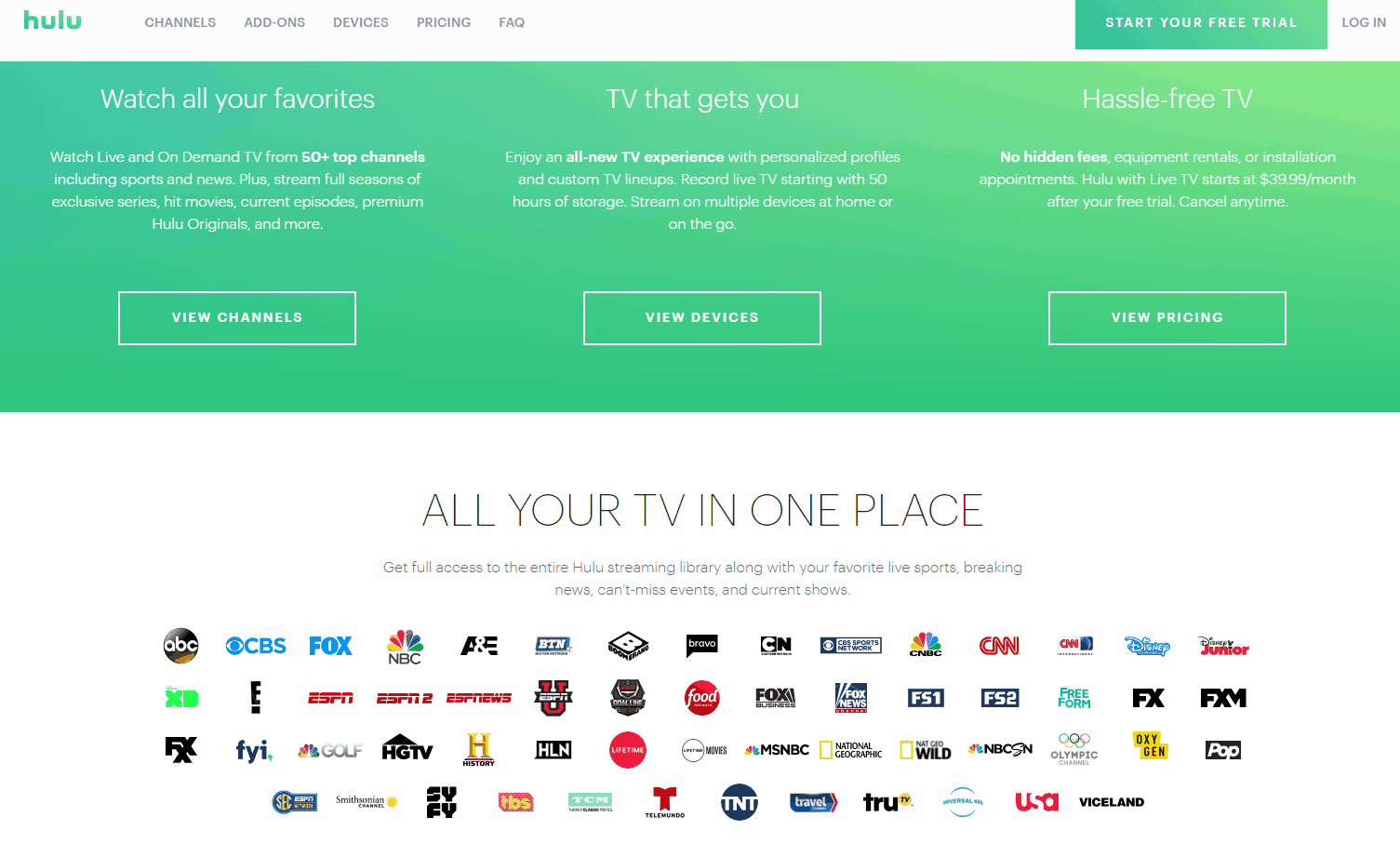 The ever-popular NetFlix is most of the time compared with Hulu since providing better streaming library and its newest expansion came with Live TV. Now get Hulu Live TV exclusively for $39.99/Mo supporting various devices and Operating Systems. Get Enhanced Cloud DVR, Premium Networks, Unlimited Screens. Get a week for free. Also before you buy, check out the channels in your region by entering your zip code.

No more running out of storage space with Cloud DVR-enabled YouTube TV. The rise of Cord Cutting has made the tech-giant to start a streaming service. More than 50+ Networks and Channels are available. Lets you watch up to 3 devices simultaneously and 6- accounts per household. Membership costs $40 and available in selected cities. Even Additional networks like Fox Soccer Plus is available for an extra $15.

Hope our guide was pretty much helpful and direct to clear your doubts and problem. Now you will be able to watch FIFA World Cup without cable. Also, Share this guide with your fellow football fans around the world.

Share your thoughts on how this worked out for you? We are open to suggestions drop them in the comments below. Subscribe to our Newsletter and Follow TechNadu on Facebook to get instant updates.

Hacker Forum ‘OGUsers’ Hacked for the Third Time in Its History

Someone has exfiltrated the ‘OGUsers’ database once again, selling its contents for $50 to $100.The hacker is even offering the entire database...
Read more
Scams

Thousands of “money mules” were identified and arrested this year across the globe.These people are now facing criminal prosecution, imprisonment sentences, and...
Read more
Motherboards

The Ryzen 9 5900X from AMD is the company’s second most powerful chip of this generation, with only the 5950X being above...
Read more
TechNews