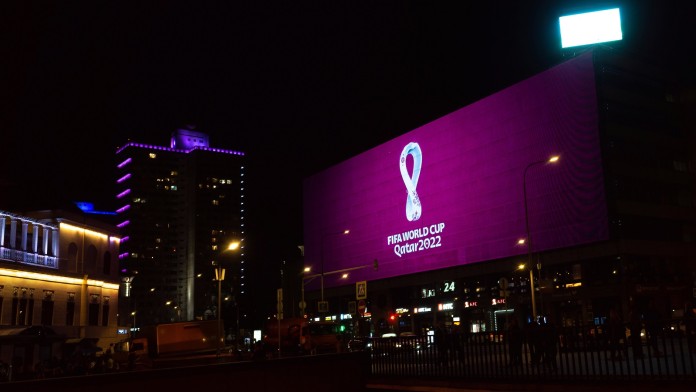 The biggest event on the planet kicked off on November 20th, and the fire for glory would remain ablaze till the final on December 18th. There are a total of 64 incredibly entertaining matches scheduled on the table, and for the viewers who are not visiting Qatar to catch up on the action, what better way than watching FIFA World Cup 2022 in 4K.

Yes, you can watch all the World Cup matches in 4K anywhere around the world if you know how. This means your favorite players - Mbappe, Benzema, Ronaldo, Messi - will come alive in your living room in pixel-perfect high definition. However, there are only a handful of networks that are broadcasting this World Cup 2022 in 4K. Our favorites 4K streams are BBC iPlayer and Fox Sports.

These streaming services, however, don’t make it easy for fans outside their home countries to watch World Cup 2022 for free. Thanks to the wonders of technology, you could now use a reliable VPN to view FIFA action from anywhere. A VPN does that by spoofing your location and tricking the sites and services so that they think you’re in the home country.

In this guide, we will walk you through setting up a World Cup VPN and list down some of the best services for streaming FIFA in 4K alongside answering some related crucial questions.

Argentina might have unpredictably lost its first match against Saudi Arabia, but the World Cup has just begun. We are expecting to be on our toes until the last whistle of the finals. Maybe it holds more surprises than we can handle, and if we want to stream the world's greatest spectacle - the 2022 FIFA World Cup - in 4K HDR, BBC and Fox Sports are undoubtedly the safest options.

However, if you are traveling abroad or just staying outside the home countries of these streaming services, you will need a VPN to watch the World Cup 2022 in 4K HDR. But be aware, not all 4K streaming services are reliable, nor do all devices support them, nor do all of them come without fluffy subscription prices. This is why getting all the actions without a hint of low-rest nastiness could be tricky, especially when hundreds of millions are also congesting the servers.

fuboTV is another 4K service that made it to our list for its multinational presence in North America and Europe. Fortunately, the service has maintained a unique position in the marketplace and is fairly apt at streaming sporting events in 4K, including FIFA.

All of the mentioned streaming services can be unblocked from anywhere with the help of a VPN, which you can set up in minutes. We rate ExpressVPN as our top recommendation for World Cup 2022. It’s robust, safe, and, best of all, comes with a stress-free 30-day money-back guarantee alongside offering fast connections from all around the world. During our testing, we could unlock all the best World Cup 2022 streaming services without any streaming errors.

If you are interested, you could head straight to ExpressVPN’s subscription page and sign up for the service. If you pick the right plan, you could even get a 49% discount this season with 3 months free, which should be enough to stream World Cup 2022. After subscribing, simply download the services on your 4K devices and connect using a server in the relevant country. Once the connection is established, you can watch the World Cup 2022 in 4K HDR from anywhere around the globe.

Can you get World Cup Live Streams in 4K for Free?

As long as you have a fast internet connection, a 4K TV, and access to a streaming service airing the tournament in truly 4K HDR format, you should be good. Fortunately, we don’t have to put up with the 1080p World Cup streams anymore or upscaled versions of it.

This means that you need not worry if you are ticking all the prerequisites and live in the US, the UK, or India, where the local services are showing every game live in 4K HDR, free of cost.

BBC iPlayer has confirmed to air 33 matches in total, including the World Cup semi-finals and finals. The good news is that all of these 33 matches will be streamed in native 4K HDR. The story is similar for Fox Sports in the US and JioCinema in India. Both services have announced to air all 64 World Cup matches without compromising the streaming quality.

All of the mentioned services have cross-platform compatibility, which means you will be able to use these services on all your 4K compatible devices, from phones to 4K TVs - making it easy to stream the football action right from your couch.

If you are not in the US, the UK, or India but still want to watch Qatar 2022 World Cup, you can use these streaming services using a VPN, which changes your physical location and trick the computer into thinking you are in the home country.

Where to get World Cup 4K Live Streams in the USA?

Fox is the official broadcaster of the 2022 FIFA World Cup in the USA and will air the matches on Fox Sports and FS1. fuboTV includes both Fox and FS1 with its 69.99/Mo subscription. But fuboTV has more to stream than just the 2022 FIFA World Cup. With a huge catalog of blockbuster films, Live TV, and sporting events, this one is a great investment for any streaming fan in the US, Canada, France, or Spain.

Additionally, if you are traveling outside the regions where fuboTV is not available, you could use a VPN to change your location. A VPN could successfully do that by providing you with a virtual IP address and, thus, help you unblock geo-restricted sites and services. This means, regardless of where you are, you could stream the World cup 2022 on fuboTV. On the other hand, viewers could switch to Telemundo for World Cup matches in Spanish.

There are other services like Sling TV and Peacock that could do an equivalent job in the US. However, these platforms may not be very good for streaming when it comes to 4K. They only offer certain content in 4K HDR quality, and whatever they do have are notoriously hidden behind a premium plus paywall.

Still, viewers can enjoy some free World Cup games on Peacock, as well as watch replays of every soccer game free on Tubi. You may, however, need a VPN service to unblock them outside of the US. Once again, ExpressVPN is the number one contender for unblocking World Cup 2022 streams in 4K.

Can you Watch World Cup in 4K from Australia?

Yes, technically, you can watch World Cup in 4K from Australia. Though you will need a reliable service like ExpressVPN.

The local FIFA broadcaster, SBS on Demand, has confirmed not to air the matches at 4K but only at HD. The service, however, is free of cost and is one of the most reliable ones. You could definitely use it as an alternative when 4K services are congested or struggling with downtime, which is bound to happen to see how things went in the first week.

But if you must stream in 4K, in this guide, we have consistently insisted on services that are already airing matches in 4K HDR - like BBC iPlayer and FOX. The services may not be accessible in your home country, but you can simply bypass the block with a VPN.

Of course, the most fundamental prerequisite of streaming Qatar World Cup 2022 in 4K is a 4K compatible TV. If you already do not have one, FIFA is probably a good excuse. Even if you have a tight budget, you will be surprised how affordable the 4K televisions have gotten. Especially with Festival deals still running.

This means you can buy one of the best 4K TVs for a bargain before the World Cup ends, and we have recommendations across the premium spectrum. The three most popular choices have topped the best TV charts throughout this year - LG C2, Hisense U8H, and Samsung Q60B. Apple TV 4K is also a great option, too. Already own an Apple TV, then check our guide to watching World Cup 2022 on Apple TV.

We suggest going through their reviews on the internet before settling on one - though our favorite one is LG C2, which offers a stunning OLED display alongside Dolby Atmos and Gen5 AI processor. As far as sizes are concerned, you could go from 42 inches right up to 83 inches. If you want the biggest and the best, this one is it.

Yes, you should plan to buy a 4K TV for World Cup for the best experience. However, it is not necessary.

The good thing about the major streaming services is their compatibility with numerous devices. Apps for BBC iPlayer, Fox Sports, FuboTV, and Tubi are widely available on all sorts of platforms, including Amazon Store, App Store, Play Store, Roku, Xbox, Playstation, and Chromecast. Even if you do not have a 4K-compatible TV, you could easily stream matches in 4K supporting iPhones, Smart devices, and laptops.

Having that said, the best experience is arguably on 4K TVs, and there are several options you could use, including; LG C2, Apple TV, Hisense, LG TV, and Samsung Smart TVs. You can also cast the 4K matches on your normal TV using a casting device of your choice - maybe use a 4K Fire Stick or Chromecast. But of course, the quality, however, may take a hit if your TV is not 4K compatible.

Can You Watch World Cup Games on ITV in 4K?

No, ITV is not airing its share of 32 matches in 4K HDR picture quality. However, you could enjoy BBC's share of matches, including the semi-finals and finals, in pixel-perfect quality on BBC iPlayer.

Along with the live telecast, the FOX Sports family of networks and BBC iPlayer will also air the replays of the tournament in the English language. You can also stream full replays on Tubi for free.

That would be all on how you can watch World Cup 2022 in 4K HDR for FREE. If you have any questions, know that we’re here for you. So, make sure to use the comments section below. Thank you for reading!