Which VPNs Are Owned by Kape Technologies? 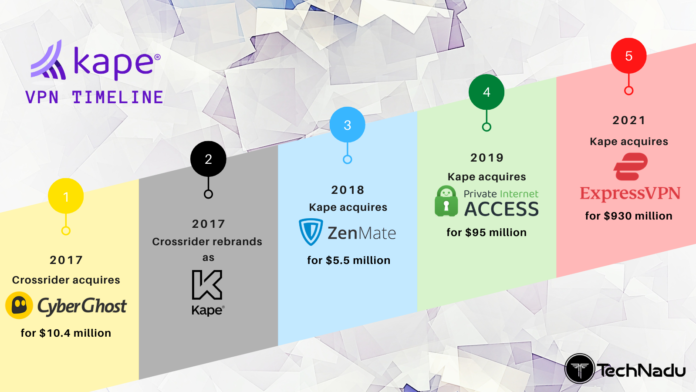 After a series of high-profile acquisitions, Kape Technologies became one of the most significant companies in today’s global VPN market. This corporate entity now owns a number of widely used VPN services, which have around 6 million users combined. So, which VPNs are owned by Kape Technologies? And more importantly, can you trust Kape Technologies to preserve and protect your privacy? Let’s find out!

Which VPN Services Are Currently Owned by Kape Technologies?

In 2017, Crossrider announced its acquisition of CyberGhost VPN for $10.4 million, a VPN that was initially founded by a German/Romanian company called CyberGhost S.A. (it’s still based in Bucharest, Romania). What’s crucial to mention is that Kape Technologies' earlier name was Crossrider. That change happened in 2018, during a period when Crossrider was transforming and shifting its focus to cybersecurity.

However, Kape’s beginnings go all the way back to 2011, when the company was founded with the initial focus on "the provision of Web browsers and advertising technology." It took less than a year for that corporate entity to be acquired by Market Connect, a company controlled by Teddy Sagi (one of the key persons behind Kape Technologies, even today). Then, that company went on to become Crossrider and, later on, Kape Technologies.

The latest name change came as a result of justifying the acquisition of CyberGhost VPN and trying to persuade the VPN’s subscribers to remain loyal. That’s because Crossrider used to serve malware in the form of adware, taking advantage of people’s privacy. As per the reports by Microsoft, Trend Micro, and Malwarebytes, Crossrider’s digital creators were involved in browser hijacking, malicious software bundlers, adware, and other monetization methods.

Today, CyberGhost VPN’s Terms of Use make no mention of Crossrider or Kape Technologies. Instead, a company called CyberGhost S.R.L. is mentioned, which is an obvious attempt to hide the VPN’s corporate background.

Finally, we’d like to note that CyberGhost VPN publishes regular transparency reports, which is a welcome thing to see. However, unlike other VPNs, CyberGhost VPN isn’t willing to go through an independent audit, making it harder to trust this VPN service.

Then, in 2018, Kape Technologies decided to acquire ZenMate VPN for $5.5 million, which used to be a VPN service used by 45 million individuals based in Germany. Today, we expect that ZenMate’s userbase is even bigger, as this VPN has managed to keep its prices quite affordable while also bringing new sets of features in the meantime.

Upon the acquisition, it was announced that both CyberGhost and ZenMate VPN would remain two separate business entities, and it appears that Kape Technologies is still sticking to that plan. Even though there are many overlaps in terms of individual VPN features between CyberGhost and ZenMate, they have remained two distinct VPNs.

Still, it’s worth mentioning that ZenMate VPN’s website is doing its best to present itself as an independent VPN service. For example, you can read personal notes written by ZenMate’s original founder. And also, ZenMate’s Terms and Conditions mention ZenGuard GmbH (registered in Übach Palenberg, Germany), trying to hide its connections to Kape Technologies.

In a rather surprising move, Kape Technologies acquired Private Internet Access in 2019 for $95 million. Before that, Private Internet Access (PIA) was a highly respected VPN service known for its no-logs policy. In 2018, PIA was pressured by the FBI to hand over any logs or sensitive data pertaining to a local hacking case in San Jose. However, PIA proved that it had no records to hand over.

Naturally, that was a big win for Private Internet Access, especially since this VPN is based in the United States, known for its aggressive data surveillance and data retention laws. More than a year after that event, PIA agreed to be acquired by Kape Technologies.

We want to mention that even after being acquired by Kape Technologies, PIA remained loyal to its principles. Until proven otherwise, it looks like Private Internet Access still collects no logs and has a very user-friendly privacy policy. On top of that, this VPN has been doing a lot to overhaul its interface, reach more devices, add thousands of servers, and plenty more.

Finally, we come to the final and current acquisition of Kape Technologies, which happened in September 2021. And yes, we’re talking about the ExpressVPN acquisition, which brought around 3 million customers to Kape Technologies (the purchase was priced at $930 million).

The company’s latest acquisition was the most surprising one yet. That’s because ExpressVPN is one of the most widely-used VPN services today, known for its privacy-protecting features, the ability to unblock any website, and more. It was nearly impossible to imagine that a VPN such as ExpressVPN, backed by years of pristine reputation, would agree to be acquired by a company that used to distribute malware and target individuals.

However, that's precisely what happened. Also, ExpressVPN recently had another problem when a report started circulating about the VPN's CIO, Daniel Gericke, who turned to have helped build the UAE’s Karma hacking system. ExpressVPN responded by confirming the facts from the report, saying that Gericke’s involvement with intelligence organizations was never seen as a problem.

With that said, it's clear that ExpressVPN is in a challenging position right now. Only time will show this VPN's true worth. However, based on our experience of using ExpressVPN for quite some time, we hope to see it remain loyal to its principles - if something like that is still a possibility.

Does Kape Technologies Own Any Other Companies & Businesses?

Ever since its Crossrider days, Kape Technologies has been acquiring other companies and different types of businesses, resulting in a number of subsidiaries.

Some of the earlier acquisitions of Kape Technologies were Ajillion LLC, Definiti Media, Reimage, DriverAgent, Intego, Restoro, and WebSelense. All of those were (and some of them still are) software products specializing in a wide range of fields – everything from building ad networks, cloud-based business solutions, up to service-level Windows maintenance tools.

However, when it comes to "other businesses," we must mention that Kape Technologies is the owner of the websites such as VPNMentor.com and Wizcase.com – both of which specialize in VPN reviews. As you can already guess, both of those websites now heavily focus on the VPNs owned by Kape Technologies, having more than 6.1 million monthly visitors.

Therefore, it's evident that Kape Technologies is more than willing to dive into less-than-honest practices, as we can clearly see a direct conflict of interest here. That doesn't provide a positive signal to anyone who signs up for any VPN owned by this company.

Is Kape Technologies a Trustworthy Company?

Based on everything said so far, it’s clear that Kape Technologies is a highly complex corporate entity. As such, calling it "trustworthy" would be impossible at the moment.

Some of the key individuals behind Kape Technologies are Teddy Sagi and Koby Menachemi. Sagi is a serial entrepreneur worth $3.6 billion. He’s known as the founder of Playtech and SafeChange International, specializing in gambling and payment processing. Sagi also spent nine months in jail in 1993 for "grave deceit, bribery, and insider trading." And more recently, he was named in the Panama Papers that detail a "rogue offshore financial industry."

Koby Menachemi has been connected to Israeli intelligence and cyber espionage, as he was part of Unit 8200 (working for the Israel Defense Forces), where he was a developer for three years.

Finally, let’s remind you that Kape Technologies currently owns CyberGhost VPN, ZenMate VPN, Private Internet Access, and ExpressVPN. So, after knowing who runs Kape Technologies and knowing about this company’s dubious practices, would you put your trust in any of those VPNs?

Let us know your thoughts about Kape Technologies and the VPNs this company owns via the comments section below. And lastly, thank you for reading!