Japanese Animated Film Classics Kodi Addon: How To Install It on Kodi 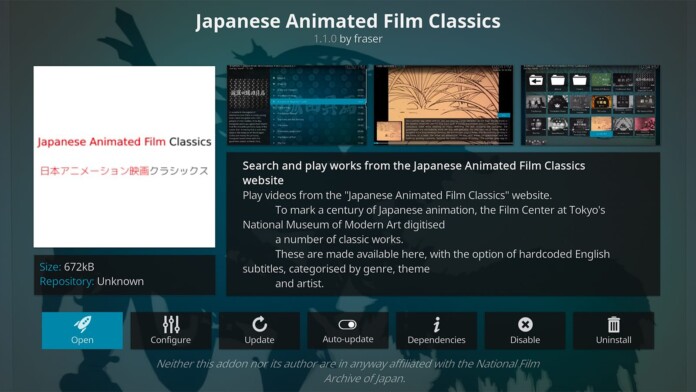 Aside from offering plenty of entertainment, Kodi comes with an educational purpose as well. As you can imagine, we're talking about Kodi addons here, capable of letting you integrate niche on-demand libraries. A good example of that is the Japanese Animated Film Classics addon, which brings animated content you won't find elsewhere.

We’ve previously talked about this addon in our overview of the best Kodi addons for cartoons. However, Japanese Animated Film Classics is truly something entirely else, brought to us by the National Film Archive of Japan. The addon offers a collection of cartoons, many of which were done using the cutout animation technique. With that said, there is plenty to learn about these short films, whose content is suitable for both adults and children.

And also, keep in mind that we're talking about century-old video content here. Therefore, don't expect the highest possible video quality, especially from the aspect of today's video industry. Still, don't let that stop you from diving into this exciting video library.

When watching cartoons via Kodi – you HAVE TO use a VPN! That’s the only way to secure your use of Kodi while getting extra content as well. Here’s what VPNs bring:

How to Install Japanese Animated Film Classics Addon on Kodi

Here are the instructions on how to install Japanese Animated Film Classics on Kodi:

1. Launch Kodi on your device by double-clicking on its icon.

2. Once you see Kodi’s home screen, select 'Add-ons' on the left-hand side.

3. Then, hover over 'Download' on the left, and pick 'Video Add-ons' on the right.

4. Scroll until you see the Japanese Animated Films Classics addon. Select its name.

5. You should now see the addon’s overview. Proceed to use the 'Install' button.

6. Kodi will now display a list of the required dependencies. Go with 'OK.'

7. Wait until the addon is installed. You’ll see a notification in the top-right corner.

8. Return to Kodi’s start screen. Then, pick 'Add-ons' once again.

9. Select 'Video Add-ons' on the left, using the main menu.

That would be all on how to install the Japanese Animated Film Classics Kodi addon. If you have any questions on your mind, share them via the comments section below. And lastly, thanks for reading!