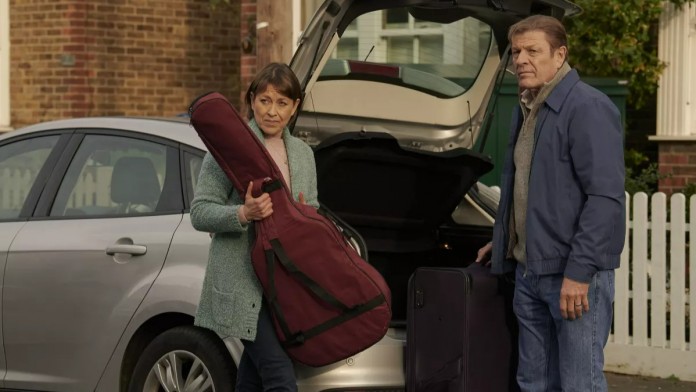 A new highly-anticipated British drama starring Sean Bean (Time, Game of Thrones) and Nicola Walker (Unforgotten) will soon premiere, giving viewers an intimate look at a long-term partnership. We have everything you need to know, so keep reading to find out where, when, and how to watch Marriage online from anywhere.

Marriage focuses on Ian and Emma, who have been married for 30 years, as they navigate the highs and lows of their relationship. Their marriage entails uncertainties, hopes, and anxieties as the series explores the perils and blessings of long-term intimacy. We will get to see the pair bicker, fight, and then laugh together soon after, and the drama is "sometimes funny, sometimes moving, always revealing." The slice-of-life show will deal with the difficulties that strain their marriage as they negotiate redundancy, marital suspicions, and adoptive parenthood.

Speaking about the show, Bean said, "People will be able to see many things that they can relate to in their own lives and their own relationships. There aren’t any big stunts or reveals, it’s just a very simple story, simply told, about people and the complications of daily life."

Sean Bean and Nicola Walker lead the cast as Ian and Emma, and they are joined by Chantelle Alle as Jessica, Ian and Emma’s daughter, James Bolam as Emma’s father Gerry, Henry Lloyd-Hughes as Emma’s boss Jamie, and Jack Holden as Jessica's boyfriend Adam.

Marriage premieres on BBC One on August 14, 2022, at 9 PM BST, and you can also stream the 4-part series on the BBC iPlayer.

How to Watch Marriage Online From Anywhere

When you are at home, you can easily watch your favorite shows on live TV or through a streaming service. Traveling outside of the country, however, will prevent you from using your library because of geo-restrictions imposed by license agreements. You can avoid this issue if you use a VPN to watch Marriage online, as it will allow you to bypass geo-blocks and appear as if you are in your home country.

We recommend ExpressVPN, as it can unblock most streaming platforms like Netflix, Hulu, etc., and has thousands of servers across the globe. This VPN is beginner-friendly and compatible with many devices, such as phones, tablets, computers, routers, etc. It also offers a money-back guarantee, so you can try ExpressVPN for 30 days RISK-FREE. Moreover, it shields you from security breaches and protects your privacy online with strong encryption protocols.

If you want to grab a great deal, go to its website and subscribe to ExpressVPN (49% Discount + 3 Months FREE). After downloading the native app for your device or system, you can log in through a sign-in link sent to your email address or an activation code. Next, choose a server from your home country when you turn on the VPN, and then access a streamer to watch Marriage online from anywhere.

How to Watch Marriage in the UK for FREE

The best way to watch the series in the UK is on the BBC iPlayer. Soon after its BBC One premiere, this title will be available on this streaming service. You can watch Marriage for free on BBC iPlayer, and you don't even have to create an account to watch it. Other BBC titles available on this platform include My Life As A Rolling Stone, Freddie Flintoff's Field of Dreams, The Hundred, Peaky Blinders, Gentleman Jack, etc.

Since most streaming services have geographic restrictions, you won't be able to see the show when you're traveling abroad. However, you may bypass any geo-blocks you encounter by using a reliable VPN. When you activate the VPN, select a UK server to watch Marriage on the BBC iPlayer easily.

Can I Watch Marriage in the US, Canada, & Australia?

Unfortunately, BBC One and BBC iPlayer are available only in the UK, and we didn't find any streaming services where you can watch the show in the US, Canada, and Australia. However, you can check out how to watch BBC iPlayer outside the UK for free.