How to Watch Gentleman Jack Season 2 Online Free From Anywhere 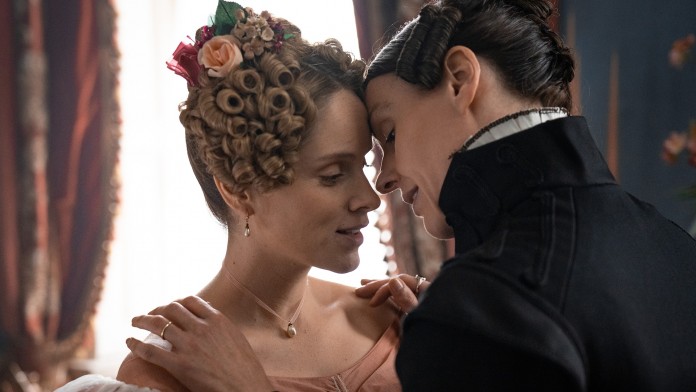 The second season of one of the most beloved series is set to premiere soon, and we will be able to watch all the episodes online. We have all the information on the release dates, plot, cast, and the number of episodes, so let's see how to watch Gentleman Jack Season 2 online from anywhere with ease.

In 1834 Yorkshire, just a month on from their private marriage ceremony, Ann Walker remains in York under the care of her doctor while Anne Lister, with fresh financial confidence and entrepreneurial vigor, renovates Shibden Hall in preparation for her wife to move in. Ann's protective tribe of relations is increasingly suspicious of Anne's motives after learning of their plan to cohabit, but they can't find the right words to express their fears about the nature of her relationship.

The plot of the first two episodes follows Anne Lister’s revelation that her new wife Ann Walker is moving in with her in Shibden shocks Ann’s relatives and leaves Anne's former lover Mariana devastated. In France, Ann Walker is shocked by details about Anne Lister’s complicated relationship with Mariana Lawton, and back in Halifax, Ann’s family is hatching a plot to marry her off.

Gentleman Jack Season 2 premieres on Sunday, April 10, 2022, with its first episode called Faith Is Alland, and we will be able to watch it online on BBC One at 9:00 PM GMT. The episode will also become available to stream on BBC's streaming platform, BBC iPlayer. Gentleman Jack Season 2 will also premiere on HBO Max internationally on Monday, April 25, 2022. The second season is expected to have eight episodes, and we will most probably get one episode per week.

How to Watch Gentleman Jack Season 2 Online From Anywhere

While it's pretty easy to watch content online in your home country, things get a little complicated when you travel because almost all streaming services have geo-restrictions in place. If you find yourself unable to access the platform or a specific title if you are traveling outside the country or even to other states, you will be able to circumvent the blockade and watch Gentleman Jack Season 2 with a VPN subscription since this tool can change your IP address.

If you don't know which tool to choose, our recommendation is to use ExpressVPN since it's one of the best tools on the market right now. It can easily unblock several streaming platforms, such as HBO Max, BBC iPlayer, Netflix, Hulu, and others with its thousands of servers all around the world. There's a no-questions-asked money-back guarantee included, so you can try ExpressVPN for 30 days RISK-FREE. What's more, it's extremely easy to use, even for beginners, and you get fast and stable connections and strong encryption to protect your data online.

You can also take advantage of the current offer if you subscribe to ExpressVPN (49% discount and 3 months FREE). All you need to do is create an account on their website, and the steps are easy and intuitive. First, fill in your details, pay, and download and install the app suited for your device or system. After that's done, open it to select a server in a location from back home and turn on the tool. Finally, access the streaming platform to watch Gentleman Jack online from anywhere when it lands.

The first episode of Season 2 will also become available to stream on BBC's streaming platform, BBC iPlayer soon after its premiere on BBC One. The good news is that you will be able to watch it for FREE on this streaming service, and you don't even need to have or create an account to do that. You will also find other famous BBC shows, such as Peaky Blinders, Eastenders, or MasterChef.

As happens with most streaming services, the BBC iPlayer platform is also geo-blocked outside the UK. This means it's only available in your home country, so you won't be able to access it when abroad. If you are traveling, you'll need to use a VPN to unblock BBC iPlayer from anywhere. Just select a server from back home and turn on the VPN before accessing the BBC iPlayer service.

How to Watch Gentleman Jack Season 2 in the US

You can also subscribe to HBO Max via subscription providers such as Apple, Google Play, and Roku. HBO Max offers native apps for iOS, and Android devices, smart TVs, gaming consoles such as PlayStation and Xbox, Roku, or Chromecast, and you can even stream content in 4K.

If you're looking for other options, a great one is the Hulu On-Demand service, where you can select HBO Max as an add-on to one of the two plans that start at $6.99 per month, and there's a generous 30-day Hulu free trial for both of the base plans. You will be able to test the ad-free HBO Max plan for 7 days before being charged the standard price of $14.99 per month.

The YouTube TV live TV and streaming service also has HBO Max as a Premium Add-On Network that you can add to your subscription. HBO Max comes with a 7-day free trial, after which the service will charge you $14.99 per month. This platform runs various deals, and the subscription price goes up to $64.99 per month and offers a free trial that ranges from two to seven days, depending on what special promotion is running at the moment.

You can also select HBO Max as a premium add-on through the DirecTV Stream live TV and streaming platform. They offer a 3-month free trial before charging you $14.99 per month for the add-on. You also get to enjoy a 5-day free trial on DirecTV Stream, and the subscription prices start at $79.99 per month.

As you may know, HBO Max is not available everywhere in the world. This means some geo-restrictions are in place and you may not be able to access this title or even the platform in some countries or territories if you're traveling away from the US. However, you can use a reliable VPN to unblock the streaming platform abroad. You need to select a server located in the US before accessing the streaming service.

How to Watch Gentleman Jack Season 2 in Canada

Bellmedia announced Gentleman Jack Season 2 will premiere in Canada on April 26, and you will be able to stream it online only on the Crave streaming service for $19.99 a month. It offers HBO Max, HBO, and also Showtime, and Starz, and you get a 7-day free trial upon creating your account with the service.

If you're traveling away from Canada, you should keep in mind that Crave is a geo-restricted platform, so it will bar your access when you travel abroad unless you use a powerful VPN. For this to work, select a Canadian server and then access the streaming service.

How to Watch Gentleman Jack Season 2 in Australia

You may already know HBO Max is not available in Australia. However, you will be able to watch this series on Foxtel's streaming platform Binge, but the premiere date here is April 26. The subscription includes a 14-day free trial for new customers and prices start from $10 per month on Binge.

You won't be able to access Binge while traveling away from Australia due to geo-restrictions. This means you will need to use a good VPN to watch this title from abroad when it lands on the platform. All you need to do is to set your VPN server to a location from back home and turn the tool on before accessing the streaming service.