FilmRise Kodi Addon: How To Install It on Kodi 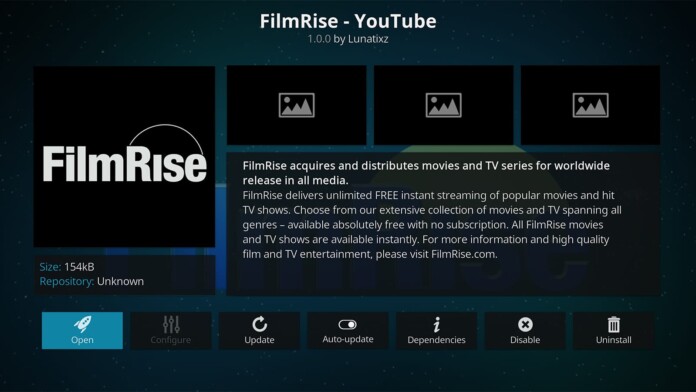 Kodi users have no shortage of capable video streaming addons - and that especially applies to free-of-charge ones. This is where FilmRise comes into play, being a distributor of numerous popular movies and TV shows. And yes, it comes with a Kodi addon, allowing you to easily expand this application's media library. So, let's talk about how to install the FilmRise Kodi addon in the simplest way possible.

First, let's give you an overview of what to expect. FilmRise brings both movies and TV shows and can be used without signing up for an account. Also, know that FilmRise comes with plenty of apps for different platforms. However, the situation is a bit different when it comes to Kodi, and here's how.

The FilmRise Kodi addon relies on the platform's YouTube channel. This is also the reason why you'll end up with two addons, including YouTube for Kodi. You'll need to go through an API key set-up procedure, so read this article very carefully. We'll make sure to explain everything you need to know.

How to Install FilmRise Addon on Kodi

And now, go through the following steps to install FilmRise on Kodi:

As mentioned earlier, you'll also end up with the YouTube Kodi addon installed. So, make sure to keep both of these installed, as YouTube is needed for FilmRise to work. And also, you can take advantage of these two addons to reach an even larger range of content.

Due to certain limitations imposed by YouTube, there's an additional step to take to make sure FilmRise works with no issues. What you need to do is generate and supply an API key. This might sound intimidating, but it's actually quite simple to do.

To check out how to create and add API keys to Kodi, make sure to click on the provided link. You'll be taken to a handy tutorial hosted on GitHub. And if you prefer to follow a video, here's a helpful YouTube tutorial.

In the end, we'd like to let you know that you can send us your feedback via the comments section below. And also, don't forget to share this article online. Thanks!