Comedy Central Kodi Addon: How To Install It on Kodi 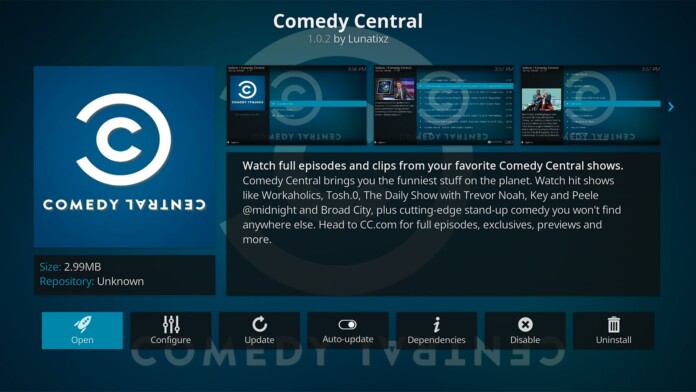 Those of you looking for funny TV shows and comedy specials already know where to find such content. Yes, we're talking about Comedy Central, which offers apps for an extensive range of platforms, including Kodi. As we're sure you're going to love what you'll find here, we are happy to point you towards the Comedy Central Kodi addon. So, here's what you need to know.

Before we tell you how to install this addon, here are a few useful bits of information on what to expect. So, know that Comedy Central is an unofficial Kodi addon, which means it’s created by an independent developer, even though it’s found in Kodi’s official repository. It scrapes its content from Comedy Central’s website, so everything found here comes free.

You can expect to find both full-length episodes and short clips. In addition, the addon's library lets you check out the latest content, browse individual TV shows, and see what's featured. And also, all of the video content found here comes in 720p.

When watching TV shows via Kodi – you HAVE TO use a VPN! That’s the only way to secure your use of Kodi while getting extra content as well. Here’s what VPNs bring:

How To Install Comedy Central Addon on Kodi

And now, here’s how to install Comedy Central on Kodi:

1. Launch Kodi and wait a few seconds until its home screen appears.

3. Pick 'Downloads' on the right, and then select 'Video Add-ons' on the left.

4. Find the Comedy Central Kodi addon and select its name.

5. You’ll now access the addon’s overview. Use the 'Install' button on the right.

6. Kodi will now show you the required dependencies. Go with 'OK.'

7. Wait for a notification telling you that Comedy Central has been installed.

8. Now, return all the way to Kodi’s home screen. Click on 'Add-ons' again.

9. Navigate to 'Video Add-ons,' where you should see the newly installed addon.

That would be all you need to know about the Comedy Central Kodi addon. If you have any questions for us, post them via the comments section below. And finally, thanks for reading!