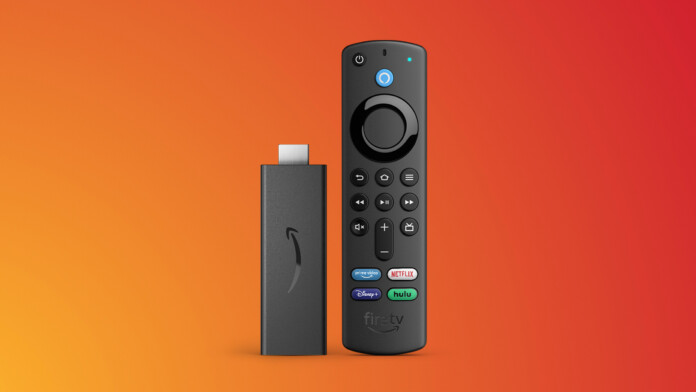 With each new year, we get more reasons to distance ourselves from traditional cable TV and satellite TV subscriptions and services. Thanks to devices such as Amazon's Fire TV Stick, it has never been easier to dive into the world of online content streaming. With that said, we wish you a warm welcome to our hands-on Fire TV Stick review!

Before we dive any deeper, know that this review focuses on the third generation of Amazon's Fire TV Stick. Even though this device was originally launched in 2021, an updated version was released in 2021 with an enhanced remote controller. In other words, this is our review of the latest available Fire TV Stick model.

If you'd like to compare this streaming service with its siblings or competitors, check the table just below. We'll begin by listing Fire TV Stick's technical specs.

Now that you know a bit about Amazon’s affordable streamer, let’s jump to its strongest and weakest points. Here are our findings, after having tested the Fire TV Stick extensively.

For in-depth information, read the rest of this review. We will be inspecting different aspects of the Amazon Fire TV Stick – so you can decide whether this is the right device for you.

As always, we will give our best to provide answers to all your questions. We’ll start by explaining the device’s hardware design, how to set it up, and then explain what else to expect. Let’s jump right in, shall we?

Small and inconspicuous, Fire TV Stick is incredibly simple. It looks like a USB dongle designed to be plugged into your TV. Simple but efficient. Our Score: 10/10.

There is nothing about Fire TV Stick’s design that screams 'high tech.' Still, it’s quite impressive what this incredibly small device can do. It looks like a regular USB stick, following the pattern set by its predecessors. Since it’s designed to be placed on your TV's backside, you really don't have to be concerned about its looks.

Once you have it in your hands, you will see there’s an HDMI connector on one side. You'll also find a USB port that provides the needed power to this device. And that’s pretty much it. The device is made of plastic and might creak a bit if squeezed hard. However, we're sure you’ll get to use your Fire TV Stick for a very long time.

Getting started with the Fire TV Stick is quite easy. However, you'll need to test your patience as the initial setup takes a while to complete. Our Score: 8/10.

Since the Amazon Fire TV Stick comes with an HDMI connector, you’ll need a free HDMI port on your TV. Most of today's TVs have at least two ports of this kind, so the chances are that you won’t have to disconnect any other devices.

With that said, the first step is to plug the Fire TV Stick into an HDMI port. However, keep in mind that you'll also receive an HDMI extender in the box, which can be used to optimize the device's reception of your Wi-Fi signal. Still, in most cases, you should be fine with simply plugging the media streaming device into your TV.

Amazon's Fire TV Stick is a media streaming device - which means that it 100% relies on your Web connection. Therefore, having a stable Web connection is crucial for this type of device. If your Wi-Fi signal is weak or if you have an unstable wireless connection, our strong recommendation is to use Amazon's Ethernet Adapter for Fire TV Devices ($14.99).

Next, you need to provide a power source. You need to use a USB cable to connect the Fire TV Stick to your TV for that purpose. Alternatively, you'll receive a power adapter that lets you connect the device to a wall outlet.

Once you power on the device, you'll need to go through its one-time set-up before you reach your Fire TV Stick's home screen. During the initial setup, you'll be asked to pair the remote controller, update the device's software, sign in using your Amazon account, and more. So, make sure to closely follow the instructions you'll see on your TV screen.

Fire OS has just received a brand-new interface, which is a joy to use on the latest Fire TV Stick. However, one thing remains the same - and that would be Amazon's overly aggressive effort to advertise its own content. Our Score: 8/10.

The 3rd-Gen Amazon Fire TV Stick was the first device to have received an all-new Fire TV experience, which is now rolling out to other Amazon-made streaming devices. This is a major redesign of Fire OS, trying to simplify how Fire TV devices work while also putting all of its focus on letting you discover new content and apps.

The latest version of Fire OS comes with a new main menu, now taking the central portion of your TV's screen. Using it, you can access tabs like 'Home,' 'Find,' and 'Live.' And if you scroll to the right, you'll get to your favorite media streaming apps, letting you preview their content without actually having to open any of those apps.

Another interesting addition is the ability to create profiles. More precisely, you can create up to six profiles that come with personalized recommendations, viewing history, preferred settings, and more. And lastly, Amazon has also introduced 'Kids Profiles,' restricting access to family-friendly content only. However, that feature is available in the United States only.

In case you'd like to take a deeper into the latest Fire OS, we recommend checking out this Amazon blog post. You'll find links there that explore Fire OS's technical capabilities and new user experienced in-depth, letting you learn how to take full advantage of your Fire TV Stick.

Overall, we'll end this segment of your Fire TV Stick review by praising Fire OS' new interface. Still, we have to note that Amazon is still quite aggressive in the way it advertises its own services. If you're not a subscriber to Prime Video and related services, expect to see a lot of ads trying to convert you.

The Fire TV Stick is controlled by the Alexa Voice Remote, which can control your TV as well. This is a very complex remote, with over 15 buttons, but somehow - it feels very intuitive and easy to use. Our Score: 9/10.

As mentioned earlier, this review focuses on the 2021 edition of the 3rd-gen Fire TV Stick. In many ways, this is the same device as the one released in 2020. However, the biggest change here is the next iteration of the Alexa Voice Remote.

In general, the size and weight of the Alexa Voice Remote have remained the same. However, there are subtle changes throughout. For example, the 'Microphone' button has been replaced with the 'Alexa Voice Button,' which now comes in blue. And then, there are four 'Preset App Buttons,' which act as shortcuts to Prime Video, Netflix, Disney Plus, and Hulu.

Aside from that, the Alexa Voice Remote comes with comprehensive controls that let you interact with Fire OS and your content. One could argue that the latest version of Amazon's Alexa-powered remote is overly complex, as it comes with 15+ buttons. However, once you start using it, you'll see that each button has its purpose. The remote is intuitively designed, and you'll get to use it without having to look at it all the time.

Lastly, we'd like to mention that the Fire TV Stick 2021 comes with the Alexa Voice Remote that can control your TV, soundbar, and other devices. This feature doesn't work on all TVs but should work with the overwhelming majority.

A huge ecosystem of first- and third-party apps await. Even if you’re not a Prime member, you can count on an endless media streaming library. Our Score: 10/10.

In case you didn't know, the Amazon Fire TV Stick is powered by a customized version of Android TV (called Fire OS). As you can already imagine, that is an indication that you can count on thousands of Android apps. However, there’s one important caveat. Instead of Google’s Play Store, you download apps from Amazon’s App Store. These two are not identical, but they share many similarities.

It’s important to understand that you don’t need to be a Prime member to use this device. You can count on apps like Netflix, Disney Plus, Hulu, HBO Max, Discovery Plus, and more. That means watching on-demand video content and live TV channels is entirely possible. You just have to download the appropriate app, sign in, and you’re ready to go.

If you plan on accessing streaming apps on your Fire TV not typically available in your country, you'll need to use a VPN. With that said, here's how to install a VPN on any Fire TV device.

Aside from media streaming-related apps, there are apps like Firefox, YouTube, and Reddit. This means you can expand Fire TV Stick’s functionality in any way you want. And lastly, you can count on Amazon’s range of apps – many of which are designed specifically for Prime members, letting you watch on-demand content and live TV, stream music, and more.

The latest Amazon Fire TV Stick is equipped with a new processor. That translates to incredibly fluid performance and short buffering periods. Our Score: 9.5/10.

The latest Fire TV Stick generation brings a quad-core processor – and you can actually feel that power. Moving through menus and opening all kinds of screens happens in an instant. The same goes for using applications. This isn’t just a small upgrade – users of older models will actually feel this performance jump.

Buffering is incredibly fast as well. In general, you will see a low-resolution image for up to 2 or 3 seconds until the HD resolution kicks in. Of course, if you have a very fast Internet connection, you won't encounter any buffering.

When it comes to Alexa-powered voice commands, they usually work quite well. You need to press the 'Alexa Voice Button' on the remote, hold it, and speak your commands. Overall, Alexa manages to find reliable results. However, you’ll often see unrelated results as well. This might be Amazon’s effort to showcase other types of content as well.

Before we wrap up our Fire TV Stick review, we'd like to answer a pressing question. Since many of you wonder which Fire TV Stick device to pick (they all look the same, after all), know that TechNadu is here to help you decide just that. Take a look below.

So, who should buy the 3rd-gen Fire TV Stick? Well, since this device is limited to 'Full HD' (1080p) streaming, those who don't have a 4K TV should get this media streaming device. For $39.99, you get HD streaming along with the Alexa Voice Remote, which can control your TV, soundbar, and other devices.

Still, if you're on a budget, you should consider getting Fire TV Stick's less powerful sibling, the Fire TV Stick Lite. That device comes priced at $29.99 and also has 'Full HD' streaming. The only thing missing here is the Alexa Voice Remote. Instead, you'll get a less powerful remote that cannot control devices other than the streaming device itself.

Finally, we'll conclude our Fire TV Stick review with a quick look at the device's pros and cons. So, here's what we think about the Fire TV Stick after having reviewed it hands-on.

Do We Recommend Buying the Fire TV Stick?

With that said, we believe that the 'standard' Fire TV Stick still deserves to be recommended. For $39.99, it offers plenty of value overall. If you want a reliable media streaming device limited to 'Full HD' and with the ability to control your TV as well, you won't make a mistake if you purchase the latest Fire TV Stick.

That would be all for our Fire TV Stick (3rd-gen) review. If you have any questions for us, let us know via the comments section below. And finally, thanks for reading!