How to Watch NFL Games Without Cable in 2021 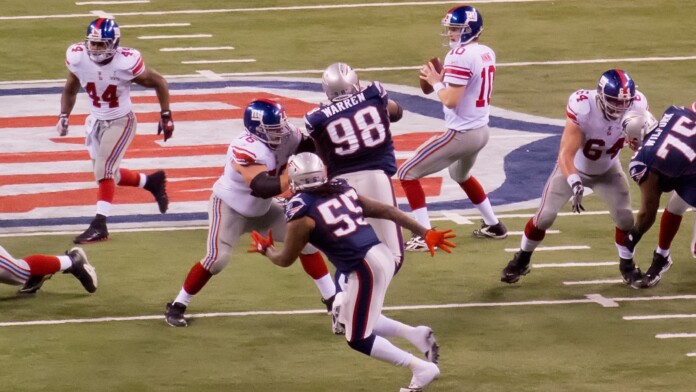 The NFL season is kicking off, and we can hardly contain our excitement. And if you are like us, you will no doubt be licking your lips at the prospect of watching your favorite teams in non-stop exciting action over the course of the next five months. American football is part and parcel of the American culture, and the NFL has millions of fans in the United States. And its popularity is now such that people from all over the world are falling in love with this sport.

The National Football League was created all the way back in 1920, meaning that the league is more than 100 years now. It has grown and grown over the years, and now it features 32 teams with the possibility of more teams joining the league in the future. These 32 teams are currently divided between the National Football Conference (NFC) and the American Football Conference (AFC). Postseason then follows the regular season, with the top teams battling it out to reach the Super Bowl. And the two finalists compete in the Super Bowl, with the winner declared NFL champions.

The NFL schedule is pretty lengthy, with every team having to play 16 games each. The season has already gotten underway, and we have been treated to some very exciting matches already. For more information on the NFL schedule, be sure to check out all the information here.

NFL games are streamed and broadcast on a number of channels across the United States. The league has television contracts with a total of five networks: ABC, CBS, ESPN, Fox, and NBC. And these networks pick and choose the games that they want to broadcast, with the rest being broadcast on local channels.

How to Watch the NFL Online From Anywhere?

If you do not live in the United States or are traveling away from the country, you will not be able to watch matches on these channels as they will be geo-blocked.

But worry not, because we have you covered – there is a very easy solution to this problem. All you need to do is get an active VPN subscription, which will allow you to bypass the geo-blocked stream or channel and watch all the NFL action live. It will set the United States as your virtual location and make it seem that you are actually watching the games live from the US.

We recommend using ExpressVPN, which is easily one of the fastest and most popular VPN services in the world. It has a wide variety of location options for you to choose from, and it is also easy to use. All you have to do in order to get an ExpressVPN subscription is visit the website, fill out all the required details and then pay the subscription fee before you can download the app. Then, set the United States as your location, and you will be able to watch all the NFL matches live on your desired devices using the streaming service of your choice.

When you subscribe to ExpressVPN (49% OFF), you get a 30-day money-back guarantee. If you would like to take a look at some of the other available VPN services in the market, be sure to read our reviews of the best VPN services.

How to Watch NFL in the US Without Cable?

These days there are so many available alternatives that you no longer need a cable subscription to watch your favorite sporting events live. Gone are the days of a hundred different wires sticking out of your television and missing the action because you are outside. Now you can watch all the action on the go and from your favorite devices by choosing from a variety of different streaming services. These streaming services have many available channels that will allow you to watch your favorite NFL stars in action live.

First, on our list of streaming services, we have a popular platform to watch live sports on – fuboTV. It is easy to use and has gained a lot of popularity in recent years, with users especially loving its customization options, among many other things. It has three main bundles: Starter, Pro, and Elite. The Starter bundle is the cheapest one, and it costs $64.99 per month. The Pro bundle has a subscription fee of $69.99 per month, and the Elite bundle costs $79.99 per month.

ABC, CBS, Fox, NBC, and ESPN are all available on fuboTV, as are the NFL Network and the NFL RedZone (available as an add-on option for $11 per month). For more information on this streaming service, read our review here for fuboTV.

Next up, we have Sling TV, which comes with many customization options, making it a great choice. It is also comparatively cheaper than the other options on this list, and it offers the opportunity to watch most of the NFL games live.

If you are looking for another alternative, you can find one with the increasingly popular Hulu + Live TV. It has just one pack that includes 75+ channels, and the subscription is $64.99 monthly. You will easily be able to watch the NFL live, as it has ABC, CBS, Fox, NBC, and ESPN on its list of available channels. It also has the NFL Network as part of its channel options.

Plus, you will also get access to Hulu’s original movies, TV shows, and all the other content on its On-Demand library. So with this service, you get two platforms in one. Before making your decision, read our Hulu Live TV review here to get more information on the service.

Last but not least on our list is YouTube TV, which contains a large number of premium channels. It has only one bundle but does offer dozens of Premium channels delivered in high definition. Among the 85+ channels on offer, you will find ABC, CBS, Fox, NBC, and ESPN, so you can watch the NFL live with ease. Like Hulu + Live TV, a subscription to YouTube TV costs $64.99 per month. For more information, read our YouTube TV review here.

Which Teams Take Part in the NFL?

A total of 32 teams take part in the NFL each year, and the season is played over an 18-week schedule. Each team needs to play 17 games each before 6 teams from each conference advance to the playoffs. The team with the most titles is still the Green Bay Packers, who have won the title a whopping 13 times, while the Tampa Bay Buccaneers are the defending champions, having won their second championship last season with their win over the Kansas City Chiefs.

The Chiefs and the Buccaneers are among the clear favorites to reach the Super Bowl once again this season. With Patrick Mahomes and Tom Brady leading the way, the two teams will renew their rivalry. And it will be exciting to see if they manage to meet once again in what would be a repeat of last season’s final.

Among the other teams looking to contend with the two favorites will be the Los Angeles Rams, the Cleveland Browns, the Arizona Cardinals, the Buffalo Bills, and the San Francisco 49ers. Also in the race will be the Seattle Seahawks and the Baltimore Ravens, while the New England Patriots can never be disregarded with Bill Belichick at the helm. Another team to watch will be the Miami Dolphins.

Some of the biggest names in the world of NFL are superstars Patrick Mahomes and Tom Brady, Aaron Rodgers, Lamar Jackson, Russell Wilson, Dak Prescott, and several others.