How to Watch NBA Without Cable: Live Stream Basketball Anywhere 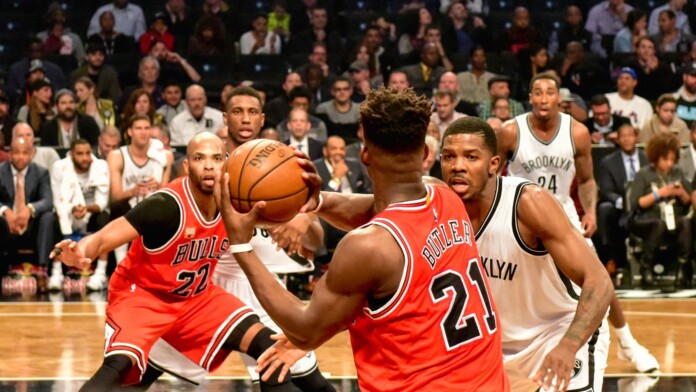 The 2021-2022 NBA season is nearing its start, and the excitement is through the roof, especially for the finals that follow the regular season. This season will be the 76th edition of the NBA, and it promises one of the best ones yet.

The new season will get underway on October 19, and it is supposed to wrap up by April 10, with the Playoffs scheduled to take place between April 16 and May 30. The NBA will return to a full 82-game regular season this time around after the last two seasons were interrupted and shortened due to the COVID-19 pandemic. Multiple games had to be postponed or had dates changed due to players getting the virus or getting quarantined after having contact with an infected over the last two years.

But with things now slowly getting back to normal, the NBA is set to have a full season. So fans can look forward to what should be a very hotly contested season, with teams battling it out to reach the NBA Finals. This is also the 75th anniversary season, and the NBA will commemorate that over the course of the year. That will make it an even more exciting watch for the fans.

So here we take a look at where and how you can watch all the NBA action this season from anywhere in the world without cable.

The 2021-22 NBA season will be kicking off on October 19, 2021, when the defending champions Milwaukee Bucks will renew their rivalry against the Brooklyn Nets. Also in action on the opening night will be the 2020 champions Los Angeles Lakers and the Golden State Warriors. Games will continue pretty much every day on the following days, and every team will play a total of 82 games.

You can also get a detailed schedule of the games from the official NBA page, where you can also see what games are on and where to watch them, as well as the exact times to tune in. Matches for all 30 teams that take part in the NBA will be listed there.

How to Watch NBA Online From Anywhere?

The broadcasting rights for the 2021/22 NBA season are once again split between multiple networks, as we still have a few more years before the current contracts expire. That being said, you can watch the NBA games on ABC, ESPN, TNT, and NBA TV.

If you're going to travel abroad for any reason or are living somewhere other than the United States, your usual ways of watching NBA games online will not work because live TV services in the US are geo-blocked. To bypass this issue and watch the content, you will need to have an active VPN subscription. VPNs can route your Internet connection through a US server of your choice and assign a new IP address to your device, so the platforms you're accessing will think you're in this new location.

We recommend using ExpressVPN, which is easily one of the best tools we have ever tested, with thousands of servers everywhere in the world and some great privacy features. It also works with almost every streaming service, making it a very reliable tool compared to some of the other VPNs.

To subscribe to ExpressVPN (49% OFF), go to the tool's website, fill out all the required details, pay the subscription fee, and download the app for your devices. You also get an amazing 30-day money-back guarantee, making ExpressVPN a great bang for the buck. If you want to look at alternatives, here you can take a look at some of our best VPN services available at the moment.

How to Watch NBA Games Without Cable in the US?

You can watch the NBA games on the mentioned major networks (ABC, ESPN, TNT, and NBA TV), but since none of them will broadcast all the games, you will need to have access to all the channels to watch NBA live. This means you should subscribe to one of the many available streaming services that include all these networks. Here we have some streaming services that will allow you to watch the NBA live without cable.

First up on our list of options when it comes to streaming services is fuboTV. It is an excellent sports-oriented service that will allow you to watch your favorite NBA matches and all other sporting events live on your favorite devices. It has three available bundles: Starter, Pro, and Elite, which cost $64.99 per month, $69.99 per month, $79.99 per month, respectively.

You will be able to find ABC and ESPN in all three of its bundles. Unfortunately, fuboTV does not have TNT, but you can get NBA TV with the "fubo Extra" add-on, which costs $7.99 per month. For more information, you can read our fuboTV review.

Next, we have another prominent service - Sling TV has several cool customization options and quite a few channel packs. It has three available bundles, namely Orange, Blue, and Orange + Blue. The first two cost $35 per month and the last one costs $50 per month.

ESPN and TNT are both available on Orange and Orange + Blue packs. However, Sling TV does not have ABC on its list. NBA TV is on the "Sports Extra" add-on, which costs $15 per month. For more details on the streaming service, be sure to read our Sling TV review.

You can also watch the NBA matches live on Hulu + Live TV. It has all three channels that you need - ABC, TNT, and ESPN in a single bundle that has more than 60 channels. The subscription costs $64.99 per month, and you get access to the Live TV and On-Demand services.

Here is our review for Hulu + Live TV if you want more details on the service.

Another option to try is YouTube TV, which has 85+ premium channels as part of its pack. It has ABC, ESPN, NBA TV, and TNT so you can watch all NBA games live.

A monthly subscription costs $64.99 and has a few interesting perks included with the price. Here is our YouTube TV review.

You can also watch select NBA games live on the NBA League Pass. It will only broadcast the games that aren't shown on live local or national TV channels, and it costs $199.99. You will also be able to watch classic and archived games, live audio for all games, access to highlights, and a lot more.

If you are planning to watch out-of-market NBA games then you must read our guide on how to bypass NBA League Pass Blackout Restrictions to watch games from anywhere in the US.

Once again, 30 teams will compete in the NBA, looking to reach the playoffs and play in the Finals. Defending champions Milwaukee Bucks will be aiming to retain their crown. But with so many teams in the mix, it certainly won't be easy for them. Among the other favorites include the Los Angeles Lakers, who won the NBA championship in 2020. Last year's finalists, Phoenix Suns, will be looking to go one better this time around. Also in contention will be the Brooklyn Nets.

There are also several teams who have improved their rosters on the back of a disappointing showing last season. Among those teams are the Miami Heat and the Philadelphia 76ers. We could also see some exciting teams on the up, including the Dallas Mavericks, Denver Nuggets, and Utah Jazz. The New York Knicks, the Atlanta Hawks, and the Golden State Warriors will also be looking to compete and could be the dark horses this season. Chicago Bulls could also come into playoffs contention, as could the Boston Celtics and the Portland Trail Blazers.

Some of the biggest players in the world of basketball will play in the NBA this season, as is always the case. Giannis Antetokounmpo led the Bucks to the NBA title last season, and he will be hungry to regain his NBA MVP award this year. Among the other big names who will be fighting for the MVP award will be Stephen Curry, LeBron James, Kevin Durant, Luka Doncic, Devin Booker, Trae Young, and several others. Jimmy Butler, Nikola Jokic, Anthony Davis, Donovan Mitchell, and James Harden could also be set for big seasons. There are several other talented and world-class players in the NBA who will compete night in, night out for the entertainment of the fans, with all of them having the goal of reaching the NBA finals.

This is a very exciting time in the NBA, with so much going on in the league. There is a great mix of players, old and new, who will be looking to make their mark. There are also so many teams in the contention that the race for the playoffs will be a very exciting and close one. And with the play-in format back this year, the playoffs race could well go down the wire. So be sure not to miss any of the games because the NBA is set for a thrilling season.