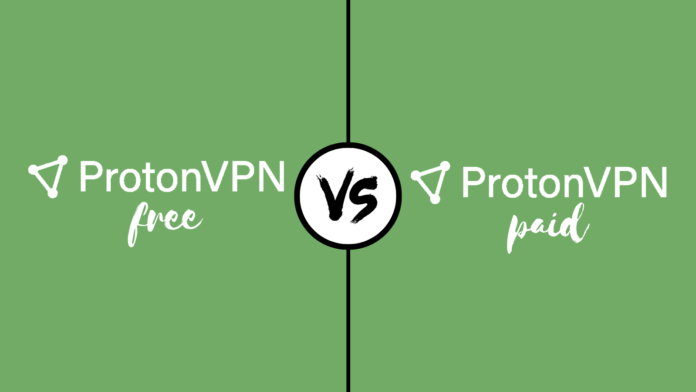 If you check our hands-on ProtonVPN review, you’ll see that we had plenty of positive things to say about this capable VPN service. And since you’re reading this article, you already know that ProtonVPN offers both free and paid versions. Naturally, this raises the question of whether it’s worth paying for this VPN? With that said, we wish you a warm welcome to our ProtonVPN free vs. paid comparison!

If you'd like to dive deeper into understanding the differences between ProtonVPN's free and paid plans, make sure to keep reading this article.

Our ProtonVPN free vs. paid comparison dives deep into individual aspects of this VPN service. That will help you understand what you'll get for free and what if you pay. Check the following table of contents to see what we'll talk about.

First, let's check the differences between ProtonVPN's free and paid plans regarding the platforms and devices they support and the number of simultaneous connections they offer.

SUMMARY: The most limiting difference here is in the number of simultaneous connections. With ProtonVPN’s free plan, you get only 1 connection, while paid plans support up to 10. So, if you plan on using ProtonVPN on more than a single device, the free plan won’t meet your needs.

Next, let's look at the basic and more advanced features that ProtonVPN provides to its free and paid subscribers. Check the following table for a quick comparison.

SUMMARY: At least on paper, it looks like ProtonVPN offers the same features via its free and paid plans. And yes, both of those can keep you safe online. The main difference is that you get access to more advanced tools to take your privacy protection to another level with paid plans.

Managing a vast network of servers comes at a cost, which is why free VPNs typically limit your access to their server network. That’s the case with ProtonVPN as well, as you can see below.

SUMMARY: This is one of the most drastic segments of our ProtonVPN free vs. paid comparison. Unless you decide to get one of ProtonVPN’s paid plans, you’ll get to deal only with a small group of typically overcrowded servers.

One of the main characteristics of free VPNs is their bandwidth/speed limitation. They’re forced to impose those limits to cut their costs and preserve their servers’ performance.

SUMMARY: While ProtonVPN's free plan is sufficient for regular Web browsing (and other non-intensive activities), your possibilities are endless with ProtonVPN's paid plans. The only limitation you'll encounter will be the speed limit of your Web connection.

If you're looking for a free VPN to streaming online media and download torrents, you'll want to read this segment carefully. Here's what you need to know.

SUMMARY: If you want to access media streaming sites not available in your country, your only option would be ProtonVPN’s Plus plan. Sadly, media streaming and torrenting are not supported on the free plan, which can only unblock a range of “standard” websites.

Of course, even if you don’t pay for a VPN, you’re still entitled to its customer support. With that said, we’ve made sure to include the customer support segment in our ProtonVPN free vs. paid comparison.

SUMMARY: In general, both free and paid ProtonVPN subscribers have access to ample resources at their disposal. So, no matter if you're an experienced VPN user or beginner, you should have no problem using this VPN, even if you encounter a technical issue.

Finally, we come to the most differentiating factor when comparing ProtonVPN’s free and paid plans. And yes, we’re talking about their pricing. Here’s what you need to know.

SUMMARY: ProtonVPN's free plan is quite honest and straightforward, without any fine print. However, if you decide to pay for the VPN, you can choose from a whole range of plans whose prices go down if you pick a long-term plan.

In The End – Who Should Use ProtonVPN’s Free Plan? Should You Pay Instead?

Based on everything said so far in our ProtonVPN free vs. paid comparison, the conclusion is clear. This VPN offers one of the best free-of-charge subscriptions out there. However, it's suitable enough only for basic Web browsing and if you don't care about downloading large files, streaming online media, gaming, or torrenting.

In other words, if you needs are very basic, ProtonVPN's free plan will meet all of them. Still, we also think it's worth paying for ProtonVPN, as it brings a complete solution to protecting your privacy at affordable pricing ranges. To learn more, head over to ProtonVPN's website.

That would be all for our ProtonVPN free vs. paid comparison. If you have any questions for us, make sure to post them just below. And finally, thank you for reading!