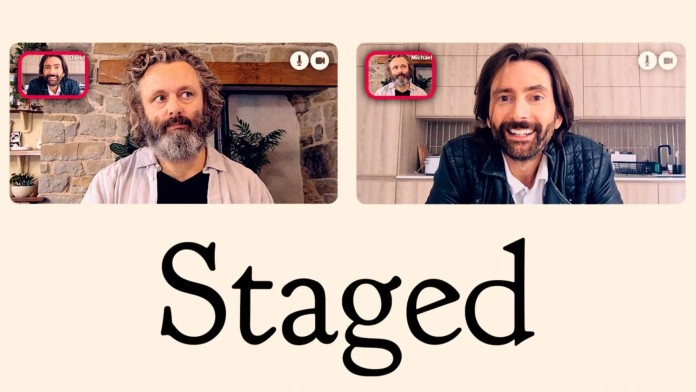 Fans of the award-winning show will be happy to know that a brand new season of the lockdown endeavor has been announced, and we will be able to stream all the episodes online easily.

Staged made its premiere in 2020 during the height of the COVID-19 pandemic, in which actors David Tennant and Michael Sheen played fictionalized versions of themselves while attempting to rehearse a play over Zoom calls while under lockdown. A second season followed, along with a behind-the-scenes special which explores the making of the show and includes errors and outtakes.

In Staged Season 3, we will see that for David and Michael, life is back to normal. While Simon's career is still in a state of stagnation, they have pushed through the lockdown and are back to their regular working lives. The only time Simon's phone rings is when people urge him to help David and Michael get back together. But as Christmas draws near, Simon is hopeful that the joy of the occasion would make them more receptive to the idea of hearing a radio adaptation of a Christmas classic.

If you can't wait to watch the new season and wondering how to stream it online, we've got your back! Keep reading to find out where, when, and how to watch Staged Season 3 online from anywhere you may be.

When and Where to Watch Staged Season 3

Staged Season 3 will premiere on BritBox UK on November 24, 2022, in the UK. The third series will have 6 episodes. The show has left the BBC and will debut on BritBox UK with the first two seasons and a series special.

How to Watch Staged Season 3 Online From Anywhere

Movies and TV shows are now easier to watch online than ever before; the only requirement is that you are in your home country and have access to a service that provides the content. So if you're in the UK, you can easily watch the series on BritBox UK. But if you travel abroad, you won't be able to access the platform since it is geo-restricted. In that case, you can use a VPN to watch Staged Season 3 online, and it will alter your IP address to make it appear as though you are at home.

Looking for a suitable VPN solution? We recommend ExpressVPN because it can effectively unblock most streaming sites like Peacock, Hulu, Netflix, and more and has thousands of servers worldwide. It is one of the best VPNs on the market, with unlimited bandwidth, 24/7 live chat support, and using top-notch encryption algorithms, it also defends you from security lapses and safeguards your online privacy. Thanks to the tool's no-questions-asked money-back guarantee, you can try ExpressVPN for 30 days RISK-FREE.

You may get a nice deal and save money if you go to its website and subscribe to ExpressVPN (49% Discount + 3 Months FREE). You can log in using an activation code or a sign-in link supplied to your email address after downloading the native app for your device. To watch Staged Season 3 online from any location, activate the VPN and select a server in your country of residence, and then access a streaming service.

How to Watch Staged Season 3 in the UK

As mentioned before, Staged Season 3 will premiere in the United Kingdom on BritBox UK. You can purchase a monthly subscription to the service for £5.99 after a 7-day free trial.

You can watch a variety of British films and TV shows on this platform, including the latest BritBox Originals. And we should also mention that you can also add BritBox on Amazon Prime Video for £5.99 per month after a 7-day free trial. On the other hand, a Prime subscription costs £8.99 per month and comes with a generous 30-day free trial. Please note that Amazon Prime is required to get BritBox on Prime Video.

Furthermore,you can watch season two of the show on ITVX for £5.99 per month or £59.99 per year after a 7-day free trial (Premium subscription).

While visiting another country, you may watch Staged Season 3 using a reliable VPN. This tool will remove all geo-restrictions you may face; pick a UK server when you activate the VPN.

How to Watch Staged Season 3 in Canada

As you may know, most streaming services are geo-restricted, so if you travel abroad, you won't be able to access Hollywood Suite via Prime Video. However, this problem can be solved using a secure VPN - just pick a Canadian server when you turn on the VPN, and you're all set.

How to Watch Staged Season 3 in Australia

If you're in Australia, you can watch seasons one and two on BritBox, and one season on Stan. A release date for Australia hasn't been announced yet, but you can keep an eye out on these platforms for the latest installment of the series to land in the future.

By removing geo-restrictions, a dependable VPN will help you to watch Staged Season 3 while visiting another country. When you activate the VPN, just select an Australian server, and you're ready to go.

Can You Watch Staged Season 3 in the US?

Unfortunately, we didn't find a network or service that offers the title in the US, so you might not be able to watch it directly. However, you can always use a fast VPN to watch Staged Season 3 in the US. All you need to do is pick a UK server when you turn on the VPN and then access BritBox UK to watch the series when it airs.