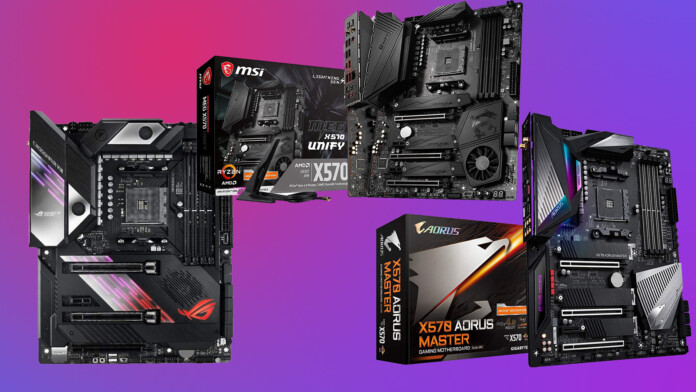 The Ryzen 9 5900X from AMD is the company’s second most powerful chip of this generation, with only the 5950X being above it in terms of raw performance. In addition to the blazing fast single-core capabilities, the CPU also comes with 12 physical cores and 24 threads, which makes it a beast in multi-threaded applications as well.

Keep in mind that this processor is marketed as a gaming solution first and foremost, especially since AMD relies on its Threadripper line-up when it comes to productivity. You can definitely get a lot of work done on one of these, but everything about it is designed to push and maximize game FPS.

As such, here are some of the best motherboards for the Ryzen 9 5900X that you can currently buy:

Features: The Crosshair VIII Formula from Asus is what you get when money is not an issue and no corners are cut in terms of features. The entire board is hidden under heavy-duty heat sinks and RGB, and the rear I/O has more ports than you can count. There’s even an OLED screen on it that can be customized with a personalized GIF animation.

The power delivery is as high-end as it gets as well, with only the best electrical components when it comes to the VRM. RAM speeds depend on the CPU architecture, but for the Ryzen 5000 series you can expect frequencies that exceed 5100MHz. The VRM is also designed with water cooling in mind, if that’s your thing.

Surprisingly, there are only two M.2 slots available, which is not something you would expect on such an expensive motherboard. The upside is that you get eight SATA ports instead, none of which are disabled if you decide to use both M.2 slots at the same time.

Connectivity: As mentioned before, the board is a monster in terms of I/O. There are two Ethernet ports you can use, one of which is a 5Gbit version. There are also a plethora of USB ports, including both generations of version 3.2.

The input jacks for audio are gold plated for better conductivity, and there’s also an optical S/PDIF output for specialized devices. Obviously, both Wi-Fi and Bluetooth modules are included as well.

Performance: There’s nothing stopping you from pushing your CPU to the limit with this motherboard. The top-of-the-line VRM can handle pretty much any high-end AMD CPU, including the Ryzen 9 5900X.

The same can be said about memory. There are not many memory kits out there that run at the frequencies supported by this motherboard, so it’s difficult to complain about performance in this regard.

Features: The AORUS Master from Gigabyte is the company’s flagship in terms of motherboard design. The board is stacked with all manner of ports, slots, and heat sinks to protect vital components from overheating.

As you can expect, a great deal of work went into the power delivery and voltage control for the CPU. You can squeeze every bit of performance out of any Ryzen processor, especially if you have the necessary cooling to keep the chip from overheating.

There are also plenty of PCI-Express and M.2 slots, the latter of which are also protected by metal heat sinks. In short, you can load the board with as many high-performance parts as you wish without running into any bottlenecks.

Connectivity: If you take a look at the rear I/O, you can find pretty much everything you would need to connect your peripherals. There are no USB 3.2 ports, however, which may be a bit of a bummer if you are in the market for those.

On the other hand, you can make use of the two separate Ethernet ports, one of which can support speeds of up to 2.5Gbits. The audio ports are also gold-plated, complete with an optical output.

Lastly, Bluetooth and Wi-Fi modules are included as well, as we’ve come to expect from most X570 boards. There are also two BIOS-related buttons for easy access, which means that you don’t have to fiddle with jumpers in order to clear your CMOS.

Performance: Again, there’s hardly any hardware out there that cannot be pushed to its limits when plugged into the AORUS Master. The RAM speeds go all the way up to 4400MHz, and you also get three separate PCI-Express slots. Only one of them is Gen 4.0 and capable of x16 throughput, however, but that’s pretty much always the case anyway.

In terms of storage performance, the board offers three M.2 slots, all of which can be populated with NVME drives. You can also set up RAID arrays using these slots.

Features: The Meg Unify is MSI’s response in terms of high-end motherboards based on the x570 chipset. The first and most obvious feature is the VRM, which is designed to keep your CPU operating smoothly even at the highest OC your cooling solution can handle.

But there are other neat features to consider as well. For starters, you can fit up to three M.2 NVME drives on it, while also having access to three PCI-Express x16 slots, one of which is Gen 4.0. The supported RAM frequencies go past 5000MHz as well.

Connectivity: Given the somewhat forbidding sticker price, the rear I/O can be a bit disappointing for some people, at least in regards to USB ports. There are two USB 2.0 ports, two USB 3.2 Gen 1 ports, and four USB 3.2 Gen 2 ports, one of which is Type-C.

There’s also only one Ethernet port, although at least it’s a 2.5Gbit one. Bluetooth and Wi-Fi modules are available, and there’s even a PS/2 port that can be used for either a mouse or a keyboard. Buttons for BIOS flashing and CMOS clearing are present as well, which is definitely a nice touch.

Performance: Even if the motherboard lacks some clout in the connectivity department, that’s not the case in terms of performance. You should be able to get all the benefits that come along with a Zen 3 CPU like the Ryzen 9 5900X, and even a bit of extra juice if you are an overclocking enthusiast.

PCI-Express Gen 4 is available for the primary GPU slot and the M.2 slots, which is bound to become the norm in a couple of years. RAM speeds are also phenomenal, at least if you can find a kit that can be pushed that high without running into stability issues.

Features: This board from Asus is specifically designed for people who want to build small-form gaming PCs in order to save space. As such, this is a Mini ITX motherboard with a width and height of under seven inches.

On top of that, the whole point of paying this much money for such a small board is that you do not have to sacrifice performance, or even connectivity. The VRM design is still incredibly efficient, which means that you can also do some overclocking if that’s your thing.

There are also some drawbacks to take into considerations, such as the fact that you only have two RAM DIMMs to work with and a single PCI-Express slot. You can also fit a single M.2 drive in tere, although it does have a double heat sink on top.

Connectivity: Despite its small size, the connectivity is actually not an issue on the X570-I. You even get both DisplayPort and HDMI outputs, as useless as they may be for a 5900X owner. The USB setup is pretty accommodating as well, with both Gen 1 and Gen 2 ports for the USB 3.2 standard, plus a Type-C.

Unfortunately, the only Ethernet port available on the board is a basic 1Gbit one, which is a bit of a bummer nowadays. The onboard audio is also limited to 3 jacks, and there is no optical output either.

Thankfully, at least you get both Bluetooth and Wi-Fi support, which is definitely a great addition to a Mini ITX board. There are no CMOS or BIOS flashback buttons, but there are all sorts of RGB headers spread all over the board.

Performance: In essence, there are no major downsides in terms of CPU power delivery, which is a good thing. You should be able to take full advantage of your 5900X, even if the board itself is very small. However, there are some things you need to live without.

The first one is the fact that you only get two RAM DIMMs, as well as a total memory capacity of 64GB instead of the usual 128GB found on most 4-DIMM motherboards. In addition, you also get a single PCI-Express slot, so there’s nothing else you can add besides a GPU.

Lastly, the single M.2 slot can be a bit of an issue as well, especially since your only other options are the two SATA 3 ports. On the other hand, these are the kind of drawbacks you need to expect from a tiny motherboard.

Features: You don’t have to spend a lot of money in order to get a good X570 motherboard, especially if you are not interested in RGB lighting and other fancy features. The X570-PRO from Gigabyte has everything you need in terms of power delivery and performance, while leaving out some of the extras.

While you do get two PCI-Express x16 slots, only one of them is reinforced to prevent GPU sagging, which is frankly not an issue unless you are considering a dual-GPU solution. There are also two M.2 slots, one of which even has a heat sink cover to prevent overheating.

Connectivity: Things are not too bad in terms of connectivity either, especially on the rear I/O. Granted, the number of USB ports is a bit limited, but there are both USB 3.2 Gen 1 and Gen 2 ports, plus an extra Type-C port.

On top of that, there’s also a 2.5Gbit Ethernet port, which is frankly a steal at this price point. You even get a BIOS flashback button, as well as the customary five audio jacks + a S/PDIF optical output. Bluetooth and Wi-Fi modules are available too.

Performance: As mentioned before, the motherboard does not limit you in any way when it comes to pure performance. Your Ryzen 5900X can easily spread its wings and do its job without issues, especially since you can even do a bit of overclocking.

The supported RAM frequencies go all the way up to 5100MHz as well, which is pretty much beyond what modern DDR4 kits can handle anyway. There’s even CrossFireX support for AMD video cards.