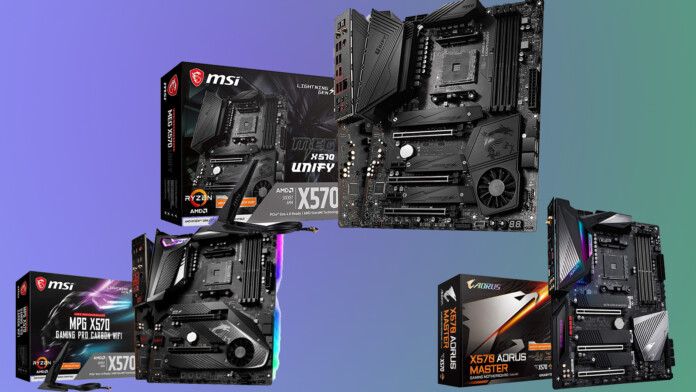 The Ryzen 7 5800X is AMD’s mid-tier processor based on the new Zen 3 architecture, and it is meant for people who need a bit more power when it comes to both gaming and work. While the base and boost clock speeds are only 100MHz higher than on the Ryzen 5 5600X, the CPU comes with two additional cores, translating into four extra threads.

The TDP is actually considerably higher than on the 5600X since the 5800X can eat up to 105W while operating at peak boost speeds, which is a decent jump from the 65W dissipated by the 5600X. As such, even though you can definitely plop this CPU onto a budget motherboard as well, the higher TDP means that you will get better results with a slightly more premium VRM.

With all that out of the way, here are the best motherboards you can pair with the Ryzen 7 5800X:

Features: The MEG X570 ACE is designed to both look and perform like a high-end motherboard. Most of the PCB is covered in heat sinks, and the heat sinks themselves are covered in RGB lighting to drive the ‘gaming’ point home.

With that being said, this is truly a perfect board for gamers, especially in terms of RAM frequencies, M.2 slots, and PCI-Express slots. RAM speed can exceed 5000MHz with the right kit, and you can also fit up to three M.2 NVME drives, and each one is protected by a metal cover that also keeps them cool.

Three PCIe 4.0 x16 slots are available, which unlocks the possibility of an SLI setup. The VRM is also built using the best components, not to mention that most of them are under a thick metal heat sink.

Connectivity: The rear I/O looks pretty good as well. There are two Ethernet ports for both 1Gbit and 2.5Gbit connections, Wi-Fi and Bluetooth connectors, as well as dedicated buttons for BIOS flash and clear. The integrated audio module comes with the usual five jacks + one optical output.

The USB ports are spread pretty evenly in terms of transfer speed, with two USB 2.0 ports, two USB 3.2 Gen 1 ports, three USB 3.2 Gen 2 ports, and one USB 3.2 Gen 2 Type-C port. Funnily enough, there is also a PS/2 port, just in case you are still using an older keyboard or mouse.

There is no video output on this board, which is fine for the 5800X because it doesn’t feature integrated graphics anyway.

Performance: As you can expect from a top-shelf motherboard, nothing is holding you back from getting all the juice out of your components. CPU overclocking should be a breeze as long as you have the proper cooling, and it’s also nice to see that you can push your RAM to some decent speeds as well.

In addition, the three M.2 slots can make for a lightning-fast NVME RAID configuration, which is indeed supported by the board. Lastly, the three PCIe x16 slots will never be all populated by GPUs, but they can definitely come in handy with other add-in cards.

Features: Everything component on the GIGABYTE X570 AORUS Master was picked based on performance and quality, which means that your 5800X will be able to spread its wings once it’s in there. Just like on the MEG ACE from MSI, everything is more or less covered by metal heat sinks, which is definitely necessary if you are planning on doing some overclocking.

According to GIGABYTE, this motherboard can push your DDR4 memory all the way up to 4400MHz, which is more than plenty for the Zen 3 architecture. You can also install up to 3 M.2 drives, each one of which is covered by a metal heat sink to keep the temps under control.

The board features a triple PCI-Express x16 configuration, which allows you to populate it with everything from GPUs to fast storage devices. There are no video outputs on the rear panel, but that’s not a problem with the 5800X anyway.

Connectivity: Like every high-end board out there, the AORUS Master comes with plenty of ports, especially if we are talking USB. Two Ethernet ports are also available, and you can pick between both 1Gbit and 2.5Gbits, depending on your connection.

Other than that, the board also includes a Wi-Fi module, as well as Bluetooth connectivity. The integrated audio chip features a 5-input configuration and an optical output, so nothing is missing in this regard.

Performance: If you want to push your Ryzen 7 5800X to higher frequencies, this board can handle it without problems. The VRM is more than capable of keeping up with the increase in current, and the temperatures should also be pretty reasonable thanks to the heat sinks.

The PCIe 4.0 support means you can play around with Gen 4 NVME drives as well, which should keep your system relevant for a few years into the future. The same is true for the x16 GPU slots, which should work quite nicely with the latest GPUs from both Nvidia and AMD.

Features: There’s not much separating this model from the previous MEG board on this list, especially when it comes to performance. On the other hand, you will have to give up on a bit of bling in the process - which may not be a bad thing at all for many people.

First off, the VRM performance and cooling are just as robust on this model, which means you can get the same OC performance out of your CPU. Besides, the same is true for the RAM frequency, which still goes all the way up to 5000MHz.

Three M.2 slots and 3 PCI-E x16 are included as well, just like on the more expensive model. What’s not included is some of the RGB lighting, but that has no impact on performance anyway. A secondary 1Gbit Ethernet port is missing as well, although you do get the 2.5Gbit one.

Connectivity: Things are very good in this regard as well, especially since you are not limited to older USB 3.0 versions. Both 3.2 Gen 2 and even Type-C are available, not to mention the trusty USB 2.0 ports.

As mentioned before, there is only one Ethernet port on this board, but at least it’s the 2.5Gbit one, so you are not limited in terms of speed. Both WI-Fi and Bluetooth are available as well, plus a PS/2 port if you want that minimal input lag experience for your mouse/keyboard.

Other than that, there are five audio input ports and a S/PDIF optical output, as is standard on most modern boards in this price range. As an extra, there is a CMOS clear button on the rear I/O, plus a BIOS flash button for easy updates.

Performance: Since the MEG Unify is quite similar to the MEG ACE in terms of performance, you can expect pretty much the same results on both boards, except this one is slightly cheaper. You are also not losing anything in terms of PCI-Express connectivity and support.

For overclocking purposes, this motherboard allows you to push your CPU as far as you are willing to go, provided you have the means to keep the chip cool while doing so. The VRM is steady enough to handle the excess current required by an overclocked processor.

Features: If you are willing to let go of some extra features to save some cash, the MPG Gaming Pro from MSI is designed to offer all the X570 benefits in terms of overclocking while taking away quality-of-life features.

First, this board supports memory frequencies of up to 4400MHz, which is slightly below the previous MSI models on this list. 4400MHz is still not a bad deal, on the other hand, especially since very few memory kits can achieve these speeds anyway.

The extra PCI-Express x16 slots and M.2 slots are some other things you must give up on. Only two of each are present on the board, although that should still be enough for most use cases anyway. The Ethernet port is limited to 1Gbit this time around, so that’s another downside.

Connectivity: With that being said, the rear I/O is still fairly generous. There are three USB 3.2 Gen 2 ports, two USB 3.0 Gen 1 ports, one Gen 2 Type-C port, as well as two USB 2.0 ports. As a bonus, you're getting an HDMI output as well, even though that would not see any use if you are using the Ryzen 7 5800X.

Thankfully, the Wi-Fi and Bluetooth modules are not missing, so you can still connect to the Internet without using a cable. The audio interface is pretty much similar to the more expensive models, complete with the optical output.

The only other thing you are not getting is a CMOS clear button, which would be pretty useful for overclockers. Instead, you are only getting a BIOS flash button, which is definitely not going to see a lot of action.

Performance: Once again, the VRM on this board is perfectly capable of pushing your CPU to its limits since this is still an X570 chipset. You will have to live with a maximum of 4400MHz in terms of RAM speed, but that’s not the end of the world by any means.

The missing third PCI-Express x16 slot is almost a non-issue for gamers, especially since Nvidia SLI is dead in the water at this point. Two M.2 Gen 4 slots should also be enough for gaming purposes.

Features: In case you really don’t want to spend too much on an X570 chipset, the TUF Gaming X570-PRO from ASUS is a pretty good entry-level choice. Obviously, you need to forget about anything other than the basics in most cases, but the performance level in terms of overclocking should be similar to the more expensive models.

First off, the RAM frequency support goes all the way up to 5100MHz, which is frankly incredible for this price range. On the other hand, you only get 2 M.2 slots, only one of which features a heat sink for cooling.

While there are two PCI-Express x16 slots, only the top-most one is Gen 4.0, and that’s also the only one that features a metal reinforcement to keep your GPU from sagging. That’s obviously not a problem if you want a single-GPU system, however.

Connectivity: If you take a look at the rear I/O, you will actually be pleasantly surprised by what you see. There are four USB 3.2 Gen 1 ports, two USB 3.2 Gen 2 ports, and one USB 3.1 Gen 1 Type-C port.

The big surprise comes in the form of a 2.5Gbits Ethernet port, which is a rare sight on most budget motherboards. Moreover, both Wi-Fi and Bluetooth modules are included, which is pretty cool to see.

Two video output ports are included, too: one DisplayPort 1.2 and one HDMI 2.0 port. None of them will be of much use when paired with a 5800X, but it’s always nice to have them in case you decide to use this motherboard in a different system.

Performance: The whole point of getting an X570 chipset instead of the B550 is that you get better OC support. That holds true for this model as well, especially since the VRM is very potent in terms of cooling and amperage.

With that being said, you can forget about SLI setups or anything involving more than two NVME drives. The heat sinks are also not quite as thick as on other models, so you may experience slightly higher temps in certain scenarios.