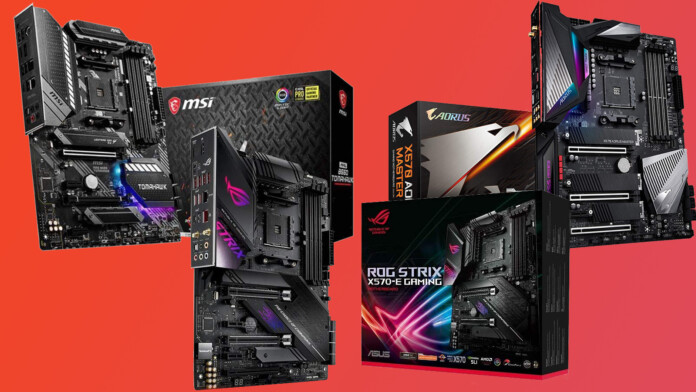 AMD has kept its word in regards to maintaining the AM4 socket for the Zen 3 architecture as well, which means that you do not necessarily have to upgrade your motherboard in order to install a Ryzen 5000 series CPU. Even the old B450 and X470 chipsets can be BIOS-updated to support the new processors, although that task falls on the motherboard manufacturers instead.

On the other hand, the new B550 and X570 chipsets also come with support for the new PCI-Express 4.0 standard, which is the future in terms of fast storage, video cards, and other high-bandwidth add-in cards.

With all that in mind, here are the best motherboards you can buy for the new Ryzen 5 5600X processor from AMD:

Features. This is the high-end choice for gaming enthusiasts, mainly because this board is designed for overclockers. The VRM is covered in heatsinks and built using the best components available, which should allow you to push your CPU to high clock speeds without running into current limitations.

On top of that, the motherboard also supports RAM frequencies of up to 4400MHz in OC mode, while also sporting a total of 3 PCIe x16 slots, one of which is x16 Gen 4. Speaking of which, you also get 3 M.2 slots to play with, which allows you to connect up to 3 NVME drives.

Connectivity. The AORUS Master provides you with a plethora of input ports, as well as slightly more exotic things that cannot be found on cheaper models. To begin with, there are 4 USB 2.0 ports, 2 USB 3.0 ports, 3 USB 3.1 ports, as well as one USB Type-C port.

The extras come in the form of two Ethernet ports: A 1Gbit port and a 2.5Gbit port, just in case you have access to incredibly good Internet. On top of that, there is also a Wi-Fi chip and a Bluetooth 5.0 chip, which makes this board incredibly versatile in terms of connectivity.

Other than that, you are getting a pretty good audio interface, complete with a S/PDIF output and gold-plated inputs for your speakers. The rear I/O also includes a CMOS clear button, which means that you don’t have to open up your computer in order to restore your BIOS to the factory settings whenever something goes wrong.

Performance. Unlike Intel CPUs, Ryzen CPUs do not require a special motherboard chipset in order to be overclocked. The 5600X is not locked, and you can OC it on pretty much any motherboard.

With that being said, the superior VRM configuration on the AORUS Master makes this task a lot easier and much safer. Not only that, but you can also take advantage of the higher memory frequencies in order to gain even more FPS.

Features. The ROG Strix line-up from Asus is primarily aimed at enthusiasts, which is why most products also come with a hefty price tag. In this case, you are getting the full 2020 experience, complete with PCIe Gen 4, multiple M.2 slots, and the Aura Sync RGB Lighting.

There are 4 DIMM slots that support DDR4 memory sticks running at up to 3600MHz in OC mode. Granted, that’s not quite as high as it gets nowadays, but it’s not bad either. As you can expect, the VRM is covered in head sinks, which allows you to push your CPU to crazy frequencies without worrying about amperage or temperature.

Lastly, the board also comes with 2 PCI-Express x16 4.0 slots, which allows you to use the SLI technology from Nvidia if your wallet can handle it. A couple of Gen 3.0 PCIe slots are also included, so you should be able to connect all sorts of add-in cards.

Connectivity. In terms of connectivity, the ROG Strix X570-E matches the AORUS Master in most regards. The only major difference is that this board also includes a DisplayPort 1.2 and a HDMI 2.0 port, which are actually completely irrelevant for the Ryzen 5600x, because it doesn’t come with an integrated GPU.

USB-wise, the board features 7 USB 3.2 Gen 2 Type-A ports and no other options, except for a single Type-C. The good news is that USB ports are backwards compatible anyway, so you are not losing anything by not having 3.0 or even 2.0 ports at your disposal.

There are also two Ethernet ports you can make use of, one of which supports 2.5Gbits instead of the 1Gbit found on the other. A Wi-Fi module is included as well, not to mention the Bluetooth 5.0 connectivity.

Performance. Thanks to the great VRM cooling and premium-grade capacitors used to control the current, this board should allow for incredibly high clock speeds, at least if your system cooling can keep up.

The only slight downside is the fact that you are only allowed to go as high as 3600MHz when it comes to RAM frequency, which is actually a bit disappointing to see in 2020. We already know that the Zen 3 architecture is at its best when paired with fast RAM, and these speeds no longer cut it, unfortunately.

Features. Even though this is a B550 chipset, the TOMAHAWK actually impresses in many regards. In fact, it manages to surpass many X570 boards in some areas, which is no small feat. The most surprising fact is that you can push your RAM to up to 5100MHz, which is higher than you would expect on this chipset.

In addition, you are also getting VRM heat sinks and an integrated I/O shield, which is not that common at this price point. Two M.2 PCIe slots are included as well, and that’s on top of the 6 SATA ports. Granted, you will have to make do without a Wi-Fi module or Bluetooth, but that’s not a major issue for most gamers anyway.

Connectivity. In fairness, this is where the lower price tag comes into play, although there are still some surprises. There are 2 USB 3.2 Gen 1 ports, 1 USB 3.2 Gen 2 port, 1 3.2 Gen 1 Type-C port, and two USB 2.0 ports. However, the board does support multiple front inputs as well, at least if your case is compatible.

The surprise comes in the form of 2 Ethernet ports, including a 2.5Gbit port. That’s definitely not something you see on medium-tier motherboards, so it’s quite the sight. Unfortunately, there is no Wi-Fi module to speak of, so you will have to install an add-in card if that’s what you need for your setup.

Performance. While it’s generally true that B550 motherboards are not usually known for their overclocking prowess, MSI seems to think otherwise. This board can definitely get your Ryzen 5600X above stock speeds, mainly thanks to the shielded VRM and the unlocked BIOS.

In addition, there’s also the fact that the motherboard supports 4 RAM sticks running at up to 5100MHz in OC mode, which is a lot better than many X570 models. You can also fit up to 128GB of RAM on it, while most B550 boards are limited to 64GB.

Features. GIGABYTE does not limit its AORUS line-up to the X570 chipset, which means that you do not have to pay through your nose in order to get premium components. The AORUS Elite is designed to push the new Ryzen 5000 series to its limits, while still offering some nice bonuses in terms of connectivity.

The first thing to note is that you can cram up to 128GB of RAM into the 4 available DIMMs. The supported frequencies go all the way up to 4400MHz, which is not bad at all for a B550 chipset. You can even push that a bit higher if you go with a previous generation of Ryzen CPUs with an integrated GPU.

There is only one full x16 PCI-Express 4.0 slot, but that should definitely be enough for most people, especially since SLI is not really a thing for the Nvidia 3000 series. Other than that, you also get 2 M.2 slots, one of which comes with a heatsink and PCIe Gen 4 support.

Connectivity. As always, the lower price means that you have to give up on a few I/O ports, as well as things like Wi-Fi and Bluetooth. Even so, the only Ethernet port on the board is a 2.5Gbit one, which means that you are definitely not losing speed in this regard.

No Wi-Fi module is present either, so you will have to add one yourself by purchasing a PCIe card. On the other hand, the audio interface is pretty good, with 5 input jacks and a S/PDIF output.

Performance. Again, the great VRM cooling system makes this board a very good choice for overclocking enthusiasts, especially since you can also push your memory to decent speeds as well.

You can also make your operating system a bit faster with the Gen 4 M.2 slot, although it's pretty difficult to tell the difference at the moment when it comes to system responsiveness. RAID configurations are also possible for the two M.2 drives.

Features. In truth, this is a budget option for people who are not interested in overclocking their CPU and generally don’t care about pushing their components beyond their stock numbers. With that being said, this board can comfortably run the best components on the market when it comes to CPU, GPU, and NVME storage, so you are not missing much in that regard.

The first thing you notice is the general lack of VRM cooling, which means that you should probably not try any serious OC. On the other hand, you still get 4 DIMM slots for your RAM, with support for up to 128GB of DDR4 memory. The memory frequency support also goes all the way up to 4400MHz, which is quite incredible at this price point.

Lastly, this is still a PCIe Gen 4 board, which means that you get support for Gen 4 GPUs and M.2 drives. That’s no small thing on a budget board. The only thing you should be wary about is the fact that this board does not have the usual on-board fan for the PCIe 4.0 chip, since GIGABYTE opted to go with a simple heat sink instead.

Connectivity. This is where the low price makes its presence felt. There are no USB 3.2 Gen 2 ports at all, so what you actually get is the following: 4 USB 3.2 Gen 1 ports, and 4 USB 2.0 ports. There is no Type-C port anywhere, so you are out of luck if that’s on your requirements list.

In addition, this board features a classic 1Gbit Ethernet port only, and obviously no Wi-Fi or Bluetooth modules. There are also only 3 audio jacks instead of the usual 5. Weirdly enough, there is a DVI-D video output and a PS/2 port.

Performance. As mentioned before, this is not the kind of motherboard that you will be able to use for overclocking. However, this is still good enough to run all of your components at stock speeds, regardless of whether we are talking about an older GPU, or the newly released RTX 3090 from Nvidia.

There’s also the fact that you can really push your RAM in terms of frequency, which is very important for Ryzen 5000 CPUs. Your mileage may vary in this regard, especially with cheaper memory sticks, but it’s nice to know that the board does not artificially limit you like Intel chipsets usually do.