Surfshark Free Trial vs. Paid Subscriptions (2021) – What Do You Get From Each? Which One to Pick? 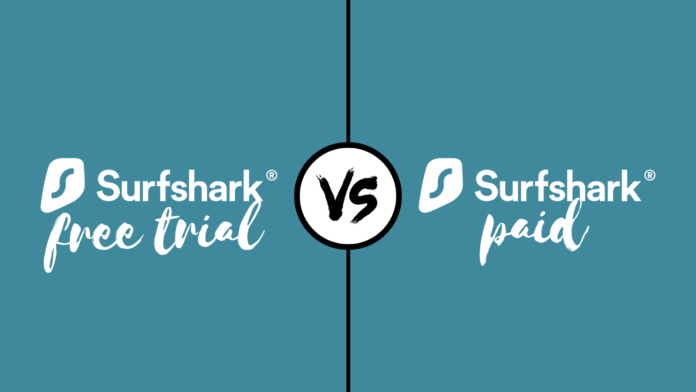 You'll find Surfshark often mentioned on our website, like in our guide on the best VPN trials and our overview of the best VPNs available today. That’s because this is a hugely powerful yet very simple VPN solution. With that said, we’re sure you’d like to try it out first. So, we wish you a warm welcome to our Surfshark free trial vs. paid subscriptions comparison!

Before we jump right in, a few valuable pieces of information. Know that Surfshark's free trial is available on Android and iOS/iPadOS. You’ll get to test it for 7 days – but you’ll be charged once your trial ends (you’ll need to agree to Surfshark’s annual plan while signing up).

And then, you have an option to subscribe to Surfshark directly via its website. That means that all of the VPN’s features will unlock from the get-go. However, that also means that you’ll be charged immediately. If that sounds a bit confusing, stick with us until the end of this article, and all your questions will be answered.

This guide focuses on comparing Surfshark’s free trial and paid subscriptions. So, if you’d like a more thorough look at the VPN’s background, features, and capabilities, make sure to turn to our Surfshark review.

Finally, let's start with our Surfshark free trial vs. paid subscriptions comparison by looking at a series of features and aspects of this capable VPN.

First, let’s see what devices and platforms are supported by Surfshark’s trial. Then, we’ll compare that to the VPN’s standard subscription plans.

SUMMARY: Both Surfshark's free trial and paid subscriptions let you use the VPN across all of its supported platforms. However, if you opt for the trial, you'll need to use a very specific way to unlock all of Surfshark's features.

Wondering whether Surfshark's free trial comes with limited features? Let's answer that and then compare it to what you get from Surfshark's premium subscriptions.

SUMMARY: It’s true that both Surfshark’s trial accounts and regular subscriptions come with an identical set of features. So, no matter which path you pick, you’ll get easy access to both standard and advanced privacy-protecting features.

Surfshark comes with an extensive server network. So, let’s check what kind of access to that network you can expect, depending on your type of account/subscription.

SUMMARY: You don’t have to worry whether Surfshark will limit your access to its network if you pick its trial. Everything will come unlocked, which will also be the case for those who opt to pay for the VPN’s subscription.

When testing or using any VPN, you don’t want to encounter any data or speed limitations. So, let’s check the situation with Surfshark’s trial and full subscriptions from that aspect.

SUMMARY: No matter if you pick the VPN's trial or pay for its subscription, we think you're going to like its performance. Overall, this is a fast VPN, which can be further optimized by switching between its protocols and different servers.

You’ll find Surfshark mentioned in our guides on the best VPNs for media streaming, live sports streaming, and torrenting. That gives you an indication of what to expect from this segment.

SUMMARY: We think you’re going to love Surfshark’s streaming and torrenting capabilities while using its 7-day trial. In fact, those alone might be enough to persuade you into becoming a paying customer.

We'll talk about the VPN's customer support system in this segment of your Surfshak free trial vs. paid subscriptions comparison. Here's what you need to know.

SUMMARY: We can only praise Surfshark’s customer support – which comes with plenty of resources and communication methods. And yes, all of that is available to both free trial account holders and regular subscribers.

Let’s conclude our Surfshark free trial vs. paid subscriptions comparison by checking this VPN’s pricing structure. To begin, check the table just below.

SUMMARY: It’s true that you can test-drive Surfshark without paying anything – for up to 7 days. However, paying for this VPN comes without any risks, as it comes with money-back guarantees. So, you won’t make a mistake either way.

In the End – Worth Getting Surfshark’s Trial? Should You Pay Straight Away Instead?

Finally, before we draw our conclusions, let’s highlight some of the most prominent features of Surfshark’s free trial and paid subscriptions – and compare them directly.

If you decide to get Surfshark’s 7-day trial, know that you won’t encounter any restrictions. Still, keep in mind that you’ll need to activate your trial on iOS or Android. And also, unless you cancel on time, you’ll be charged automatically once your trial ends.

If you decide to get Surfshark’s subscription, you can do that via its website. Even though you'll be charged immediately, you can still count on Surfshark's 30-day money-back guarantee. On top of that, getting a subscription is cost-effective, as you can choose from a broader range of subscription plans.

That would be all for our Surfshark free trial vs. paid subscriptions comparison. If you have any questions for us, post them via the comments section below. And finally, thank you for reading!