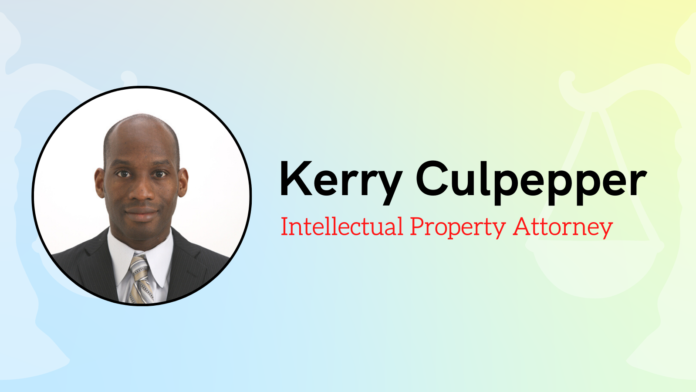 Kerry S. Culpepper is a successful Intellectual Property attorney who has been giving pirating platforms in the US a hard time in the past few years. He has been involved in the targeting of the YTS platform, the APKMirrorDownload.com, the CotoMovies app, and has also managed to get DMCA subpoenas signed off in the US courts. More recently, the Hawaiian lawyer has incorporated a company that is meant to apply pressure on popular pirating platforms by using their recognizable brands against them.

We have reached out to K. Culpepper to find out more about how fighting piracy works, ask for his personal opinion around matters of copyright protection laws, and also get to hear his views on the subject. Admittedly, copyright infringement isn’t a one-dimensional issue, and the short interview below is underscoring this fact.

TechNadu: Can you give us the short version of the background story of what brought you from the world of Civil and Electrical Engineering to that of intellectual property protection?

I had college professors tell me they thought I would be a good lawyer, but I was not interested until a good visionary friend of mine told me about how the Internet was going to change everything and how critical intellectual property would be in the new business environment. After finishing law school in 2000, I got my Masters in electrical engineering at night while working at a law firm during the day to further advance my career.

TechNadu: Do you feel that the laws protecting copyrights in the United States are adequate, or is there a problem with pirates taking advantage of loopholes right now?

There are challenges. A first issue is that sometimes a court will not let a rightsholder proceed against a foreign national operating a streaming website even though the website is in English, promotes almost exclusively US movies, and sometimes even claims to take benefit of US law via a DMCA policy per 17 USC 512.

Another issue is the DMCA provision (j)(1)(B)(ii), which permits a copyright owner to obtain a court order forcing an ISP to block a website originating from a foreign country that has infringing material. In practice, it doesn’t work because the ISPs just give excuses. The provision does not provide for attorneys’ fees, so my clients would have to pay to make the ISP do what they’re supposed to do. Of course, there are other issues.

TechNadu: On the matter of DMCA subpoenas targeting the identities of individual pirates, how do you perceive the argument of the poor linkage between the owner of the internet connection and the actual infringer?

Sometimes the infringer is not the subscriber, but we usually can determine who is the actual infringer. However, we cannot even conduct the investigation to find the actual infringer until we know who the subscriber is. That is why the DMCA subpoena or the court order for early discovery is very important. Sometimes the infringer does not even know the app they are using to watch the movie is illegal because it was openly advertised. I did not have sympathy for a person making such an argument until an elderly gentleman who had infringed some of my clients’ movies showed me a now-defunct website called “showbox.co/showboxappdownload.co” back in 2018. Here is one portion: 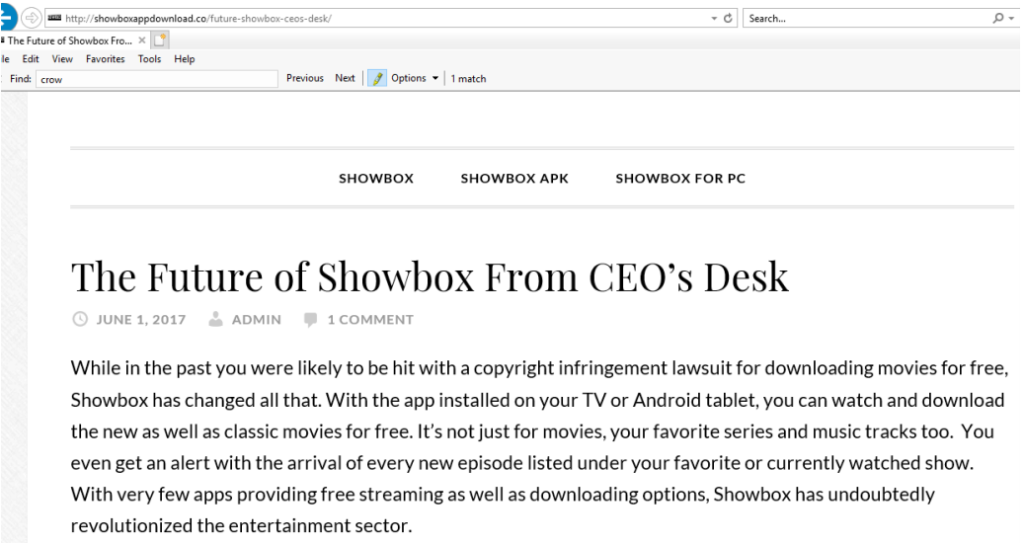 I think it would be difficult for an everyday person to know that an app/website is legal or illegal when it’s advertised on a professional website such as this openly under a (fake) official company name and a (fake) official CEO profile. From that time, we begin shifting our focus to trying to shut down the major websites/distributors that are promoting these illegal apps.

However, without getting the subscriber identities, it would be difficult for us to find out what apps these people are using. To that end, the DMCA subpoena and early discovery are still important.

TechNadu: Should the subscriber have full control and knowledge of who is using their connection and for what purposes, or should US courts protect them on the basis of uncertainty?

I am a parent, so I know how tough it is to try to monitor your kids’ Internet usage. That is why I believe it is important for the ISP to forward to the subscriber the copyright infringement notices the rightsholders send, as discussed below in my answer to question 12. If a subscriber receives a notification from their ISP that infringing activity has occurred on the subscriber’s network, then I think the onus really is on that subscriber to take steps to find out what is going on and stop it.

TechNadu: Do you feel that tech giants that play a pivotal role in the whole situation like Google are doing all that they can to tackle piracy? Are DMCA takedown notices handled in a timely manner?

DMCA notices are handled, but my impression is that some companies are doing the bare minimum. I have sent multiple notices to Twitter regarding accounts associated with the piracy services Media Box HD, but all Twitter does is remove the specific Tweets. I would think Twitter would look at the situation and decide that these accounts should be terminated.

I sent the above email to Twitter because I noticed that this person started offering special “Lifetime VIP membership” packages on Twitter when he realized I had obtained his identity from his domain registrar.

Unfortunately, Twitter hasn’t terminated his account, so the Twitter users that paid the “lifetime subscriptions” may soon be disappointed. By the way, this person has offered to give up his users’ information to me – see below.

Similarly, I have sent multiple DMCA notices to Amazon Web Services regarding the website YTS. MS, but all they will do is make the website owner take down the specific pages for the movies related to the DMCA notice. I assumed that since Amazon has the Amazon Prime streaming service, which is hurt by piracy, AWS would be eager to get rid of a website like YTS. MS, but it is still up.

TechNadu: From your perspective, where does copyright damage compensation trolling begin and end? Do you feel that some rightsholders over-zealously seeking reimbursement, or are they merely protecting their work, profits, and in the end, their very existence in a competitive market? We have seen risky trends on that part in Sweden recently, but what is the situation with copyright trolling in the US?

I cannot comment on Sweden. In the US, there was the extremely bad case of the Prenda attorneys who are now in jail or about to be. On the other end of the spectrum, my clients’ motion pictures have been widely released and marketed in the United States, if not the entire world. I think they have a right and obligation to their investors to try to protect their intellectual property.

TechNadu: Last year, your name was involved with lawsuits against the YTS platform, and in some cases, undisclosed extrajudicial settlements were rumored. YTS is still up and running, with some titles having been removed now. Can you tell us anything about that, or are the cases still ongoing?

The YTS.LT/YTS.AM operator agreed to remove my clients’ movies, adopt filters to prevent them from being re-uploaded and paid damages in the last of the three cases. The last stipulated judgment against his company and him jointly was entered this past Thursday for a total of $1,050,000.

Just a few days ago, the court endorsed a stipulated judgment between the operator of YIFYMOVIES.IS (a Vietnamese national and different individual from the YTS operator) and my clients. I don’t represent all the movie studios, so if a pirate site operator agrees to remove my clients’ movies and pay damages, I consider it a victory. If other movies from other studios are still up, those studios need to hire me because I have no authority to make demands on behalf of entities I don’t represent.

TechNadu: In the case of the CotoMovies, users fear that prosecutors may use the PII or IP addresses of individual subscribers to target them. Has this case been terminated, and can you comment on anything regarding it?

If you mean criminal when you say “prosecutors,” I am not aware of any criminal proceedings. Regarding civil action, right now, we are focusing on the original streaming source of our clients’ movies that the CotoMovies app linked to.

TechNadu: You have recently incorporated a company that has trademarked popular piracy brands like the YTS and Popcorn Time. Can you tell us a few things about your future plans on this new platform? Also, are your hopes high that this effort will finally checkmate the resilient YTS, or is this meant to introduce just another obstacle in their way?

In the long term, 42 Ventures LLC (“42”) plans to use the platform to politely push people to legitimate apps like Netflix. In the near term, 42 plans to take aggressive legal action including domain disputes against websites that are infringing its trademarks. Those website operators that strongly believe they were using these marks in commerce prior to 42’s registration can share with me their identification information and evidence of their prior rights or legitimate interests.

TechNadu: In 2019, 200 students of Law at Harvard University have voted on the ethical side of piracy, characterizing the avoidance of payment as acceptable, especially when the infringer has limited financial resources. Where do you stand on that, and should the spirit of the law be interpreted on the basis of the financial situation of the infringer? Should casual pirates be exempted from harsh penal targeting?

I am not a criminal defense lawyer, but I do not believe casual pirates have ever been subject to harsh penal targeting in the US.

I am disappointed to read that many younger lawyers apparently think copyright infringement might be acceptable if the infringer isn’t making money. I suppose since I have a background in working in Intellectual Property and an older sister who is a successful director, I have more appreciation for the immense amount of time, effort, money, and risk that goes into creating Intellectual Property than these individuals.

TechNadu: As an experienced and successful intellectual property advocate, where do you see the solution in the whole piracy problem? Some believe that as long as the copyright holders are keeping their prices illogically high, there will always be illegal and cheaper alternatives on offer. Do you agree with this notion, or do you see another way?

I believe the solution to piracy is for the ISPs and host providers to terminate the accounts of repeat infringers when they receive multiple infringement notices. Unfortunately, it may take a few more Cox-style multi-million dollar verdicts before the ISPs decide to do so.

If the prices are illogically too high, don’t watch the movie. This is not life-saving medication, so nothing is going to happen to you if you have to wait to watch the movie six months later or cannot see it at all. The copyright holder could create a single copy of the motion picture and only sell a single copy for $2,000,000 like Wu-Tang Clan did in 2015. I think only a few hundred people have even heard that album. I know I haven’t heard it and really wanted to, but since I didn’t have the money to buy it, I moved on to something else.