How to Watch Sneakerella on Disney Plus 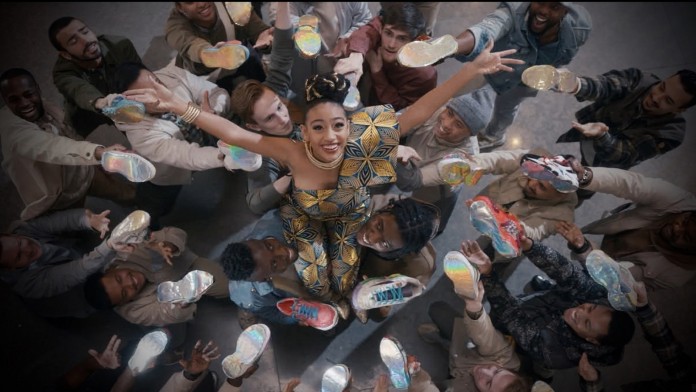 A new original movie is set to premiere soon, this time one inspired by the great classic tale of a beloved princess - Cinderella. Of course, this title has a modern twist, and we will be able to watch it online quite easily. We have all the information you may need on the cast, release date, and plot, so let's see when, where, and how to watch Sneakerella online from anywhere.

Sneakerella is a high-energy, music-driven movie set in the vibrant street-sneaker subculture of New York City that puts a contemporary twist on the Cinderella fairy tale.

El is an aspiring sneaker designer from Queens who works as a stock boy in the shoe store that once belonged to his late mother. He hides his artistic talent from his overburdened stepfather and two mean-spirited stepbrothers who constantly thwart any opportunity that comes his way. When El meets Kira King, the fiercely independent daughter of the legendary basketball star and sneaker tycoon Darius King, sparks fly as the two bond over their mutual affinity for sneakers. With a little nudge from his best friend and a sprinkle of Fairy Godfather magic, El finds the courage to use his talent to pursue his dream of becoming a 'legit' sneaker designer in the industry, so she is now ready to lace up and dream big.

Sneakerella was supposed to air in February, but it will premiere on Friday, May 13, 2022, instead. We will be able to watch this original movie on the Disney Plus streaming platform. As it usually happens with new content on streaming platforms, this title will become available sometime after midnight PT (03:01 am ET). This is only one of the many new original Disney titles landing this year on the streaming platform.

How to Watch Sneakerella on Disney Plus

This new and exciting title is a Disney original series, so we will be able to watch Sneakerella on Disney's streaming platform. All you have to do is subscribe to the Disney Plus service for a moderate monthly fee, and you will be able to do that in the countries where the streaming platform launched, including the US, the UK, Canada, and Australia. The subscription price offers access to the entire library, which hosts various titles from Disney, Marvel, Star Wars, Pixar, and The Simpsons, among others, besides National Geographic titles.

You have another great option besides subscribing to Disney Plus as a standalone service if you live in the United States since American customers can get the Disney Plus, ESPN Plus, and Hulu bundle and save 25% compared to the monthly cost of subscribing to all three services separately. If this bundle is the one that's better suited for your needs, know that you can choose between Hulu with commercials for $13.99 per month or Hulu (No Ads) for $19.99 per month.

The Disney Plus platform is compatible with mobile devices and tablets, both iOS and Android, Smart TVs, gaming consoles, and more - and you can check the full list here. Also, Disney Plus is expanding to other countries and has already announced price tiers, so fans will be able to watch it in more territories starting this summer.

However, keep in mind that you may not be able to access some titles or the entire platform while traveling due to geo-restrictions they have in place since the Disney Plus streaming service is not available everywhere.

Can I Watch Sneakerella for Free?

There are a few ways to watch Sneakerella on Disney Plus for free, even though Disney's streaming platform does not offer a free trial on its own right now.

You can take advantage of a very extensive free trial if you're a Verizon subscriber with select Unlimited plans (or if you upgrade to Unlimited), as the telco offers six months of free Disney Plus for eligible new and existing customers. You will be charged the standard price for a standalone Disney Plus subscription on the streaming platform after the free trial ends, which is $7.99 per month. However, we should mention that you should be careful what you choose since Verizon also offers The Disney Bundle for Unlimited subscribers, but this one does not have a free trial.

There are also on-and-off promotions that include the Disney Plus service for free with Amazon Music Unlimited or Xbox Game Pass Ultimate. We recommend you check those services to see if the deals become available again when you decide to become a customer.