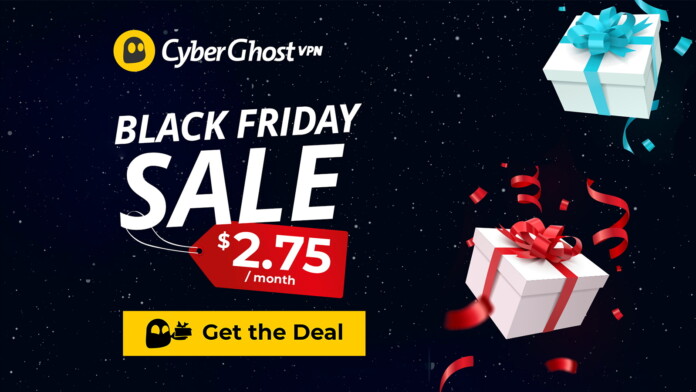 CyberGhost VPN is, without any doubt, one of the most powerful and user-friendly VPNs on the market. With a long history of protecting its users from all around the world, this VPN is no stranger to battling strong anti-VPN measures. As many of us expected, CyberGhost has now joined the ranks of VPNs that celebrate this year’s Black Friday, by offering a special deal on its long-term subscriptions. So, let’s see how much you’ll need to pay, and how much you can save right now.

If you pay on a monthly basis, CyberGhost VPN is typically priced at $12.99. The truth is that it’s not the most affordable VPN around, but it’s well worth its price, nonetheless. However, we all know that this year’s Black Friday is in full swing. Well, you can now save up to 79% and pay only $2.75 per month (if you decide to get this VPN’s one-year subscription).

Still, let’s not forget to mention what it says in the fine print. You’ll be charged $33.00 for your first year of use, as a one-time purchase. Then, the price will be $66.00 per year, which still sounds like a good deal as you’ll save over 50% on this VPN’s regular monthly plan. All in all, we believe this to be a magnificent Black Friday deal that definitely deserves your attention.

So, what will you get with a CyberGhost subscription? Well, you can learn more about this VPN in our hands-on CyberGhost VPN review. However, let’s give you some highlights:

So, does CyberGhost VPN sound interesting? We’re sure it does! If you’d like to learn more about this VPN or subscribe to CyberGhost VPN, make sure to use the provided link. You’ll get to the VPN’s Black Friday page, where you can check out the additional details. Once again, we’ll remind you that this Black Friday offer helps you save 79%, as you can pay only $2.75 per month for this VPN.

Finally, please note that you can pay via credit cards (Visa, MasterCard, and American Express), PayPal, as well as via BitPay. You will also get a 45-day money-back guarantee, which means that you have nothing to lose. So, go ahead and get this CyberGhost VPN Black Friday deal while it still lasts.

So, what do you think about this deal? Are you interested in signing-up or switching to CyberGhost? Let us know in the comments section below, and make sure to follow us on Facebook and Twitter. Thanks!