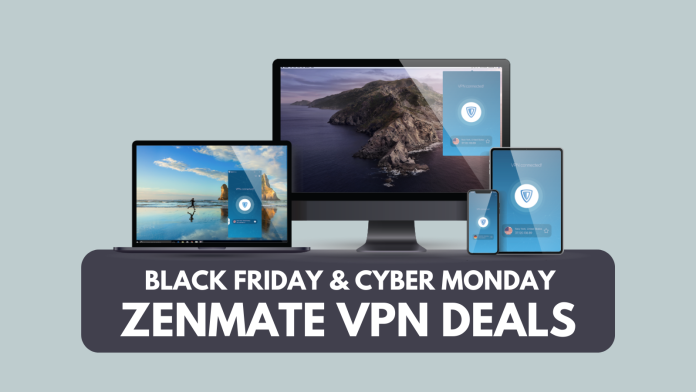 ZenMate is a rapidly developing VPN service, known primarily for its value. It comes with a whole slate of features to help you protect your privacy, unblock websites, and more - without making things more complicated than they have to be. However, as part of special ZenMate Black Friday deals, you can now buy this VPN at its lowest price yet.

That’s right, ZenMate has reached its lowest price yet, which means that its value has never been greater. On top of that, the ZenMate Black Friday sale will give you some extra time added to your subscription. So, it’s not an overstatement to say we’re talking about one of the best Black Friday / Cyber Monday VPN deals here.

Yes, ZenMate offers Black Friday and Cyber Monday deals, which are already available. In other words, this VPN currently offers a custom long-term plan, letting you subscribe for 18 months for only $1.99 per month. When compared to its regular price, you’ll save 82%.

As you can see, we’re talking about pretty massive savings here. However, ZenMate VPN goes beyond that. It gives you 3 extra months for free – added to your first billing period.

The ZenMate Black Friday 2022 sale is already live on the VPN’s website. This is a time-limited offer, and since this year’s Black Friday and Cyber Monday are just around the corner, don’t forget to act on time.

We’ll also note that ZenMate’s Black Friday promo won’t be changed in the near future. So, if you’re waiting for an even lower price – don’t get your hopes up. In fact, if you’ve been thinking of becoming a subscriber, now’s the right time to act.

ZenMate’s 18-month plan is the plan with this year’s Black Friday deal. You’ll get to save 82% on that plan, pay only $1.99 per month, and you’ll get 3 extra months for free!

As you can imagine, ZenMate offers another long-term plan. You’ll pay slightly less for that once, but you’ll get a lot less. That said, let’s compare those two ZenMate plans.

How to Get ZenMate’s Black Friday Deal in 2022

To get ZenMate’s Black Friday 2022 deal, you need to subscribe to the VPN via its website. This is a very short and easy procedure – and here’s how it’s done:

1. Go to ZenMate’s website using your Web browser (on your computer, tablet, or even your smartphone). You’ll see the available subscription plans immediately.

2. Select the 18-month plan, as that’s the ZenMate Black Friday offer that saves you the most. The page will now scroll to the payment step.

3. Choose to pay using your credit card or PayPal, and then enter your email address (you’ll use it later to log in to the app).

4. You’ll now see the final step. Review your subscription details and fill out the required payment information. Once done, ZenMate will instruct you on how to download its apps.

How Much Do You Save on ZenMate’s 18-Month Plan?

You’ll save 82% on ZenMate’s 18-month plan. At the moment, the price of that plan comes down to only $1.99 per month, making ZenMate’s offer very enticing.

Will You Get Extra 3 Months Free on ZenMate’s Black Friday Deal?

Yes, you’ll get 3 months added to your initial billing period. That means you’ll subscribe to the VPN’s 18-month plan, but you’ll use it for the next 21 months.

Don’t forget that you’ll get 3 months free only with ZenMate’s 18-month plan. That’s the only plan included in the ZenMate VPN Black Friday offer.

What’s Included in ZenMate’s 18-Month Plan for This Black Friday?

For this year’s Black Friday, ZenMate’s 18-month plan includes 3 extra months, in addition to a whole slate of the VPN’s standard features. Here’s a quick summary:

Overall, the ZenMate Black Friday offer sounds like an excellent deal. After all, we’re talking about a capable and simple-to-use VPN from comes from a trustworthy brand. You can use it for practically any purpose – and pay only $1.99 per month.

However, don’t forget that this is a time-limited offer. So, if you wish to save 82% on ZenMate VPN, make sure to act on time.

How Long Does the ZenMate Black Friday Sale Last?

The ZenMate Black Friday sale will last until November 25, 2022. However, that same sale will be available through this year’s Cyber Monday as well.

How Long Does the ZenMate Cyber Monday Sale Last?

The ZenMate Cyber Monday sale will last until November 28, 2022. There’s no indication if this sale will extend beyond that date, so act on time.

That’s all when it comes to ZenMate’s Black Friday 2022 promo deal. If you have anything to add, please use the comments section below. Thank you for reading!