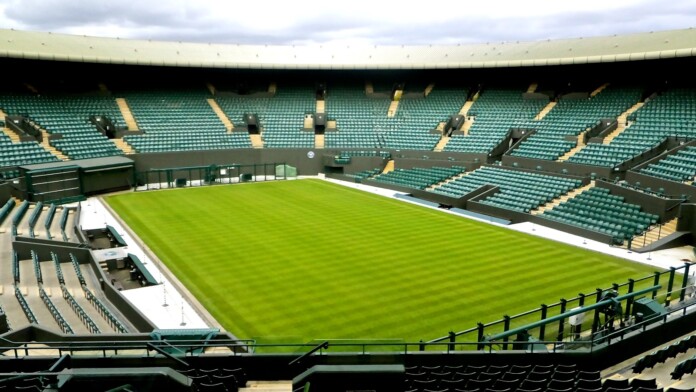 One of the most iconic tennis tournaments is almost upon us as the 2021 Wimbledon Championships take the stage. Tennis fans will be in for a treat as the action heads to England just a few weeks after the thrilling and dramatic French Open. Regarded as one of the most prestigious annual events in the world of tennis, this year’s Wimbledon Championships should be another thrilling grass-court event.

Wimbledon is the oldest tennis tournament in the world and goes all the way back to 1877. It is an event deeply rooted in history and tradition. It is one of the four Grand Slam tournaments in the world of tennis, along with the Australian Open, the French Open, and the US Open. Five main events occur at Wimbledon every year: the men’s singles, women’s singles, men’s doubles, women’s doubles, and mixed doubles.

After the COVID-19 pandemic prevented the Wimbledon Championships from taking place last year, the tournament makes its eagerly-awaited return this year. And here we have all the information you need on how you can watch the tournament live from anywhere in the world without cable.

What Is the Wimbledon 2021 Schedule?

The 134th edition of the Wimbledon Championships kicks off on June 28 and will last for two weeks. And as always, the tournament will end with the Men’s Singles Final – on July 11.

The schedule is always subject to change due to several conditions and possible happenings. You can stay up to date on the schedule, the order of play, the matches, competitors, and more on the official Wimbledon website.

The 2021 Wimbledon Championships will be broadcast live in the United States on ESPN and the Tennis Channel.

Which Players Will Participate in Wimbledon 2021?

As every year, some of the world’s biggest names will participate in the 2021 Wimbledon Championships. Leading the way will be defending champion and 2021 French Open winner Novak Djokovic, who will be aiming to continue his stunning evolution. Simona Halep won the women’s singles title in 2019 and will be one of the favorites to win this year, although she is seeded second behind Australia’s Ashleigh Barty.

Barbora Krejčíková will be another one to watch, having just won the French Open title. All eyes will also be on Serena Williams, as she aims to end her major drought.

On the men’s side of things, Roger Federer will be aiming to challenge Djokovic. While talented up and comers Stefanos Tsitsipas, Daniil Medvedev, Dominic Thiem, and Alexander Zverev will be aiming to finally end the dominance of tennis’ “big three.”

Two big names, Rafael Nadal and Naomi Osaka, will, unfortunately, be missing the event, and their absence will certainly open up the field a little, making it interesting to see who comes out on top.

How to Watch Wimbledon 2021 Online From Anywhere?

If you are traveling away from the US or live elsewhere, you will likely need to get an active VPN subscription to watch the Wimbledon 2021 since the content will be geo-blocked.

We recommend using ExpressVPN, which allows you to mask your real location. It is widely popular and gives you a 49% OFF deal, as well as the option of a 30-day money-back guarantee. These two, plus its reliability and ease of use, make ExpressVPN one of the best VPN subscriptions around.

Getting an ExpressVPN subscription is easy. All you need to do is head to the website, fill out all the details, pay the subscription fee and download the app. Then, select the United States as your virtual location, and you can watch the Wimbledon Championships without any restrictions.

If you want to take a look at other VPN services, here is our list of the 6 best available VPNs.

How to Watch Wimbledon 2021 Without Cable in the US?

First up on our list, we have fuboTV, which is an excellent streaming service that is a must-have for all sports lovers. It offers dozens of dedicated channels as part of its packs, so there’s something for everyone.

You can watch the 2021 Wimbledon Championships live on fuboTV, as both ESPN and Tennis Channel are available as part of the main packs. ESPN is available on all three packs, which are Starter, Pro, and Elite, while Tennis Channel can be purchased with the Fubo Extra and Sports Plus package add-ons.

Another great and widely used platform is Sling TV. It has gained a lot of popularity in recent years, and it is easy to see why. Sling TV has three subscription bundles, Blue, Orange, and Orange + Blue, and ESPN is available on the latter two, while the Tennis Channel can be purchased through the Sports Extra add-on.

Orange and Blue packs cost $35 per month each, and Orange + Blue costs $50 per month and they all have different perks. For more information on Sling TV, you can read our review here.

Another great option to watch live sport is Hulu + Live TV, which gives you access to 60+ channels, and you can also view its On-Demand library of original content. ESPN is included on its list of channels, but unfortunately, the Tennis Channel is not. A monthly subscription to Hulu + Live TV costs $64.99.

We also have another alternative for you, which is the reliable YouTube TV. Considered to be one of the easiest to use, YouTube TV gives you access to a few premium channels. It has a single bundle with 85+ channels that includes ESPN. However, if you want to watch Tennis Channel on YouTube TV, you are unfortunately out of luck. A monthly subscription to YouTube TV costs $64.99. Here is our YouTube TV review.

How to Watch Wimbledon 2021 From Other Countries?

The worldwide popularity of tennis means that the Wimbledon Championships are broadcast in nearly every corner of the world every year. And this year will be no different. So no matter where you live, you can get easy access to the London-based event. Here we have the list of the streaming platforms and TV channels that will broadcast the 2021 Wimbledon Championships live in select countries.