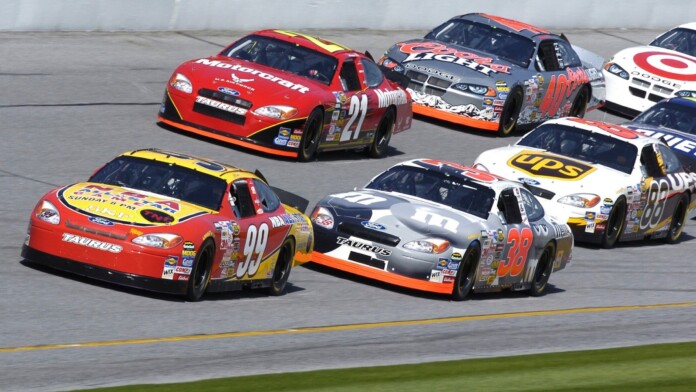 The racing season is upon us, and NASCAR fans across the United States can rejoice and go head and figure out how they’re going to watch all these races online. We’re going to watch NASCAR online and think that you should join us because it’s the best way to do it.

The 2020 NASCAR Cup Series is the seventh second season for professional stock car racing in the United States. The series kicked off with the bush clash at the Daytona International Speedway on February 9th, and it will conclude on November 8th.

After rejecting Monster Energy’s offer to extend its title sponsorship, NASCAR will enter a new “era” under a tiered sponsorship model, with Busch Beer, Coca-Cola, GEICO, and Xfinity as the premier partners.

When and Where to Watch NASCAR Cup Series?

The broadcasting rights for the NASCAR cup series are split between multiple networks, namely Fox, FS1, NBC, and NBC Sports. When NBC networks cover events, you can also watch the race on NBC Sports Gold. (Note: You need to be aware of the fact that NBC, NBCSN, Fox, and FS1 are cast in select markets only, so if you live in an area where you do not get coverage for these channels you will need to use a VPN to connect to a server that is located in a different city, where the channels are available. Click here to find out how you can start using a VPN.)

Here’s the schedule for this year’s races along with the channels that have broadcasting rights:

How Can I Live Stream NASCAR Cup Series?

One of the really good news about the NASCAR Cup Series is that the races are covered by so many networks, which means that you will be able to watch the show on several platforms that provide live TV coverage without a cable subscription. In fact, we can recommend using Hulu, which is a really cool platform that has a single bundle of channels where you will find everything you need: Fox, FS1, NBC, NBC Sports. Start your 7-day free trial on Hulu today!

As mentioned, there is a single bundle of channels available on Hulu, but you can add a couple of channel packs and several premium networks if you’re really looking for more content to enjoy. The really cool thing about subscribing to Hulu’s live TV service is that you will also get to enjoy everything that is available on the on-demand library that Hulu’s been building for many years. Hulu’s apps work on many devices, including iOS and Android phones and tablets, Apple TV, Android TV, Fire TV, Chromecast, Roku, and more. Note: If you are unable to access outside the United States then follow the guide below.

Here’s how you can sign up for Hulu’s live TV service:

Other Ways to Watch the NASCAR Cup Series

fuboTV – Another platform that is home to Fox, FS1, NBC, and NBC Sports is fuboTV, which is a really cool single bundle service that particularly caters to sports fans. If you want even more content, you can get it by adding extra channel packs and premium networks. Start your 7-day free trial on fuboTV today!

Sling TV – Another service that is home to all the networks you need in order to watch NASCAR races is Sling TV, which comes with three bundles to choose from. All the channels above that have broadcasting rights for the NASCAR races are featured in only two of these, namely Blue and Orange + Blue. Your choice in bundles will dictate the number of devices you can watch content simultaneously on, with Blue subscribers getting access to three simultaneous streams, and Orange + Blue subscribers getting access to four of them. Start your Sling TV subscription by saving money on your first month! If you want even more content, you can get it by adding any of the available extra channel packs or premium networks.

NBC Sports Gold – For all those races that are scheduled in the second half of the year, you’ll have NBC Sports Gold as an option. This service is not one you have to pay a base subscription for, as setting up an account is free. You can add, however, passes to watch your favorite sports, and they’ll each cost you separately. In order to watch the NASCAR season, you’ll have to get the Trackpass, which costs $4.99 per month or $44.99 for the full season. It’s not just NASCAR that comes included with this feature, but also American Flat Track and IMSA. If you only want NASCAR, then you can go ahead and only pay $2.99 per month or $19.99 per year. The races that are scheduled to be covered by Fox and/or FS1 will be available on-demand, while the other ones, where Fox Sports Gold appears as an option, are going to be available live. You can learn more about their coverage here.

How Can I Watch the NASCAR Cup Series When Traveling Outside of the United States?

Traveling the world is super fun and provides you with the chance to learn a lot about the world around us, but it’ll also be quite taxing on you if you don’t keep in mind that live TV platforms and streaming services like the ones we discussed are not accessible everywhere in the world. This happens because all these channels have licensing deals, and they cannot allow the live TV platforms to stream content beyond US borders. The companies themselves cannot do much to help you overcome the blockade, but there is something that you can do yourself, namely, to change your IP address.

In order to do this, you will need a VPN that can do this job for you in under a minute. If you don’t know which VPN to use, we can recommend ExpressVPN, which is a really cool tool that has thousands of servers all over the world and some really great privacy features that will help protect your data.

Here’s how you can use ExpressVPN to watch NASCAR anywhere in the world:

Can I Watch the NASCAR Cup Series on the Network’s Website?

Well, in our case, there are multiple networks to consider, and the answer is pretty much yes, regardless of which one will cover the event you want to watch. Fox, FS1, NBC, and NBC Sports come with live streams that you can enjoy on the website. In order to do this, however, you will need to log in to an account by using credentials from your TV provider. These credentials can come from a live TV service like the ones we discussed or a cable company if you haven’t cut the cord yet.

Note: When traveling outside of the United States, you need to be aware of the fact that these live streams are all geo-blocked, which means that you cannot access them if you are not in the United States. Click here to learn how you can use a VPN to solve the problem.

Can I Watch the 2020 NASCAR Cup Series with a TV Antenna?

Well, it depends on which network is covering the race. If the race is covered by Fox or NBC, then you will be able to enjoy the race with an antenna. Both channels continue to broadcast over-the-air in certain areas, so we think that you should check a site like NoCable to figure out whether or not you’ll be able to use an antenna in your specific region. You will also find out more details about how far the broadcast stations are so you can figure out what range do you need your device to have.

Make sure to also check these TV antennas we listed above in case any of them have the right features for your household so you can enjoy as many networks as possible for free. After all, these devices are relatively cheap, and they enable you to watch dozens of networks locally.

How Can I Watch NASCAR in Other Countries?

NASCAR can be enjoyed all over the world, although the options are not nearly as expensive as they are in the United States. Here are a few options for those living in other countries: