How to Watch The Quest on Disney Plus 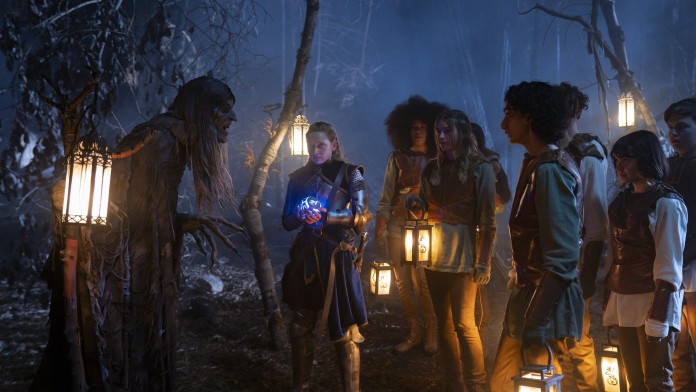 Pack your bags and swords, we're headed to Everealm again. This time, eight teenagers as they embark on a special journey to a world of fantasy in The Quest. We have all the information you may need, including the release date and the number of episodes, and it will be very easy to watch it all online. This being said, let's see when, where, and how to watch The Quest online from anywhere.

The Quest is a ground-breaking, immersive, hybrid competition series that drops eight real-life teenagers (Paladins) into the fantastic, fictional world of Everealm, where they must save a Kingdom by fulfilling an ancient prophecy. Throughout the series, these heroes are immersed in a fantasy world that comes to life complete with a castle, royals, ethereal Fates, all forms of mystical creatures, and a Sorceress intent on destruction and power.

We will see Emily Gateley as Mila, Braeden De La Garza as Prince Emmett, Racquel Jean-Louis as Princess Adaline, Elliott Ross as Prince Cederic, Harry Aspinwall as Dravus, Mel Mehrabian as
Sorceress Tavora, and Kerwin Thompson as King Silas, among others. Brought to the screen by the Academy Award- and Emmy-winning teams behind The Amazing Race and The Lord of the Rings.

The Quest will premiere on Wednesday, May 11, 2022, on the Disney Plus streaming service. The series was announced to have eight episodes. We should expect to get one episode each week. As it usually happens with new content on streaming platforms, this title will become available sometime after midnight PT (03:01 am ET).

How to Watch The Quest on Disney Plus

This new and exciting title is a Disney original series, so we will be able to watch The Quest on Disney's streaming platform. All you have to do is subscribe to the Disney Plus service for a moderate monthly fee, and you will be able to do that in the countries where the streaming platform launched, including the US, the UK, Canada, and Australia.

The subscription price offers access to the entire library, which hosts various titles from Disney, Marvel, Star Wars, Pixar, and The Simpsons, among others, besides National Geographic titles.

If you live in the US, you have another great option besides subscribing to Disney Plus as a standalone service since American customers can get the Disney Plus, ESPN Plus, and Hulu bundle and save 25% compared to the monthly cost of subscribing to all three services separately. If this bundle seems like a choice that better suits your needs, know that you can choose between Hulu with commercials for $13.99 per month or Hulu (No Ads) for $19.99 per month.

The Disney Plus platform is compatible with mobile devices and tablets, both iOS and Android, Smart TVs, gaming consoles, and more - and you can check the full list here. Also, Disney Plus is expanding to other countries, so fans will be able to watch it in more territories starting this summer.

However, keep in mind that the Disney Plus streaming service is not available everywhere, so you may not be able to access some titles or the entire platform while traveling due to geo-restrictions they have in place.

Can I Watch The Quest for Free?

There are a few other ways to watch The Quest on Disney Plus for free, even though there is no free trial available on Disney's streaming platform right now.

You can take advantage of a very extensive free trial if you're a Verizon subscriber with select Unlimited plans (or if you upgrade to Unlimited), as the telco offers six months of free Disney Plus for eligible new and existing customers. You will be charged the standard price for a standalone Disney Plus subscription on the streaming platform after the free trial ends, which is $7.99 per month. However, Verizon also offers The Disney Bundle for Unlimited subscribers, but this one does not have a free trial, so be careful what you choose.

There are also on-and-off promotions that include the service for free with Amazon Music Unlimited or Xbox Game Pass Ultimate, so you should check those services if the deals become available again.

The Quest Trailer Disney Plus