How to Watch Sky High Club: Scotland and Beyond Online From Anywhere 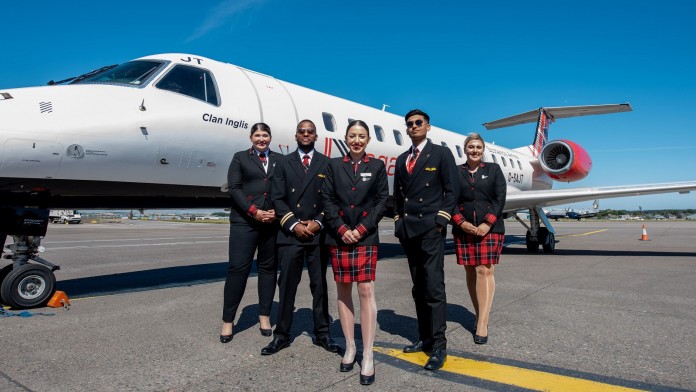 The show that tells the stories of the young crew members of the UK's largest regional airline will premiere soon, and we will be able to easily stream all the episodes online, just like we all do nowadays. You will find the premiere date, plot, episode release schedule, and the streaming platform that hosts it below, so let's see when, where, and how to watch Sky High Club: Scotland and Beyond online from anywhere in the world.

Flying high above the skies of Scotland, meet the young crew of the UK’s largest regional airline. Prepare to take off with the pilots, cabin crew, and engineers who are buckling their belts for their busiest summer yet. The opening episode introduces the Loganair team, including pilots and cabin crew, who are buckling their belts for journeys across Scotland and beyond in their busiest summer yet.

In the debuting episode, we meet Robbie, the youngest pilot to become a captain in the UK. Now 25, he has the dream job and the dream girl, but there is one small problem: he lives in Edinburgh, and she lives in Shetland. Luckily for him, good pals Shannon and Karolina are on hand to organize a team day out and offer some solid advice on long-distance relationships. We also meet Omar, who has moved from Spain to start a new life in Scotland. He is training to become a cabin crew member. Having packed up his whole life to move here, he is stressed about passing the airline's grueling fire and safety exams or risk moving home again.

The series also features James, the first newly qualified pilot in the UK and Europe living with HIV, cabin crew Shannon, Karolina, and Alannah, best mates Kuda and Dean as they are settling into their new lives as pilots in Aberdeen, and Stefano, one of the youngest pilots in the airline, among others.

The Sky High Club: Scotland and Beyond series will premiere on Monday, August 15, 2022. It will be broadcast on BBC Scotland at 10:30 pm local time, as well as BBC Three on Thursday, August 18, at 8 pm, and the show has 10 parts that you will be able to stream via the BBC iPlayer streaming platform soon after their premiere. Each episode is 30 minutes long, and we will get 2 episodes every week - the episodes that premiere Mondays and Wednesdays on BBC Scotland will air back to back on Thursdays on BBC three.

How to Watch Sky High Club: Scotland and Beyond Online From Anywhere

Nowadays, there are a lot of streaming platforms available in your home country that let you easily stream your favorite movies and series online. However, these services block your access when you are traveling abroad or even to other states because these services have geo-restrictions in place due to licensing agreements. You can forget about this small setback if you watch Sky High Club: Scotland and Beyond online with a VPN tool since a VPN can unblock streaming services by changing your IP address and making it seem you are back home.

We recommend you turn to ExpressVPN to easily unblock several popular streaming platforms, such as BBC iPlayer, Netflix, Hulu, Amazon Prime Video, and others. This VPN is the best tool and the most popular on the market right now, and it's extremely easy to use, even for beginners. Courtesy of its generous 30-day no-questions-asked money-back guarantee, you can try ExpressVPN for 30 days RISK-FREE and enjoy fast and stable connections and strong encryption protocols to protect your data online.

You need to create an account, so head to the company's website to get started. To enjoy a significant discount, select the annual plan when you subscribe to ExpressVPN (49% discount and 3 months FREE). Provide the requested information, see the payment through, then download and install the native app made for your device or system. Once that's done, open the VPN app and turn it on after selecting a server from an area back home. Finally, since the geo-blocks are removed, load the streaming platform to watch Sky High Club: Scotland and Beyond online from anywhere.

How to Watch Sky High Club: Scotland and Beyond Online in the UK

The Sky High Club: Scotland and Beyond series will air on BBC Scotland on August 15 at 10:30 pm and on BBC Three on August 18 at 8 pm local time, and this means the title will also be available to stream on the BBC iPlayer service. BBC's streaming service lets you watch free of charge, and you just need to have or create a free account to do so since an account will let you access content on this streaming platform instantly. You will also find other famous BBC shows on this platform, such as Gentleman Jack, Peaky Blinders, Eastenders, or MasterChef.

If you're a Sky TV customer, you will be able to see the Scottish show here as well, as the first episode will become available on August 16 at 12:30 am. Subscription prices for Sky TV start at £26 per month, and you get a 10-day free trial if you're a new customer.

The BBC iPlayer platform is only available in the United Kingdom, so you will need to use a safe and capable VPN to unblock BBC iPlayer from anywhere and access it when traveling outside your home country. Just switch it on using a server from a location back home before accessing the platform.

Can I Watch Sky High Club: Scotland and Beyond Online in the US, Canada, and Australia?

You may already know not all UK shows make it to other countries. Unfortunately, you won't be able to watch Sky High Club: Scotland and Beyond if you live outside the UK since there's no official streamer announced to host this title for the US, Canada, and Australia.

We have no information regarding the possible release date or services that would host this movie in the near future outside the UK, but you can still watch it on BBC iPlayer using a VPN. We recommend you read our dedicated article on how to watch BBC iPlayer outside the UK for more details.