How to Watch Fantasy Football Online From Anywhere: Stream the Kelly Rowland 2022 Movie 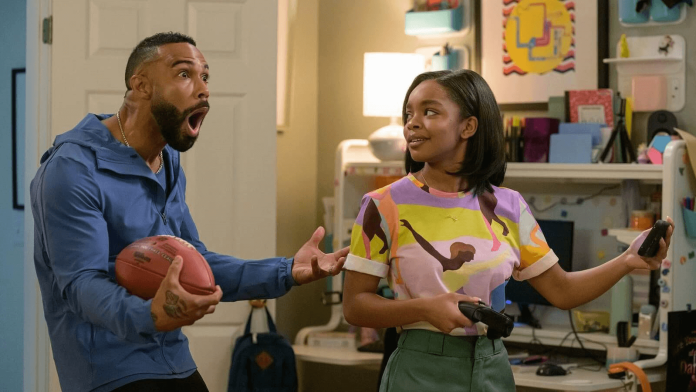 Fantasy Football fans will be happy to know there is a new movie premiering this year that has this awesome theme, and you will be able to stream it online quite easily. We have all the important details on this title, including the premiere date, cast, and plot, so keep reading to find out all there is to know about it.

The plot of this family comedy movie follows Callie Coleman, a football fanatic and robotic wizkid who discovers she can magically control her NFL star dad Bobby Coleman through EA SPORTS Madden NFL 23. Throughout the movie, she finds that keeping their secret is harder than they think! Keisha Coleman is her mother and Bobby's wife, who not only supports her husband's football career and dissuades his in-house competition with his teammate Anderson Fisher but is Callie's cheerleader when it comes to her genius interests in not only her Madden video game but her high school robotics team.

This being said, let's see when, where, and how to effortlessly watch Fantasy Football online from anywhere you may be, even on the go or while traveling abroad.

When and Where to Watch Fantasy Football

The Fantasy Football movie will be streaming exclusively on the Paramount Plus platform on Friday, November 25, 2022 (available in Australia, the UK, Canada, the US, and more). New content usually becomes available to watch on streaming services right after 3 am ET (midnight PT).

How to Watch Fantasy Football Online From Anywhere

The many live TV and streaming services out there nowadays let you stream content online, but you may not be able to access your library while traveling due to the geo-restrictions these have. This is also the case with Paramount Plus, which is only available in the US, the UK, Australia, Italy, Latin America, the Middle East (as a pay TV channel), and the Nordics. However, you can undo this blockade if you use a VPN subscription to watch Fantasy Football online, as a VPN will help you change your IP address and trick the platform into not displaying the geo-fencing overlay.

A great option when it comes to easily unblocking streaming platforms is ExpressVPN, which has thousands of servers in 90+ countries all over the world and instantly works with Paramount Plus, Amazon Prime Video, Netflix, Hulu, and more. This is one of the best VPNs on the market right now; it's secure, fast, compatible with a ton of devices, and has the best privacy features out there. The 30-day money-back guarantee lets you virtually try ExpressVPN for 30 days RISK-FREE.

Start by creating an account, which only takes a few minutes. The annual plan comes with a huge discount when you subscribe to ExpressVPN (49% discount & get 3 months FREE) on the company's website. First, enter the required information and see the payment through, then download the app made for your device or system. Once the installation is complete, launch and run your VPN app via a US server located where the platform is not geo-restricted. Lastly, load the streaming service to watch Fantasy Football online.

How to Watch Fantasy Football Online Without Cable in the US

This title is a new Paramount Plus Original movie, so you will be able to stream it via a subscription with the Paramount Plus service. Prices start at $4.99 per month with the ad-supported Essential plan, and you can select the no-ads Premium tier for $9.99 a month. You'll also get a nice 7-day free trial if you're new to the service.

You can also bundle up and save some money with the Paramount Plus and Showtime bundle starting at $7.99 per month with the ad-supported version. You will get a 7-day free trial for this bundle as well.

Moreover, you can add Paramount Plus on the Amazon Prime Video platform as a Prime Channel for $9.99 per month on top of the $14.99 per month Prime membership fee. The channel is the no-ads version and includes a 7-day free trial if it's the first time you add it. Prime itself offers a generous 30-day free trial for new customers.

Traveling away from the US? This service is geo-blocked abroad due to licensing deals, so you won't be able to access it unless you rely on a subscription to a powerful VPN tool set to a server located back home. Just turn on the tool before opening Paramount Plus to stream this title.

How to Watch Fantasy Football Online in Canada, the UK, and Australia

The 2022 Fantasy Football movie will premiere in Canada on the same day in the US and on the next day in the UK and Australia via the Paramount Plus streaming platform. Subscription plan prices start at CA $5.99 / £6.99 / AU $8.99 per month, and you can either create an account or log in with a partner's credentials, such as through Apple TV, using your Apple ID. There's also a 7-day free trial for new customers.

Just remember this streaming service is geo-restricted. If you cannot see this title while traveling abroad, a trustworthy VPN will help you unblock the platform as long as you run the app using a server located back home.