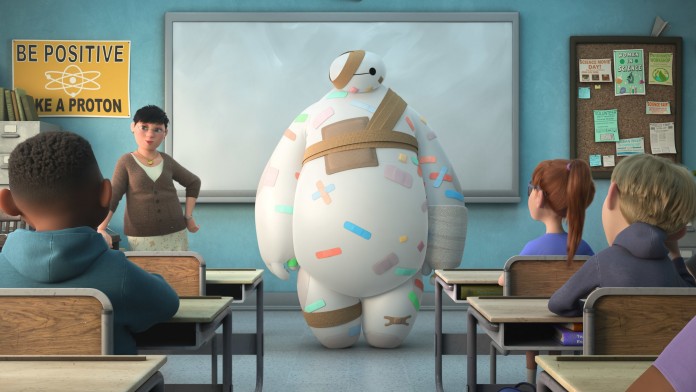 Big Hero 6 fans will be happy to know there's only a little time left until the new series focusing on Baymax premieres, and you will be able to stream all the episodes online on the go and at home quite easily. We have all the information you may need, including the release date and plot, so let's see when, where, and how to watch Baymax! online on Disney Plus.

Big Hero 6's Baymax now has his own dedicated new Disney Plus original series. The story will follow everyone's favorite healthcare bot in the fantastical city of San Fransokyo and is created by the Oscar-winning director of Big Hero 6. It is also Walt Disney Animation Studios' first-ever animated series. The all-new series of healthcare capers returns to the fantastical city of San Fransokyo where the affable, inflatable, inimitable healthcare companion robot Baymax sets out to do what he was programmed to do: help others.

“I thought it would be fun to do a Disney+ series with Baymax interacting with normal folks. In each of our six episodes, Baymax just wants to help someone—and a lot of times they don’t want to be helped. He sets out to fix a physical issue that he's identified, and in the process, gets to a deeper, more emotional place and can be almost transformative in that role,” said series creator Don Hall, who helmed 2014’s Oscar-winning film Big Hero 6.

Baymax! is produced by Roy Conli and Bradford Simonsen, and the series’ episodes are directed by Dean Wellins (Eps 1, 2, 6), Lissa Treiman (Ep 3), Dan Abraham (Ep 4), and Mark Kennedy (Ep 5). The screenwriter is Cirocco Dunlap. Scott Adsit returns as the voice of Baymax, and other voice talents featured in episodes include Ryan Potter as Hiro Hamada, Maya Rudolph as Aunt Cass, Emily Kuroda, Lilimar, Zeno Robinson as Ali, and Jaboukie Young-White.

The Baymax! series is set to premiere soon, and you will be able to stream it exclusively on Disney Plus starting on Wednesday, June 29, 2022. This season is expected to have six episodes that will premiere on a one-per-week schedule. As it usually happens with new content on streaming services, this title will become available on the platform sometime after midnight PT (03:01 am ET). This is just one of the many Disney Plus originals slated for this year, and you can check the full list here.

How to Watch Baymax! Online on Disney Plus in the US, the UK, Canada, Australia, and Anywhere in the World

The Baymax series is a Disney original title, so we will be able to watch this title on Disney's streaming service in the countries where the streaming platform launched, including the US, the UK, Canada, and Australia. The subscription price includes full access to the platform's library, which hosts several Star Wars titles and various titles from Disney, Marvel, Pixar, and The Simpsons, among others, besides National Geographic content.

The Disney Plus platform is compatible with mobile devices and tablets, both iOS and Android, Smart TVs, gaming consoles, and more (you can check the full list here).

If you live in the United States, we have a great deal in the form of the opportunity to bundle up three services. Besides subscribing to Disney Plus as a standalone service, American customers can get the Disney Plus, ESPN Plus, and Hulu bundle and save 25% compared to the monthly cost of subscribing to all three services separately. If The Disney Bundle seems like it suits you better, know that you can choose between Hulu (ad-supported) for $13.99 per month or Hulu (No Ads) for $19.99 per month.

However, it's important to keep in mind that you may not be able to access some titles in the library in some countries while traveling due to the geo-restrictions. However, geo-blocks applied in the countries where the platform is not available yet will restrict your access to the entire Disney Plus streaming service.

Can I Watch Baymax! for Free?

There are a few ways to watch the Baymax series on Disney Plus for free, even though a Disney Plus free trial is not one of them.

You can take advantage of a very extensive Disney Plus free trial if you're a Verizon subscriber with select Unlimited plans (or if you upgrade to Unlimited), considering the telco offers six months of free Disney Plus for eligible new and existing customers. You will be charged $7.99 per month after the free trial ends, which is the standard price for a standalone Disney Plus subscription on the streaming platform. Even though Verizon offers The Disney Bundle for Unlimited subscribers as well, this one does not have a free trial.

We recommend you check a couple of services that have on-and-off deals that include Disney Plus for free to see if the deals become available again, and we are talking about Amazon Music Unlimited or Xbox Game Pass Ultimate.