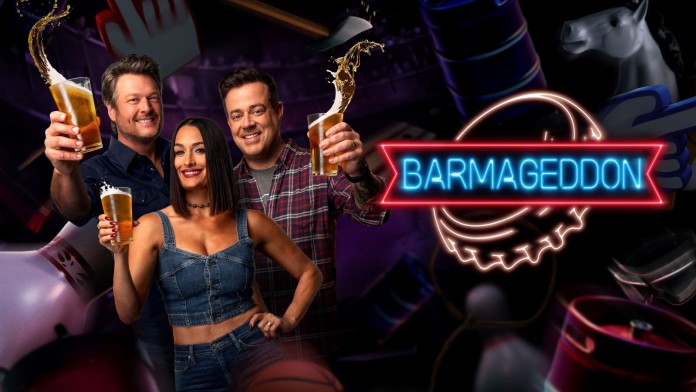 This December, get ready to be entertained by the latest upcoming celebrity game show, Barmageddon. The great news is that you will get the chance to stream it online from the comfort of your couch or watch it online from anywhere if you're traveling.

Barmageddon is a bar-themed game show hosted by WWE Hall of Famer Nikki Bella. It follows award-winning country singer Blake Shelton and television host Carson Daly, as they open the doors to the Nashville-based bar Ole Red to welcome a rowdy crowd for live music sing-alongs and well-loved bar games, with a twist! With Daly behind the bar and Shelton on stage, Bella will keep the competition fierce and raise the stakes as celebrity friends go head-to-head in games such as Air Cannon Cornhole, Keg Curling, Drunken Axe Hole, Sharts ("Shelton Darts"), and many more.

Sounds good? Well, keep reading to find out where, when, and how to watch Barmageddon online from anywhere in the world.

When and Where to Watch Barmageddon

Barmageddon premiered on Monday, December 5, 2022, on the USA Network in the US at 11:00 p.m. ET. The 8-episode game show will air new episodes every Monday.

How to Watch Barmageddon Online from Anywhere

With a subscription to your favorite streaming platform, you can easily watch content online from anywhere in the world. For example, if you live in the US, you can easily watch the game show on the USA Network. However, there are limitations to watching content from streaming services everywhere due to geo-restrictions in countries abroad, but there is a simple solution to this. You can use a VPN to watch Barmageddon online since it allows you to bypass geo-restrictions by hiding your IP address and replacing it with one that shows you're located back home.

If you're searching for a VPN, our recommendation is ExpressVPN, which easily unblocks most streaming platforms, including HBO Max, Netflix, Amazon Prime Video, Hulu, and Paramount+. It is one of the best VPNs you can use, with thousands of servers in over 90 countries, unlimited bandwidth, and 24/7 live chat support. Take advantage of this opportunity to try ExpressVPN for 30-days RISK-FREE with a no-questions-asked money-back guarantee.

Additionally, if you're looking for a bargain, you can visit their website and subscribe to ExpressVPN (49% Discount and get 3 months FREE). Simply provide your personal details, complete your transaction, and download the app best suited to your device. Once installation is complete, launch the app, select a server located in your home country, and turn it on. By doing so, you can access the streaming platform to watch Barmageddon online from anywhere.

How to Watch Barmageddon Online in the US Without Cable

Since the new gaming show will air in the US on the USA Network, US residents can stream Barmageddon online on the USA Network website by using their NBCUniversal or TV provider credentials and through streaming services and live TV.

Here are some of the streaming services you can use:

If you are traveling outside the US, we recommend you use a VPN to watch Barmageddon on USA Network. You can easily accomplish this by selecting a server located in the US and switching it on. That's all you need to access the streaming platform from anywhere in the world.

How to Watch Barmageddon Online in the UK, Canada, and Australia

No official release date has been set for Barmageddon in the UK, Canada, and Australia, but we expect that the game show will be available in these countries once it's released in the US. Since the series will be available on USA Network, it's possible that it will be added to NBC's streaming service, Peacock, which is available to subscribers with the Entertainment Pass membership of Sky's streaming service NOW TV at no extra cost in the UK. The subscription costs £9.99 per month, with a 7-day free trial for all new subscribers.

Furthermore, the good news is that you can still use a trustworthy VPN to access this title in the UK, Canada, and Australia when it premieres. Simply connect to a server in the US and turn on the VPN to start watching.