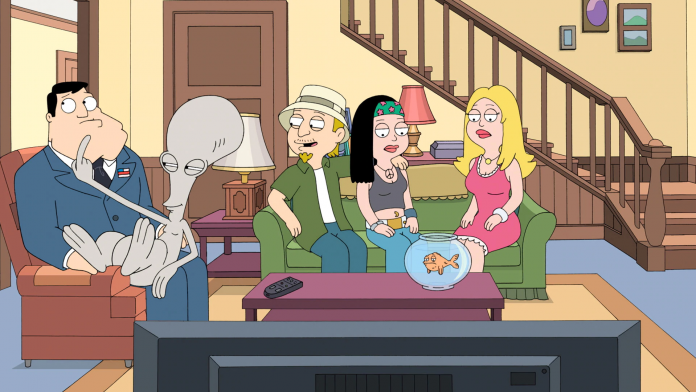 The American Dad animated series keeps going strong despite the rumors and the haters, and its fanbase is excited to watch the Season 17 premiere soon. We should mention that there's some arguing regarding the season numbering discrepancies on the internet, as some see Season 17 as being Season 19. You'll find all the details for the latest season of the series below, so let's see how to watch American Dad Season 17 online from anywhere.

The first episode of American Dad Season 17 is called Langley Dollar Listings, and it will premiere on Monday, January 24, 2022, in the US. You will be able to watch the series on the TBS network at 10 PM ET. We know that American Dad's 17th season will have 22 episodes, and we'll get one episode per week. So far, only the first three episodes of the season have been announced: besides the premiere, Dressed Down airs on January 31 and The Book of Fischer on February 7, so we'll have to wait and see when the season finale is going to occur.

So if you missed super patriotic CIA agent Stan Smith (voiced by MacFarlane) and the misadventures of his unconventional family in Langley Falls, VA, get ready to giggle once more. Maybe this will be the season that will finally reveal our favorite sassy alien's birth planet, as Roger (MacFarlane) is the most special member of this odd family.

The American animated sitcom created by Seth MacFarlane, Mike Barker, and Matt Weitzman was also renewed for seasons 18 and 19, so we have a lot to look forward to.

First of all, you need to have a subscription with a live TV and streaming service that has American Dad or TBS in its offer. Next, since the streaming services are geo-blocked due to licensing deals, you will need to add a VPN subscription on top. This will let you change your local IP to your home IP while traveling, so you will be able to watch it online from anywhere.

If you don't know what to choose, we recommend you go for ExpressVPN since it's one of the best tools out there and has thousands of servers all over the world. It's really popular, fast, trustworthy, extremely easy to use even for novices, and most importantly, it works. This VPN is powerful enough to let you unblock almost all of the streaming services, such as Hulu, Amazon, BBC iPlayer, and more.

All you have to do is subscribe to ExpressVPN (49% OFF and 3 months FREE), select the plan you desire, pay, and install the app for your device. Once it's done, open the VPN and select a server located in your country. Only then open the live TV platform you are subscribed to and tune in to TBS when it airs. You should remember that there's a 30-day money-back guarantee available here if you feel this tool does not suit you.

How to Watch American Dad Season 17 in the US

In the USA, American Dad Season 17 launches on TBS, so you can always access this channel through a live TV service such as Hulu + Live TV, Sling TV, and YouTubeTV. If you're traveling away from the US, you can still access these services as long as you use a VPN simultaneously. For details, read the segment above.

Right now, the best way to watch American Dad on TBS is through the Hulu + Live TV service. It starts at $69.99 per month, and the service currently includes ESPN Plus and Disney Plus as a deal bundle. If we also mention that it offers the Live TV library together with the Hulu On-Demand library, it definitely sounds like a whole lot to get more for your money.

Unfortunately, the free trial is unavailable for this service as long as the deal mentioned above stands. You can find all the perks and options in our Hulu + Live TV review.

You can definitely stream American Dad Season 17 on TBS using Sling TV. This service has better prices than its other competitors on the market, and you can find TBS in all of its three channel packs - Orange ($35 per month), Blue ($35 per month), and Orange + Blue ($50 per month). It also has several add-ons and premium channels if you want to customize your subscription.

Among the perks this service offers is a 3-day free trial, and you can read more about it in our Sling TV review.

There is a single pack that lets you watch live TV from more than 85 channels for $64.99 a month on YouTube TV. TBS is on the channel list, so you can tune in and watch the episodes of American Dad Season 17 when they air.

We should mention that you also get a few perks for the money, and it has a few customization options such as premium channels and add-ons. For more information, you can read our YouTube TV review.

You can also watch American Dad Season 17 live online if you subscribe to DirecTV Stream since it hosts TBS in all its plans. You can choose from four plan options on this streaming service: Entertainment, Choice, Ultimate, and Premier, and their monthly subscription fee ranges between $69.99 and $139.

How to Watch American Dad Season 17 in the UK & Ireland

American Dad fans in the UK and Ireland will be able to stream Season 17 through a Disney Plus account, and all the other seasons are already available in its library. All you need to do is to subscribe to Disney Plus as a standalone service for £7.99 per month or £79.90 per year. It includes Disney, Pixar, Marvel, Star Wars, National Geographic, and STAR content.

After you get an account with the streaming service, you can watch each episode on-demand on your devices after the time of its launching on the platform.

How to Watch American Dad Season 17 in Canada

If you live in Canada, it's pretty easy to watch American Dad Season 17. The only thing you need to stream it is a Disney Plus subscription, and you also get all the previous seasons, which are already available in its library. This platform offers titles under the Disney, Pixar, Marvel, Star Wars, National Geographic, and STAR umbrella and costs $11.99 per month or $119.99 per year.

Once you subscribe, you will be able to access and play each episode on-demand on all your compatible devices after the time it premieres on the streaming service.

How to Watch American Dad Season 17 in Australia

Right now, you can watch American Dad Season 17 in Australia by streaming the series on Disney Plus. For that, you first need to subscribe to Disney Plus for $11.99 per month or $119.99 annually. For this subscription fee, you get Disney, Pixar, Star Wars, Marvel, and National Geographic content, and you will also enjoy STAR as part of your Disney Plus subscription.

Disney Plus is compatible with several devices, so you will be able to access each episode on-demand on all your compatible devices after it premieres on the platform.

This was all on how to watch American Dad Season 17 online without cable, so we hope we've answered all your questions. Use the button below to post a comment if you have anything else to add or ask. Thank you for visiting TechNadu!

Another story from the Star Wars universe will soon unfold as a stunning and exciting spin-off focusing on Obi-Wan Kenobi this time....
Read more
Streaming

How to Watch Emergency Online From Anywhere: Stream the Carey Williams-Directed Movie

We have a new movie that premieres in theaters and on streaming services in the same time period, so we're happy to...
Read more
Streaming

How to Watch We Feed People on Disney Plus: Stream the Documentary by Oscar-Winning Director Ron Howard