How to Set Up Dual Monitors For Gaming 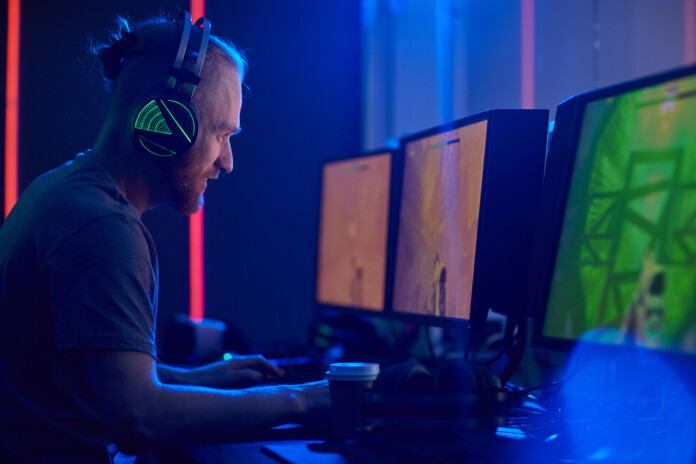 Since LED monitors are relatively cheap nowadays, it’s actually quite common for people to hook up more than one display to their computers. There are many benefits that come along with having two or more monitors side-by-side, but it depends on what you are planning to use them for.

In the case of gaming, dual monitor setups also have multiple purposes. Here are some of the situations where dual monitors make sense:

What Are the Benefits of a Dual Monitor Setup?

Having one extra monitor can be a godsend for many gamers, but that depends on your daily routine. Here are some benefits that come along with an additional display:

What Are the Drawbacks of a Dual Monitor Setup?

Not everything is perfect about this kind of setup, unfortunately, especially for gamers. Hence, there are some inconveniences you have to make peace with if you are planning to buy two monitors.

How to Choose the Monitors For Your Setup

With all that out of the way, it’s time to talk about how to choose your monitors for a proper setup. In theory, you can actually pick any two monitors and pair them together, because they will still work. However, having a 24” display next to a 32” one doesn’t look very pretty, and it’s also basically impossible to play anything on both of them at the same time.

How to Set Up Your Dual Monitors

Things get a bit tricky here because the process of setting up the monitors can depend on your GPU. However, you can definitely achieve this using the Windows settings alone, so it’s not mandatory to use Nvidia or AMD utilities.

Setting Up Two Monitors Using the Display Settings in Windows

Windows allows you to quickly set up your displays using the built-in "Display Settings" utility. However, you should know that these steps may vary depending on your Windows version. Not only that, but older versions may not have this functionality at all. The instructions below work on Windows 10.

If you have an Nvidia GPU you can also set up your monitors using the Nvidia Control Panel. The results are not in any way different than what you get if you use the default Windows tools, so it’s really up to your preferences.

In case you own an AMD GPU, the process of setting up two monitors can also be achieved using the proprietary Eyefinity tool that’s part of the AMD driver suite.

Things You Should Know About Gaming On Dual Monitor Setups

After you manage to get everything working properly you can jump straight into your games and start playing, right? Well, almost. There are some things you should be aware of, especially if you want to avoid glitches or other annoyances.

To begin with, if you are only using one monitor for gaming and the second one for other things, then it’s important to go into the game’s settings and choose the “Borderless Window” rendering mode instead of “Fullscreen”. This allows you to quickly switch tabs and interact with apps on your secondary monitor without Windows minimizing your game every time you click on something.

If you want to use both monitors at the same time for your games, the trick is to either configure your displays to be detected as one (usually only possible using software like Nvidia Control Panel or AMD Eyefinity), or by changing the rendering mode to “Windowed”. That way you can manually resize the game window to fit both of your monitors.

However, you should know that many games are actually not very friendly with ultrawide aspect ratios, especially when it comes to the HUD. Hence, certain interface elements will be either stretched into an ugly mess, or they will simply stop scaling past a certain point and they will be too small to be useful.

Dual Monitors for Gaming - Is It Worth It?

The answer to this depends on your day-to-day routine. If you want to use two monitors as a single display, then no, it's definitely not worth it. A triple monitor setup is much better, mainly because you can avoid the crosshair problem. However, it's definitely worth it if you want to use one monitor for gaming and the other for other things - like keeping an eye on your streaming software, or to watch movies.

What to Choose Between a Single Ultrawide and Two Regular Monitors?

Again, the answer depends on what how you want to use the monitors. From a pure gaming experience, an ultrawide is much better and more immersive. However, you cannot multitask while gaming on an ultrawide, because you have to Alt-Tab in order to check up on your other apps. Hence, you should consider the pros and cons of both setups before making a decision.

How Many Games Support Multi-Monitor Setups?

There are hundreds of games that support two or more monitors, so you do not have to worry about this aspect. Granted, many older games may not work properly, while others may require some tweaking in order to avoid glitches.

Do You Need a Powerful PC to Use a Dual Monitor Setup?

Not necessarily. If you just want to use a single monitor for gaming and the other for multitasking, then it's really not that taxing on your system. However, stretching the games across both monitors will make it significantly harder for your GPU to keep up. Thankfully, at least this problem is easily solved in a dual monitor setup by switching to one display instead of two. This issue is much harder to deal with on ultrawide monitors.

What If One Monitor Has G-Sync/FreeSync and the Other One Doesn't?

This was only an issue back when these technologies were first introduced. Nowadays the bugs have been fixed and it really doesn't matter if you pair a G-Sync monitor with a regular one. Naturally, you will see the difference between them while dragging stuff from one monitor to the other, but that's to be expected.

How Can I Play Games in Fullscreen Mode on a Dual Monitor Setup?

You don't actually have to do anything different in order to play games in the Fullscreen mode on one of your displays. However, having a game in Fullscreen mode means that your cursor won't be able to move from one monitor to the other while playing. This can actually be a good thing in shooters, otherwise you would click on things by mistake when your cursor switches from one monitor to the other.

It's also important to note that, visually, there's no difference between Fullscreen and Borderless Window. Both look the same, but the functionality is different.