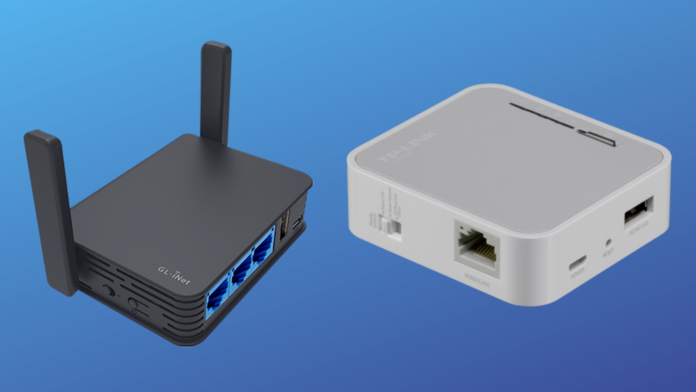 Often, accessing the internet on the go can be a cumbersome process. Mobile data plans are not always cheap, especially while roaming internationally, and hotel Wi-Fi connections come with their own speed and access limitations. This is where a good wireless travel router can help. Wireless travel routers are basically range extenders or access points that enable connecting multiple devices to public Wi-Fi or Ethernet, such as hotels and universities, without much hassle.

A wireless travel router can perform multiple functions, the importance of which include —

Manufacturers also include a few other extra goodies such as a power bank, Wi-Fi bridge, and more. Modern wireless travel routers are not just for travelers and can easily replace your existing router setup at home as well.

While wireless travel routers can prove highly valuable, there are a few points to be kept in mind. Not all wireless travel routers have hotspot functionality, so you need to have some sort of internet connection in the first place before you can use such a router. Also, some routers are known not to play well with captive portals. More importantly, it is always recommended to avoid sharing sensitive information over public Wi-Fi as much as possible even though the router itself offers good security.

For this list, we have narrowed down some of the best travel routers available in the market today. Emphasis was given more on the compactness, speeds, and operation modes. Routers that offered media sharing and power bank features were considered as well.

With that information, here are the 9 best wireless travel routers available in 2021.

The TP-Link N300 offers an easy way to create a compact wireless hotspot quickly. It offers flexibility for travelers as it can be powered using an external power adapter or just with a USB connection. The maximum throughput offered is 300 Mbps over the 802.11n band, which should be sufficient for most purposes while on the go. The device can also be used as a hotspot, router, or a Wi-Fi range extender.

While the software UI is not the most advanced, it is more than enough to get the job done for those who require a no-fuss solution for hooking up to hotel or university ethernet. It does take some time to latch on to a network, but once done, there's nothing the user would need to do to get online. If you are looking for the best travel router for hotels, the TP-Link N300 Nano should be high on your list. Fan of TP-Link routers? Check which TP-Link routers made it to our list.

The GL.iNet dons many hats as a Wi-Fi hotspot, repeater, and a programmable gateway for DIY hobbyists. As a Wi-Fi hotspot and converter, it is one of the best travel routers available, offering a maximum throughput of up to 300 Mbps. With the included USB ports, you can simply plug in your existing 3G/4G internet dongle and create a Wi-Fi access point. Like other wireless travel routers, it can run off your laptop's USB port or the bundled 5V DC power adapter. The presence of UART and GPIO ports allows for acting as a portable gateway for IoT development.

The best part about this sub-$50 router is its OpenWRT firmware. The software allows you to use it as an OpenVPN router, Tor router, or even your personal firewall between a public Wi-Fi hotspot and your computer. If you are an advanced user, you can also perform load balancing between multiple internet sources, such as an internet dongle or a tethered device.

The HooToo TripMate Nano is a very popular wireless travel router. It makes for an excellent travel companion despite lacking some of the bells and whistles of slightly more expensive options. TripMate Nano can be used as a hotspot or to wirelessly share files with the connected clients. The included USB port is just USB 2.0 but supports all storage devices.

TripMate Nano is not without its share of quirks, though. For instance, the included USB port cannot power an external hard disk if you are already powering the device via USB. Also, the software can recognize only one drive at a time if you connect two drives in a bridge.

The HooToo TripMate Titan aims to be your all-in-one travel companion by combining a capable wireless travel router and a huge 10,400 mAh battery. So you can charge devices on the go and simultaneously use the device in the access point, bridge, or router modes for staying connected on the go. The standout feature of the TripMate Titan is the FileHub. FileHub makes the Titan into a full-fledged media sharing, streaming, and file management tool. You can share and stream media with up to 5 connected clients and use your Chromecast to stream videos to the big screen.

The HooToo TripMate Titan is not without its shortcomings, however. It cannot work as a wireless hotspot and does not support any OpenVPN clients. It also cannot bridge an iPhone hotspot or stream DRM-enabled media. While a great file server, the software has a few security issues and has been reported to be easily 'hackable'.

The TRENDnet TEW-817DTR is a capable and fast wireless travel router. It is one of the few travel routers to offer wireless AC speeds up to 750 Mbps and can function as a router, WISP, access point, or a repeater. A neat addition is that power plugs for North America, European, and UK sockets come bundled with the package. Therefore, if you are a busy professional whose job involves a lot of international travel, this router is for you.

The TEW-817DTR offers an easy setup, and the Wi-Fi settings come pre-configured. However, this router suffers from a major disadvantage that it cannot be used with captive portals. Most hotels and universities require logging into a captive portal before getting internet access. This router is not compatible with such networks. We hope TRENDnet addresses this in a firmware update soon. The device, as such, performs flawlessly once configured properly.

The GL.iNet GL-B1300 is one of the best travel routers you can get in 2021, and it offers nearly everything you'd get from a conventional wireless router at a very reasonable price. There is dual-band wireless AC support with speeds up to 1.3 Gbps — more than what most hotels, offices, or universities all over the world provide. The GL-B1300 comes with OpenWRT installed right off the bat, which means powerful customization options along with OpenVPN support for up to 20+ VPN clients. The quad-core 717 MHz ARM CPU ensures things move around without bottlenecks. The cool thing is that you can also swap the antennas for more powerful ones if you wish to.

GL.iNet says that the router has been tested for using storage devices up to 64 GB. But given the USB 3.0 port, using higher capacity drives shouldn't be a problem, but we'd suggest avoiding external hard drives as those are power-hungry. Also, some users have reported that GL.iNet is yet to update the firmware to more recent versions. You can use vanilla OpenWRT as well, but you might have to configure many options yourself.

The TP-Link TL-WR902AC performs as well as it looks. It sports dual-band wireless AC with speeds up to 750 Mbps making it easily suitable for most hotel networks on the go. As a wireless device, it can work as a range extender, access point, and hotspot. The software UI is fairly easy to set up and offers advanced features such as DHCP reservation, port forwarding, DMZ, etc.

As such, the device performs well, but experienced users might find the software a bit lacking. For example, there is no provision to configure the same MAC address at once for both the 2.4 and 5 GHz bands. Users have also reported that the microUSB port is further recessed, impeding a tight connection.

The TP-Link TL-MR3040 is a small wireless travel router that slips into any pocket and can operate on both battery power as well as mains. The 2,000 mAh battery is also removable, which is great as you can simply replace the battery instead of waiting for it to charge. The TL-MR3040 supports the wireless N protocol, so you can speed up to 150 Mbps, which should suffice for most purposes. The MR3040 features a USB 2.0 that you can use to connect 3G or 4G modems. However, you cannot use that to host a file server, so if you are looking to streaming media from USB storage, you're out of luck.

The performance of the MR3040 is fine as long as you are well within range and there are no obstructions. Even within range, the speeds tend to drop as you move farther away from the router. Also, there is no facility for activating guest networks. If you can work with those limitations, the TP-Link TL-MR3040 makes for a great portable router at an effective price.

The GL.iNet GL-AR750S is a new travel router that was nominated for the innovation award at CES 2019. The AR750S has a good range and even works as a conventional router for most homes. The best part about the AR750S is that it comes pre-installed with OpenWrt firmware that offers many more configuration options and flexibility than other firmware. The GL.iNet GL-AR750S offers a dual-band connection but supports only the wireless-N protocol. However, due to backward compatibility, connecting wireless-AC devices should not be a problem. This travel router also offers 128 MB of RAM and comes with three Ethernet ports, so you can also hook up your wired devices if needed. The firmware also supports OpenVPN that can connect to many VPN service providers out of the box.

Security-conscious users will appreciate the fact that it comes with Cloudflare DNS over TLS enabled. This provides an additional security layer by routing IP requests over Cloudflare's service instead of the ISP's DNS registry. Price-wise, the AR750S seems to be slightly on the higher side, but you are getting a lot of features in a compact body, making it one of the best travel routers to consider.

Dear readers, that would be all for our list of the best wireless travel routers to consider buying today. If you have additional questions, don't hesitate to post them in the comments below, and we will do our best to provide a timely response.