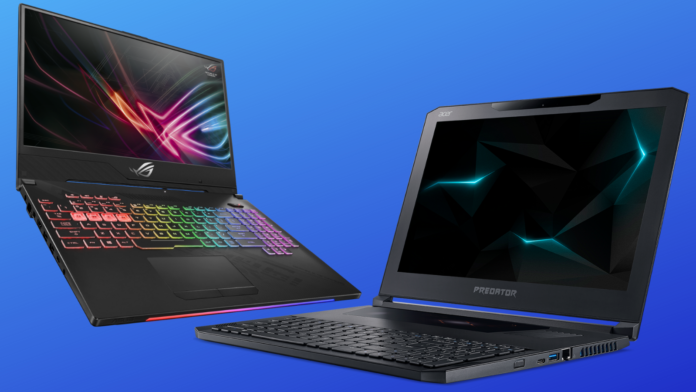 Gaming laptops have come a long way and are now excellent desktop replacements. Although they have some limitations in chassis size, newer power-efficient CPUs and GPUs have ensured a fairly consistent experience. While many aspects of a laptop need to be carefully selected for optimal gaming, smooth frame rates need to support NVIDIA G-Sync or AMD FreeSync.

So what exactly is NVIDIA G-Sync, and why should you look for G-Sync-capable laptops? Basically, G-Sync allows you to sync the frame rates of the GPU with that of the monitor. For example, if the GPU is pumping out 120 fps, but the monitor has only a 60 fps refresh rate, it will not keep up the GPU. Hence users will see screen tearing artifacts that can be very distracting and, in competitive matches, can lead to defeat, especially in fast-paced FPS games. Laptops featuring GPUs that support NVIDIA G-Sync can also connect to external G-Sync displays and experience the same level of smoothness on bigger screens as well.

However, unlike AMD FreeSync, NVIDIA G-Sync is a proprietary technology, and only select display providers and laptop OEMs feature it. G-Sync also requires specific hardware compatibility between the display and the GPU, and this is enabled by an additional chip in the monitor itself. NVIDIA recommends a minimum refresh rate of 120 Hz on the panel before it can be G-Sync certified. You would also need a powerful GPU — at least on the lines of a GTX 1070 to reach those frame rates. Mostly all the latest NVIDIA GPUs seem to work perfectly fine with G-Sync.

This article has included popular gaming laptops that come with G-Sync displays built-in or at least support external G-Sync monitors. Most of these laptops offer great CPU and GPU processing capabilities and can often also help you be extremely productive. So, here are the 8 best NVIDIA G-Sync gaming laptops to buy in 2021.

When it comes to gaming laptops and peripherals, Razer is a household name. The new Blade 17 offers a lot of horsepower in a surprisingly thin and light chassis. It packs in a Core i7-7820HK overclockable CPU, 32 GB of DDR4 RAM, and an NVIDIA GeForce GTX 1080 GPU in an ultrabook-like form factor. That's so much power under the hood, and you can easily play all the latest games without breaking a sweat at framerates befitting the 4K G-Sync display. Despite the slim form factor, port selection has not been compromised.

While the thin form factor is certainly a selling point of this laptop, it also causes a few problems, such as throttling under load. The fans start kicking in even under low load, which can get distracting sometimes. Also, Razer's support can be an issue depending on which part of the world you live in to send the laptop for RMA service.

There cannot be a discussion on gaming laptops without mentioning Alienware. The Dell subsidiary has been a go-to choice for gamers of all groups, and the Alienware 15 R3 seeks to continue this tradition by being one of the best NVIDIA G-Sync laptops in the market. The chassis is thick, but that helps provide great cooling and thermal headroom for overclocking the components. The GTX 1070 is great for VR, and you can also hook up an external G-Sync monitor for even more smooth gaming goodness.

The Alienware 15 R3 sports an Alienware TactX keyboard that supports an n-key rollover for anti-ghosting. It does not disappoint when it comes to performance, but we notice a lot of thermal throttling despite having a fairly large chassis. The laptop had a lot of QC issues in the beginning, but most of those have been ironed out.

The ASUS ROG Strix Scar II is not the slimmest laptop out there, but the extra thickness allows for better cooling and helps get the best out of the powerful Core i7 CPU. The ROG Strix Scar II offers all standard connectivity options and, additionally, comes with a quad-antenna wireless AC setup for improved connectivity. The Scar II uses a non-MaxQ GTX 1070 GPU that allows for much higher frame rates due to the added girth. The 144 Hz FHD display supports NVIDIA G-Sync, but that means you don't get NVIDIA Optimus tech, which can dynamically switch between the iGPU and the discrete GPU. As a result, Scar II suffers from poor battery life.

The Scar II offers great thermal performance, and the fans hardly kick except under load. The keyboard is highly responsive and supports AURA Sync lighting for some cool RGB effects. If you can live with the added bulk and low battery runtime, Scar II is one of the best G-Sync gaming laptops you can buy.

Those who wish to have a good performing G-Sync laptop that is not overly expensive will find their needs met with the Acer Predator Helios 500. The Helios 500 offers everything one expects from a G-Sync gaming laptop, including an 8th generation Intel Core i7-8750H CPU, 16 GB of DDR4 RAM, 256 GB SSD, and an overclockable GTX 1070 GPU. The laptop features a 17.3-inch FHD 144 Hz G-Sync display that offers a great gaming experience devoid of any tearing. The keyboard is backlit, and the color is much more subdued than most other gaming laptops. Multiple lighting zones can light up according to the game. Acer has incorporated a new dual Aero Blade 3D cooling system with five heat pipes that help keeps the CPU and GPU cool under load.

Acer includes the PredatorSense software that gives an overview of the innards of the laptop and allows you to overclock the GPU easily. The major problem with this laptop is that the included power supply is inadequate for long hours of gaming at ultra settings, and the laptop starts borrowing power from the battery. This makes the battery die after some time, and the system starts to throttle due to a lack of adequate power. If you are a power user, you can work around this issue by undervolting the CPU and GPU.

HP caters to the gaming crowd via its Omen lineup of gaming laptops and desktops, and Omen 15 is the company's best NVIDIA G-Sync gaming laptop to date. The Omen 15 offers the latest Intel Core i7-8750H CPU, a generous 32 GB of RAM, and a GTX 1070 for graphics processing. Playing games on the 144 Hz G-Sync panel on this laptop is a treat and will surely be enjoyed by many. The keyboard offers an LED backlight, but that is limited to only the red color. Thus, it would limit the use of this notebook in a professional setting. HP could have reduced the red accents to make the laptop accessible to both gamers and professionals. The Omen 15 offers an enhanced audio experience thanks to B&O-tuned speakers.

While the HP Omen 15 offers great performance, it runs hot under load. You can minimize the heat but undervolting the CPU if you know what you're doing. Unlike some of the other laptops, the GTX 1070 in the Omen 15 is a MaxQ unit, so it is optimized for more efficient power draws. Expect to find at least a 15% performance loss when compared against the non-MaxQ GTX 1070. We wish HP had mentioned this in the product description, though, to avoid any confusion.

The Acer Predator Triton 700 is, without a doubt, the most powerful thin gaming laptop around. Although it features a 7th Core i7 CPU, it is still adequate for any game you throw at it. The 32 GB of memory and an ultra-fast 512 GB PCIe NVMe SSD ensure zero bottlenecks. The Triton 700 features the NVIDIA GeForce GTX 1080 MaxQ GPU, which should handle the latest AAA titles at the excess of 120 fps at 1080p highest settings. The Triton 700 features a rather unusual design with the keyboard towards the lower deck and the upper area, allowing enough ventilation space.

The Acer Predator Triton 700 offers excellent performance without major thermal issues. But the compact design does not come cheap, and the trackpad location is not practical. Battery life is low, and the onboard speakers lack sufficient bass. Despite some cons, the Triton 700 excels as one of the best gaming laptops out there.

MSI is known for producing some of the best gaming laptops, and the GT72VR Dominator Pro is no different. The GT72VR is a good G-Sync gaming laptop available in the market and is powered by the Intel Core i7-7700HQ, which offers a great gaming experience. This is coupled with 16 GB of DDR4 RAM and a GeForce GTX 1070 that supports VR gaming and G-Sync monitors. You can also connect an external G-Sync display for the ultimate smooth gaming experience. However, the internal 120 Hz display is no slouch and has a very low response time, and produces accurate colors. The GT72VR, like many other MSI laptops, comes with a slew of MSI features such as Cooler Boost 4, Nahimic Audio, Killer DoubleShot Pro Ethernet, and a customizable RGB keyboard.

If you decide to get this laptop, update the OS and drivers to the latest versions. The battery life is not very good, but then, we don't expect the battery to last 8 hours with a laptop this powerful. However, the main caveat is that the battery cannot be replaced on the fly, and the laptop needs to be sent to MSI.

Eluktronics is a relatively newer brand, but the company makes some great gaming laptops. The PA71ES-G is a VR-ready gaming laptop that sports a built-in G-Sync display. It features the latest Intel Core i7-8750H hexacore CPU, 16 GB of DDR4 RAM, 512 GB NVMe SSD, and a GeForce GTX 1070 with 8 GB VRAM. The PA71ES-G offers a 144 Hz FHD IPS panel that will be loved by gamers and content creators alike. The keyboard supports customizable RGB backlighting, and Windows Precision drivers power the touchpad, so typing and using the TouchPad make for a good experience. This laptop is not just a treat to the eyes but the ears and includes a SoundBlaster X-Pro Gaming 720 soundcard and a built-in 4W subwoofer.

Few gaming laptops offer this kind of feature-set for the price like Eluktronics does. Their support is great, according to Amazon users, and there is little to no bloatware on the machine. All in all, a great recommendation if you are particular about gaming performance.

Dear readers, those were our recommendations for the best NVIDIA G-Sync gaming laptops available. Remember that a combination of a powerful GPU and a compatible display is necessary for G-Sync to be effective. NVIDIA removes this ambiguity by recommending at least a 120 Hz refresh rate display at the minimum. However, most OEMs bundle TN panels to achieve high refresh rates. TN panels have improved drastically but are nowhere close to IPS or VA panels regarding color reproduction or viewing angles. We'd recommend that you choose a gaming laptop that offers at least a 144 Hz FHD IPS panel.

We hope that this article has helped you in deciding on a good G-Sync gaming laptop. As always, let us know if you have any doubts or suggest any other model we should include, and we will get back at the earliest.