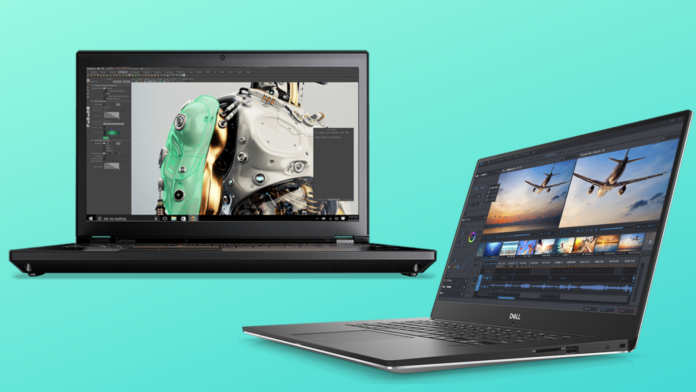 Mobile workstations are a distinct class of laptops designed to handle workloads traditionally performed only on desktops. These laptops come with powerful hardware and can usually be used in tough environments where conventional laptops would just fail. Manufacturers put in a lot of care in creating mobile workstations as they are expected to be highly fault-tolerant and stable.

Not many OEMs make mobile workstations, though. You will come across offerings mostly from Dell, HP, and Lenovo. While the limited number of choices makes it fairly easy to narrow down on a configuration, several important factors must be kept in mind before buying one.

The first is, of course, the CPU. Consumer notebooks generally run Intel’s 8th generation Coffee Lake CPUs and are limited when it comes to certain features such as enterprise management or support for ECC RAM. That’s the reason many mobile workstations use Intel Xeon CPUs that support the above features. ECC RAM is particularly helpful when you are working with critical files and would not like to see any errors in the data while it is being read and written to memory. You can use non-ECC RAM as well with Xeon if your budget is restricted. However, do note that Xeons are not particularly great at single-thread workflows as their consumer counterparts are so things like gaming will take a hit; not that many would prefer gaming on a laptop designed to run scientific apps.

Next comes the GPU. Both NVIDIA and AMD offer dedicated workstation versions of their consumer cards. In the case of NVIDIA, the Quadro cards are the equivalent of GeForce but are tailored towards more professional workflows. You can use them for gaming, but they are clocked somewhat slower and are designed to be more long-lasting for continuous load, unlike their consumer variants. AMD also offers Radeon Pro workstation GPUs, but it is hard to find laptops sporting them.

The build quality and port selection are very important, as is the OEM’s dedication to product support for the lifetime of the device. Unlike consumer and even gaming laptops, mobile workstations come with long warranty periods and priority support, which is not always possible to get in consumer laptops. Also, many OEMs offer assistance for deploying such laptops en masse into your organization if you stand to purchase them in bulk. These laptops are also tested to work with specific apps from independent system vendors (ISVs), so if you’re looking for a laptop to work with SolidWorks, for example, make sure you get one that is certified by them.

So, with the above information, we hereby present the 8 best mobile workstation laptops for 2020 to get that creative push on the go.

Think about mobile workstations, and the Lenovo ThinkPad P71 comes to mind. The ThinkPad P71 can help you accomplish everything from 3D rendering to advanced visualization and simulation on the go. It is ISV-certified for over 100 apps and offers the best of current mobile hardware. The P71 is powered by the Intel Xeon E3-1505M v6 CPU, 32 GB of DDR4 RAM, an NVIDIA Quadro P3000 GPU with 6 GB of VRAM, and a 1 TB NVMe SSD. The specs alone are enough to give the P71 enough juice to power anything you throw it. The 17.3-inch UHD display is factory calibrated, and additionally, you get an X-Rite Color Calibration Sensor in the palm rest to further enhance color accuracy.

The ThinkPad P71’s keyboard is dust and spill-resistant. It is MIL-STD-810G-certified to withstand tough operating conditions, and the laptop offers an impressive port selection that includes two USB Type-C ports. The ThinkPad P71 mobile workstation works great for apps such as SolidWorks or AutoCAD. For those who seek a high level of workstation-class performance, the ThinkPad P71 is a no-brainer.

Dell has recently upgraded its mobile workstation lineup, and Precision 7530 offers top-notch performance for compute-intensive apps. The Dell Precision 7530 mobile workstations make video editing and Photoshop appear easier. The Precision 7530 features an Intel Core i9-8950HK Unlocked CPU, 32 GB of DDR4 RAM clocked at 2,666 MHz, a class 40 1 TB NVMe SSD, and an NVIDIA Quadro P3200 GPU with 6 GB of GDDR5 VRAM. With such specs, one can expect the Precision 7530 to outperform most of its rivals. The FHD display is bright, vivid, and color accurate, and Dell offers calibration tools to ensure accurate color reproduction for color-sensitive workflows.

We felt Dell could have actually included a 4K display for the price. Generally, most mobile workstations feature Intel Xeon CPUs, but the Precision 7530 comes with the consumer Core i9 version. It is in no way a bad choice, but those planning to use this laptop for enterprise use will benefit from the extra security and management features that the Xeon lineup offers.

The Dell Precision 5530 is a true mobile workhorse and can be considered as the workstation equivalent of the immensely popular XPS 15. The Precision 5530 features the Xeon E-2176M hexacore CPU that can boost up to 4.4 GHz. With a 12 MB L3 cache, the Xeon E can help in processing large chunks of data between the various cores much faster than its Core CPU counterparts. Another advantage of using the Xeon CPU is that it supports ECC RAM that offers data correction capabilities so that data is not lost due to memory corruption. The Precision 5530 bundles in 32 GB of DDR4 2,400 MHz ECC RAM should be enough to run the most demanding applications. You also get a class 40 1 TB NVMe SSD. All these features make the Dell Precision 5530 the best choice for engineers and architects who want mobility.

Dell has gone with the 15.6-inch 4K IGZO touch panel for this laptop. This panel offers 100% sRGB and 100% Adobe RGB color gamut, so colors are life-like and extremely accurate. Of course, this can be fine-tuned further if needed. Add to this a 97-Wh battery and ISV certification for many popular CAD, CAM, and simulation programs, and you have a great mobile workstation that can do it all.

HP also offers an impressive lineup of mobile workstations that will appear to professional users. The ZBook 15 G4 comes with an Intel Core i7-7820HQ CPU that can boost up to 3.9 GHz, 16 GB of DDR4 2,400 MHz RAM, 512 GB NVMe SSD, and an NVIDIA Quadro M2200 with 4 GB of GDDR5 VRAM. The ZBook 15 does not offer the more business-oriented Xeon CPUs, but you should not be having any problems in getting to integrate this laptop with your existing enterprise setup. The ZBook 15 has a calibrated FHD display that is great for working with color-sensitive apps and offers excellent legibility even in bright light.

Battery life is not the best out there, but then the components used are powerful so that you can expect about 5 hours of runtime. The HP ZBook 15 works will include popular software such as Autodesk, SolidWorks, MATLAB, etc.

The ThinkPad P52 is another excellent mobile workstation offering from Lenovo that packs quite a punch. The ThinkPad P52 is powered by an Intel Xeon E-2176M CPU that supports ECC RAM, which the P52 offers up to 16 GB but can be configured up to 64 GB if needed. There is 512 GB of NVMe SSD storage available along with a fingerprint reader for Windows Hello-based authentication. The P52 comes with an FHD display powered by the NVIDIA Quadro P2000. The Quadro P2000 is great for providing GPU acceleration in demanding apps such as Autodesk, simulation apps, color-grading apps, and more. The large palm rest and excellent keyboard further add to its appeal among professional users.

The only caveat with the Lenovo ThinkPad P52 is that you cannot add extra SATA drives if you happen to order a configuration with NVMe storage. There is a workaround possible, however, by purchasing a separate ThinkPad Mobile Workstation Storage Kit in order to add another internal SATA drive. Therefore, we suggest that you configure the laptop with the maximum possible storage during the purchase itself. All said, the ThinkPad P52 is one of the best choices out there for those looking for enhanced performance in demanding apps such as 3D modeling and SolidWorks. Even though Thinkpad P52 is cheapest at this price range yet, it’s powerful.

Not many mobile workstations offer a convertible option, but the HP ZBook X360 aims to be different. The ZBook X360 is powered by the Intel Core i7-8750H hexacore CPU, 16 GB RAM, 512 GB NVMe SSD, and an NVIDIA Quadro P1000 GPU. The Quadro P1000 is in the lower end of the Quadro lineup from NVIDIA, but you will find ample power for excellent GPU acceleration in demanding apps. The choice of the CPU in the ZBook X360 could raise eyebrows as the Core i7-8750H is more of a consumer gaming CPU than a true mobile workstation one, but as long as you don’t require using ECC RAM and running compute-intensive apps, the 8750H should run just fine.

The HP ZBook X360 offers excellent build quality, and the hinges in the convertible are of top quality and will take quite a beating. Unfortunately, the high build quality also adds to its weight, and this notebook is not the easiest to lug around. The CPU can throttle under load, and the TouchPad can also get wonky at times. That said, for those who prefer a good combination of a workstation and a tablet, the ZBook X360 is hard to beat.

If a convertible is not your cup of tea, the HP ZBook Studio G5 mobile workstation offers the exact same configuration and functionality of the ZBook X360 in a traditional form factor. You get the same Core i7-8750H CPU, 16 GB of non-ECC RAM, a bright FHD display that is excellent for outside viewing, and an NVIDIA Quadro P1000 GPU. The HP ZBook Studio G5 is also great for collaboration as it features a dual-array microphone for high definition audio during Skype calls, and the onboard audio is tuned by Bang & Olufsen for pristine listening. Like the ZBook X360, the Studio G5’s is built to last and features a spill-resistant keyboard, a multi-gesture TouchPad, and all the standard array of wireless connections and port selection including two ThunderBolt 3 ports.

There is nothing much to complain about the HP Studio G5, and this easily makes for a great mobile workstation under $2,500.

The Dell Precision 7720 borrows a lot of goodness from the other Dell mobile workstations in this list, and its performance is equally impressive as the others. The Precision 7720 is powered by the Intel Xeon E3-1535M that is great for running complex compute-intensive apps, and you also get 32 GB of DDR4 ECC RAM that allows for flawless memory performance. As is standard with most Precision laptops, 1 TB of NVMe SSD storage comes as standard. The NVIDIA Quadro P3000 gives the Precision 7720 and edge over many of its rivals, and the GPU performance is great for professional applications. Many popular ISVs certify this laptop, and you get priority support if you run into problems with any of those certified applications.

The choice of powerful components means that the Precision 7720 is not the most portable mobile workstation there is. However, you get excellent build quality and a great viewing experience thanks to the color-calibrated HD screen.

Dear readers, those were our recommendations for the best mobile workstations available in 2020. Not everyone needs or will be able to make good use of the immense power these laptops posses, so weigh your options well before purchasing. You also need to ensure that the laptop is certified for the program that you will be using so that you get priority support wherever possible. Many of the mobile workstations in the list are fully customizable, and we recommend that you take some time out to select a configuration that can take care of present and future needs.

We hope that this article has helped you in deciding on a good mobile workstation. As always, let us know if you have any doubts or would like to suggest any other model we should include, and we will get back at the earliest.