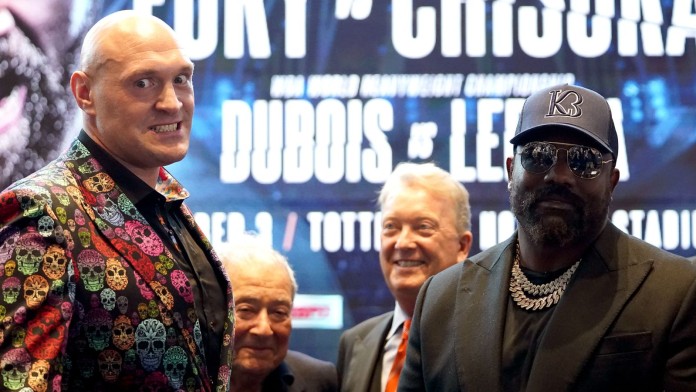 As The Gypsy King Fury prepares to face War Chisora in a match that promises a potential once-in-a-lifetime spectacle, the entire boxing community across the globe is on the edge of their seats. So it’s no surprise that you're seeking the most accessible way to stream Tyson Fury vs. Derek Chisora III online. Well, your quest is about to meet its answers.

This weekend, the current WBC heavyweight champion, Tyson Fury, goes head to head against the WBA International heavyweight champion Derek Chisora for the third time. It is indeed a showdown of the ages! With the likes of Yvan Mendy, Denys Berinchyk, Karol Itauma, and Vladimir Belujsky landing heavy punches, the entire lineup surrounding the historical match of the event is pretty amazing.

Stay tuned as we walk you through the most comprehensive guide on where, when, and how to watch Tyson Fury vs. Derek Chisora III online from anywhere.

When and Where to Watch Tyson Fury vs. Derek Chisora III Live Stream

Fury and Chisora III are geared up to settle their boxing score at the Tottenham Hotspur Stadium in London on Saturday, December 3, 2022. The event is expected to get going from 7 p.m. GMT/2 p.m. ET. Viewers in the UK can watch Tyson Fury vs. Derek Chisora 2022 exclusively on BT Sports, and people in the US will need to tune in to ESPN Plus.

Boxing fans in the United Kingdom can easily watch the live stream if they have access to BT Sports. Similarly, American, Canadian, and Australian viewers can watch the encounter on ESPN Plus, TSN, and Kayo. But if you are traveling abroad, you will be met with geo-restrictions. In that case, you can use a VPN to watch Tyson Fury vs. Derek Chisora III live stream online, as it will eliminate geo-blocks and make it seem like you’re back home.

The process of finding the most reliable VPN service is a bit daunting, especially with so many available options. However, ExpressVPN emerged as a one-stop solution! It goes without saying that ExpressVPN is one of the best VPN services out there right now. You can unblock any site and stream videos without interruption, thanks to the availability of thousands of servers in more than 90 countries. Not just that, ExpressVPN brings top-notch optimization for limitless bandwidth and security. Overall, it is a potent tool and a popular option for those who value anonymity above all else. Try ExpressVPN RISK-FREE for 30 days, and you'll understand why the tool is worth it!

You can visit its official website and subscribe to ExpressVPN (49% Discount + 3 Months FREE). After that, download and install the native app on your preferred device. You can use the activation code in the email or click the unique login link to finalize the registration. When you're ready, activate the VPN, choose a server from your home country, and then connect to a streaming service to watch Tyson Fury vs. Derek Chisora III online.

How to Watch Tyson Fury vs. Derek Chisora III Live Stream Online in the UK

For those in the United Kingdom interested in watching Fury vs. Chisora III, the BT Sport platform stands as the exclusive destination. It's important to remember that this is a pay-per-view (PPV) event. That said, you'll need to purchase it from the BT Sport Box Office, which costs £26.95.

Suppose you don't live in the UK or are planning a move during the event. In that case, a dependable VPN can help you bypass any geo-restrictions and watch the Tyson Fury vs. Derek Chisora III match online. All you have to do is select a server in the UK when you activate the VPN and then head over to the BT Sport platform.

How to Watch Tyson Fury vs. Derek Chisora III Live Stream Online in the US

ESPN+ has the broadcasting rights for the upcoming Fury vs. Chisora III spectacle in the United States. Getting a monthly subscription for $9.99 or saving some bucks by opting for the annual membership at $99.99/year will let you catch the action with ease. Speaking about the ultimate value for money, though, head ahead and grab a combined ESPN+, Hulu, and Disney Plus bundle for just $13.99 a month and sort out your entertainment needs in style.

Traveling away from the US? No worries, using a trustworthy VPN will make sure you can watch the action from any corner of the world. By picking a server in the United States, you can avoid geo-restrictions and watch every match online from your comfort zone.

A piece of good news for the people of Canada - TSN is set to air the clash between Fury and Chisora 3. That said, subscribers who already have access to the channel as part of their cable package can seamlessly stream the action live by inputting their respective provider information. Even if you don't have cable connections, activating the TSN streaming-only subscription for $19.99/month or $199.90/year will make sure you catch up with all the action.

Not being able to watch TSN while you're away from Canada may cause some unease. Well, you shouldn't worry about that at all. With a trustworthy VPN, watching the Tyson Fury vs. Derek Chisora III match is a completely risk-free and seamless experience. Simply follow all the instructions above, and you're good to go!

The event, including the bout between Fury and Chisora III, is being sold as a pay-per-view (PPV) in Australia. You can access Kayo Sports Main Event to watch the fight without any interruptions for $39.95 on December 4.

If you're outside Australia during the event, just use a safe and potent VPN to eliminate geo-restrictions by picking an Australian server. From there on, streaming your favorite matches when they broadcast live will be a breeze!