One of the most popular IPTV services Set TV disappeared and shut down its service without notifying any of its users. Users are under the impression that the lawsuit filed by the Alliance for Creativity and Entertainment (ACE) may have led to the disappearance. Many big players of the Hollywood industry, as well as streaming giants like Amazon and Netflix, have sued the IPTV services for copyright infringement. The entertainment industry is not taking illegal IPTV services lightly, and multiple popular services like Tickbox and Dragonbox have been taken to US courts.

Alliance for Creativity and Entertainment filed a lawsuit earlier this year in April, and the lawsuit claims that the platform is nothing but a tool for piracy which engages in copyright-infringing activities. Despite threats from multiple industry players, the platform did not shut down and kept its services up and running for its members. Thousands of users who access the platform received a notification that the platform may face difficulties but there was no reason offered by the people running the platform. 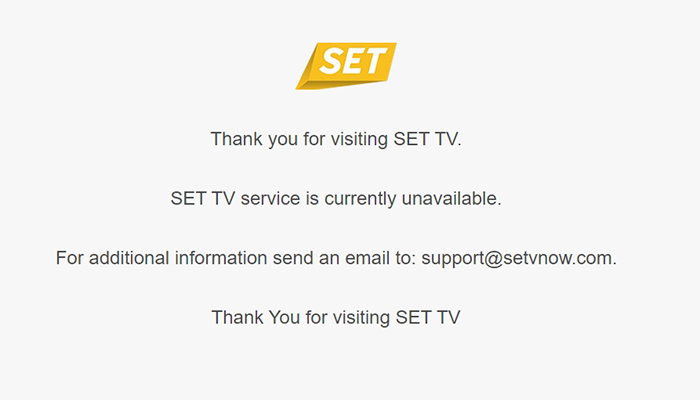 The platform shut down during the weekend with the social media accounts of Set TV neither confirming or denying the involvement of the Alliance for Creativity and Entertainment. Earlier today, Set TV released a statement mentioning that efforts are being made to bring the service back online. However, there is no mention of why the service is down in the statement. It has been over 72 hours since the service has gone down and there is no word on when users will be able to access the service again.

A new IPTV service has been published under the SimplyTV moniker, claiming that it is a replacement to Set TV and will offer the same content and services. The new website is not fully operational yet and offers its services through Web browsers and on Android devices through its official APK being listed online.