How to Watch Slow Horses Free Online on Apple TV+ 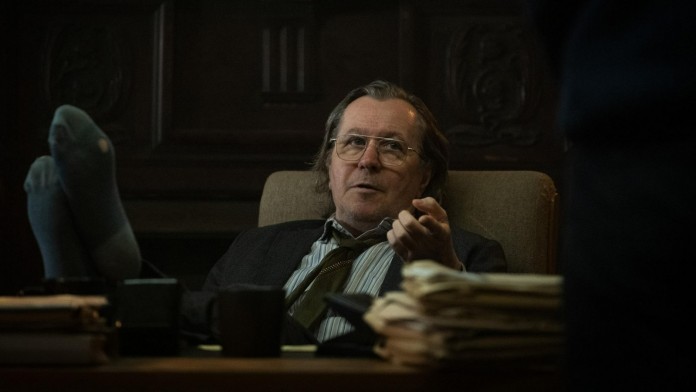 After winning big at the 2022 Oscars, Apple TV+ is adding to its library of Apple Originals, this time with a spy drama. Academy Award-winning actor Gary Oldman will lead the upcoming series titled Slow Horses. We have all the information, so check out where, when, and how to watch Slow Horses free from anywhere.

Based on the book of the same name by Mick Herron, Slow Horses is the story of a bunch of dysfunctional MI5 agents, led by Jackson Lamb (played by Oldman). Due to their career-ending oversights, the gang of misfits ends up in a dumping ground unit in London called the Slough House. The series is described as "darkly humorous." We see the "slow horses" endure tedious tasks and their grumpy leader who expects them to quit their jobs.

The espionage series has an all-star cast including Oldman, Kristin Scott Thomas, Jonathan Pryce, Jack Lowden, and Olivia Cooke. Slow Horses is directed by James Hawes, known for Doctor Who and Black Mirror, and was made for Apple TV+ by See-Saw Films. The theme song for the show, titled "Strange Game," was co-written and performed by Mick Jagger.

Slow Horses premieres on Friday, April 1, 2022, and will be available to stream on Apple TV+ with a 7-day free trial. The first season has six episodes, with the first two episodes debuting simultaneously. After that, you can watch a new episode every Friday.

If you live in the US, UK, Canada, Australia, New Zealand, Europe, or India, you can watch Slow Horses on Apple TV+ since it's an Apple Original series and is available in more than 100+ countries. New users can get a 7-day free trial of Apple TV+. After the trial period, you need to pay $4.99/£4.99/CA $5.99/AU $7.99 per month. Since there's no contract, you can cancel anytime. You can also enjoy three months free if you buy a new and eligible Apple product.

If you are traveling abroad, you may not be able to access your Apple TV+ streaming library due to geo-fencing. To watch the spy drama on the go, you must use a reliable VPN to remove all restrictions. All you need to do is select a server from your home country, turn on the VPN, and then access the platform to watch Slow Horses online from anywhere after it airs.