Google Plus Alternatives 2019: Where to Go After the Shut Down?

Google declaration about the shutting down of the Google Plus platform is something we all have been long expecting. The clock has been set for the summer of 2019, a post which Google will withdraw its support from the platform. Since this announcement, and even long before it, due to the platform’s annoying drawbacks, users have been looking for a viable Google Plus alternative.

Finding an alternative for Google Plus isn’t as hard as you might think. In the last few years, the market has been flushed with promising platforms which would love to help us in switching our social media. Anyway, there wasn’t much contribution by Google Plus on the Internet. Primarily, people used the platform for traffic boosting and conversion due to its automated SEO benefits. Today, however, there are many replacements to Google Plus that are far efficient and functional in comparison. This article will list 10 Google Plus alternatives, which as per our research, are our top available options. Here is the list. 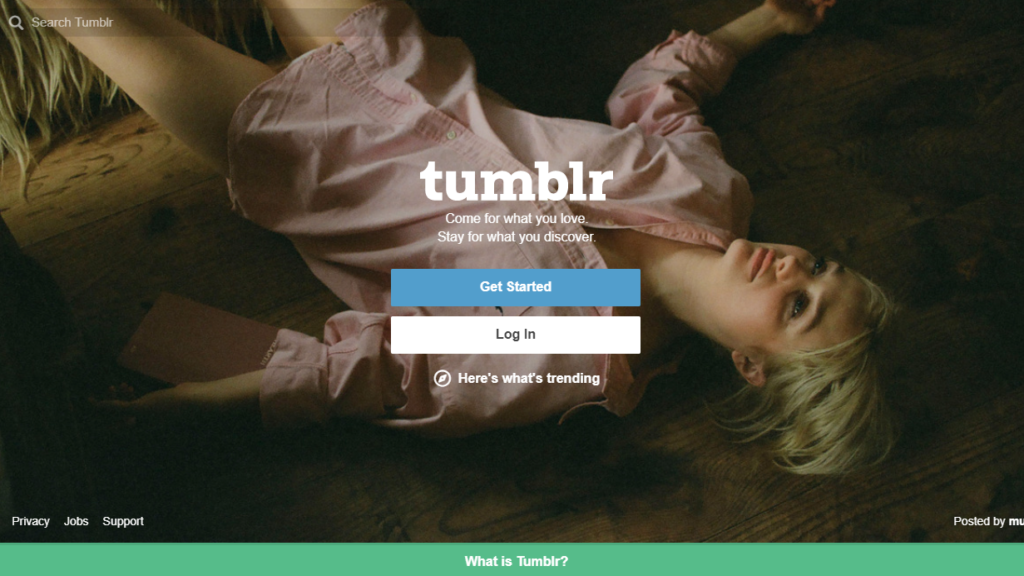 Tumblr encourages people to express themselves, and help them bond with one another over the stuff they love. That’s an impressive pitch for a social media platform. We soon found out that these claims are well executed within the site. It provides a beautiful experience on the internet and makes sharing a joyful activity. You can share everything; photos, texts, videos, and Gifs; with the people of your choice.

The platform is also completely customizable where you can alter your layout, fonts, colors, and everything in between. You can connect with the people and topics of your interest by following them. You can also make use of its private conversation and chat with your friends and family members. There is a whole range of features that make Tumblr an excellent Google Plus alternative. Tumblr is awesome. It deserves the top place on our list. 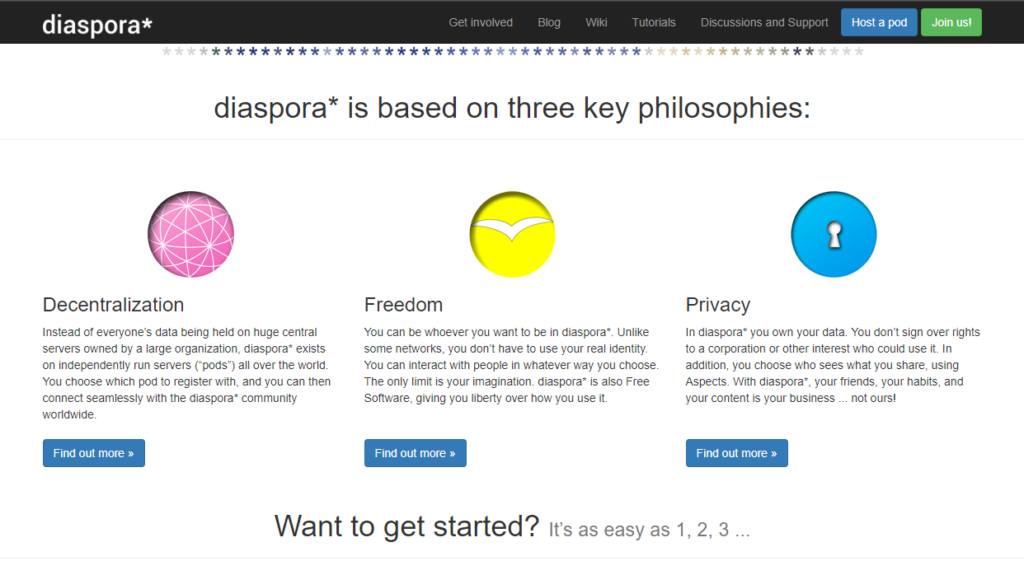 Diaspora is set up as a single decentralized social media platform which is specifically designed to be more private. It was originally introduced as an alternative to Facebook, but going through its capabilities, we found that it's a viable option against Google Plus.

Within the platform, groups are called 'Aspects.' Aspects ensure that your content is shared only with the people you intend to share it with. Sharing is clean and easy with Diaspora. On its website, Diaspora flaunts its decentralized structure, which means it’s a social media software that allows its users to have their own social network. The only downside is that the platform currently has no giant community, but that’s only a downside if you like large groups. For remaining people, there are endless benefits. It might as well be your next spot. 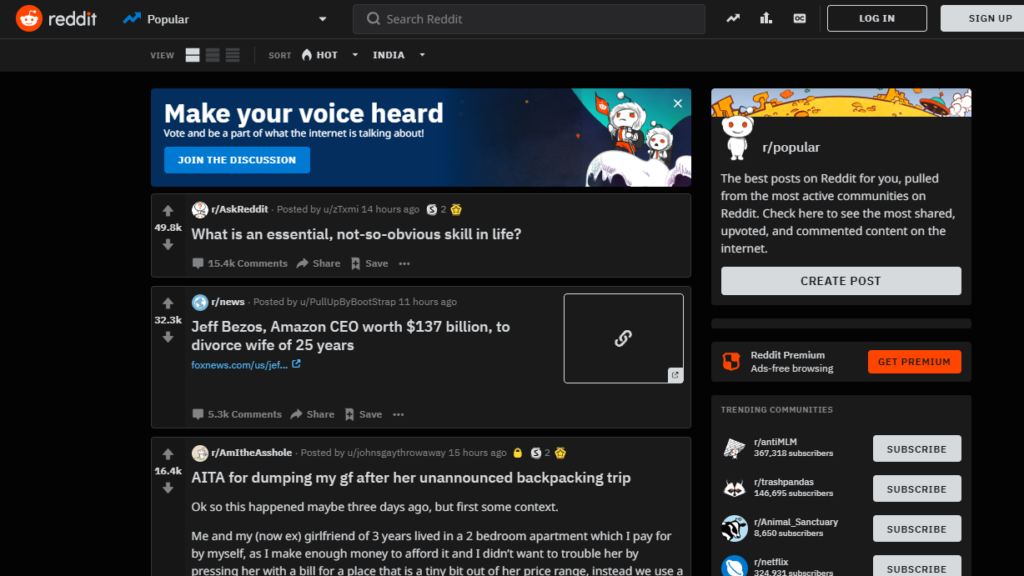 Reddit is a social networking site that allows users to share photos, videos, and articles within its communities. The communities on Reddit are called Subreddits, where the posts are ranked based on upvotes. On the platform, users receive karma points for their various activities and engagement.

Reddit has been recently redesigned and introduced some of its most awaited features. At its current form, Reddit is a complete social platform where people can share and connect with each other, both as a group and in private. It also has a follow button for you to subscribe to subreddits and topics of your interest. It has a huge community, and people who want to boost their content can very well get on Reddit and start engaging. 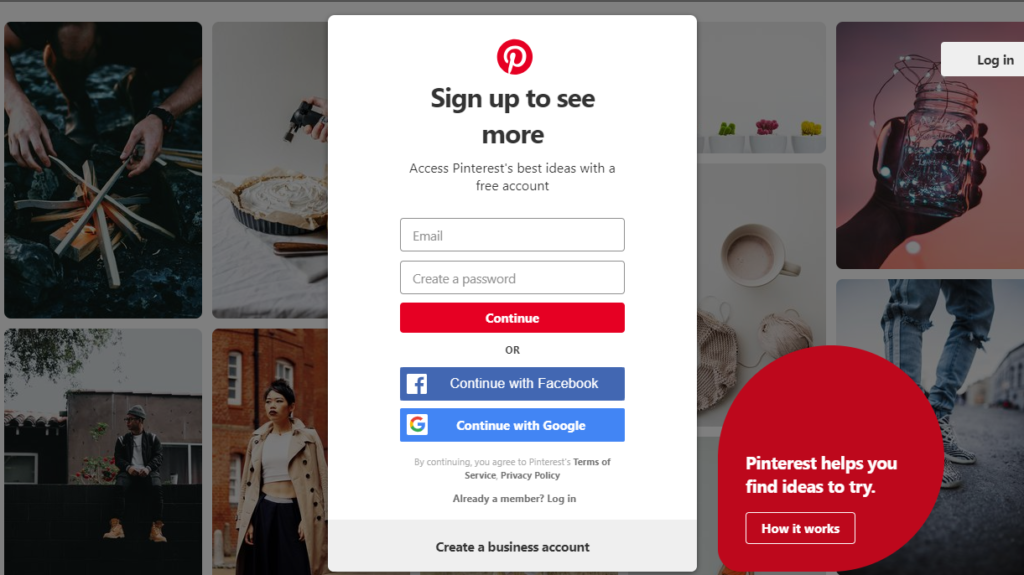 Being dominated by lifestyle topics and brands, Pinterest is your personal pinboard where you can pin anything of your choice. The platform allows you to save anything on the internet in a clean, organized pinboard. Pinterest is huge and very visually impactful.

Everything on the platform is visual, where you can subscribe to other people who share your taste of pictures and topics. This virtual pinboard is designed to share your taste with the world. The community is well-groomed and massive. It has been around for about a decade and consistently growing in terms of eyeballs, and the variety of subjects the platform engages in. If you are a visual person, Pinterest apparently is the best Google Plus alternative. 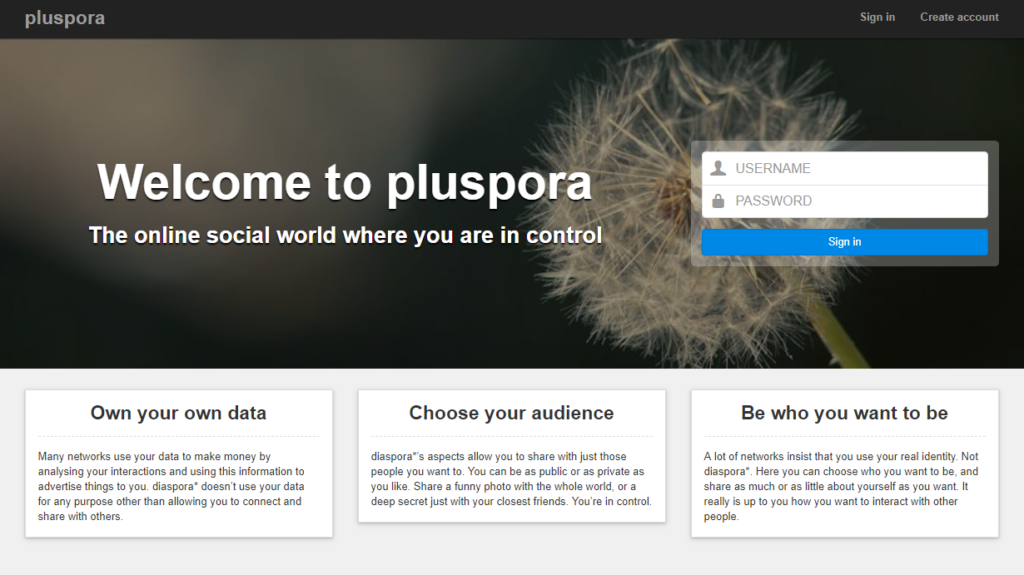 Google Plus has been facing Pluspora’s competition since the platform first launched. There are straight facts to demonstrate how Pluspora is better than Google Plus. The text formatting is better. The embedded link presentation is more elegant. Its chronological feed is refreshing. Pluspora has a very different idea of social networking than usual, where people are not fed with the idea of followers and likes. In fact, there is no mention of such numbers on your profile. Pluspora is the first place where we saw the appropriate usage of hashtags. And apart from all that, it has a dark theme. Naiceee!

The platform has no concept of communities, which for many people could be a deal breaker. But when you get into the ecosystem of Pluspora, you realize that community is an oversold idea. At least here, you can connect with other people directly and enjoy the entire platform as one. 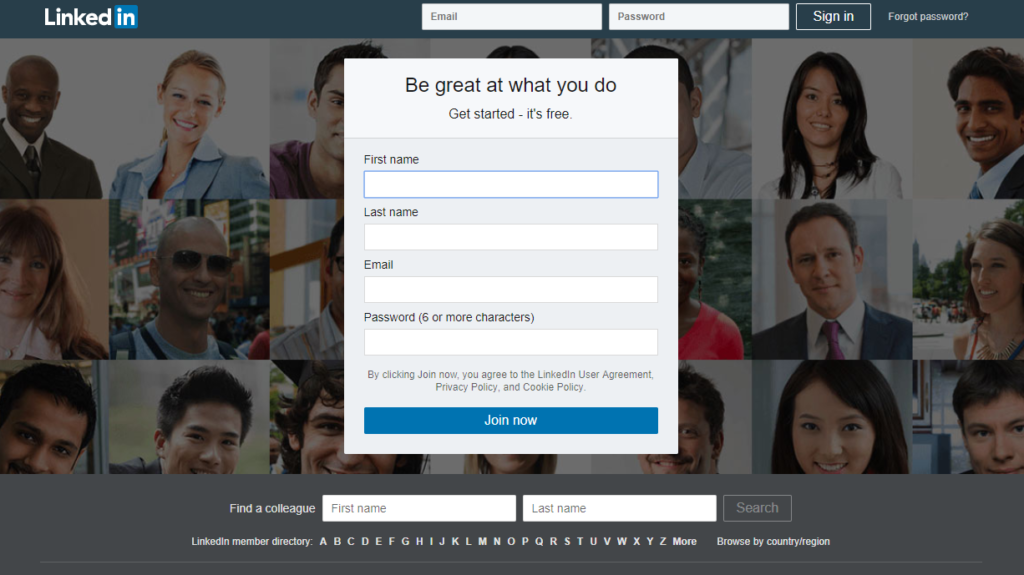 LinkedIn is one of its kind. The platform stands as an only business-oriented social platform based on professional networking. The numbers are astonishing. As per an official stat in 2016, the number of users on LinkedIn are spanning over 450 million.

The platform allows you to connect with the people and brands that matter in your professional network. It allows users to stay updated with the latest industry and business news. Your profile on LinkedIn tracks your achievements so the potential clients and companies can approach you for work. On your profile, you can keep updating your skills and polish your professional resume. The platform also allows you to share articles, photos and videos to build your own personal brand. And if things hit the right chord, you can establish yourself as a thought leader. For professionals, that's the best Google Plus alternative. Period. 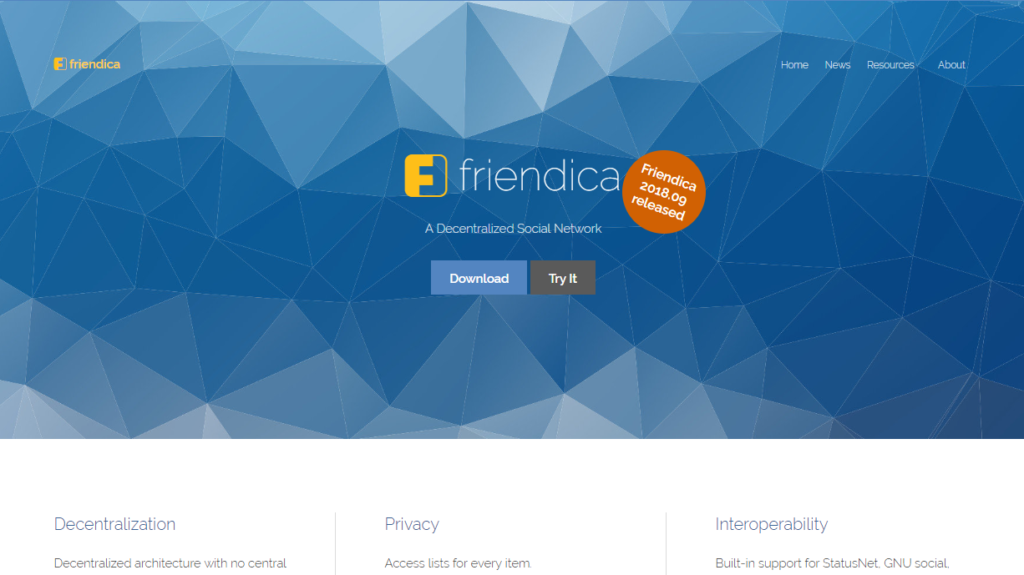 Friendica is a decentralized social network with a specific focus on user’s privacy. The platform allows you to connect with the other users using Friendica's own server. You may easily find your friend and family by integrating your profile to Twitter, Pump.io, and Diaspora. Friendica allows you to publish on various platforms like WordPress and Tumblr through its supported network system. It also can be integrated with your email contacts and RSS feeds. Isn't that great?

The platform’s decentralized structure provides freedom to the users. You can use Friendica either by joining Friendica pre-installed on its servers or install the software on your own server. A single Friendica installation may support up to several thousand members. And each installed Friendica can be connected to as many other installed Friendica as you want. And the best thing among this is that all of it is completely free. 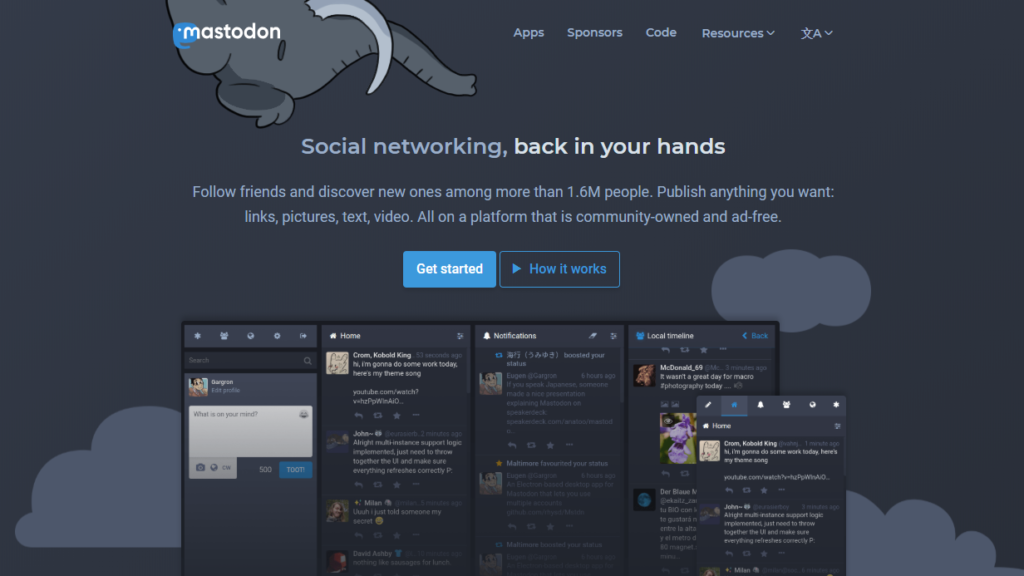 Mastodon is a decentralized micro-blogging platform, which was introduced to compete with Twitter. The part that attracted a massive user-base is the fact that it isn't owned by a single person. Mastodon is completely free and an open source software, and intends to stay the same. The platform is pretty flexible and allows its users to operate it through GNU Social or any OStatus platforms.

Mastodon has a little unusual structure and new users might find it a bit bumpy, like any other original product. Within the platform, it has its own jargons and terminologies that may take some time to get used to. Mastodon has rich features and allows you to share all content forms. Texts, Audio, photos or Videos; you can share them all with who so ever on the community. As we said, the incubation period on Mastodon pays immensely in return. 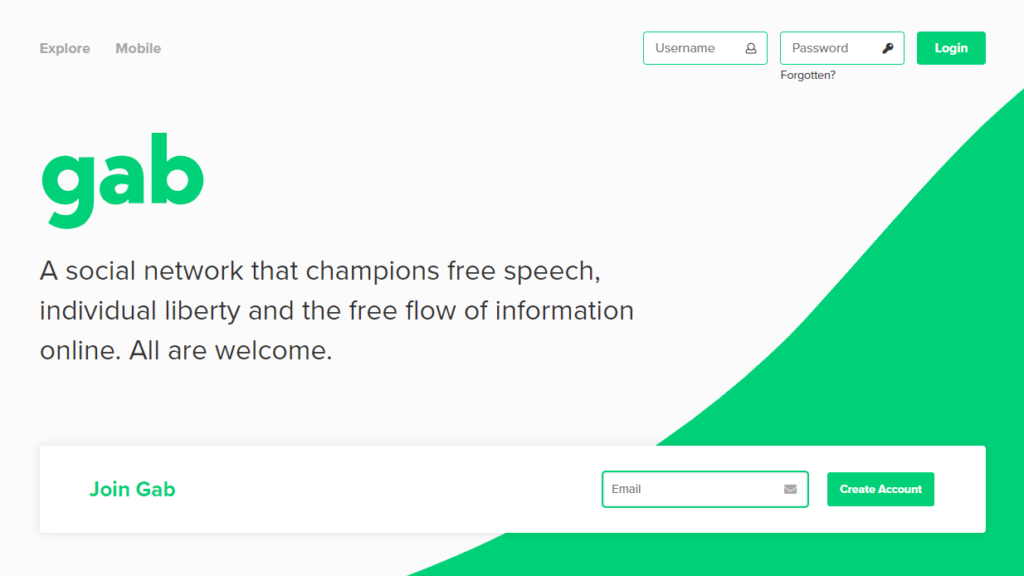 There were many occasions when the news splashed against the major social media brands for trying to curb free speech. Gab, an ad-free social media, is based on the idea that free speech is essential for a community—that individual liberty is the core of free online information. The site encourages people to speak freely and promises to stay as the platform that advocates for free speech. The platform allows people to speak in 300 characters and shows to the community what changed and at what time.

You can also easily filter the information on Gab either by muting words, users, topics, and hashtags. It also has a follow option so you can subscribe to your favorite topics and users. The platform has a voting system to rank Gabs and features emoji for reacting on the shared content. One of the best things about Gab is that it still prefers a chronological home feed, which is rarely a thing on the other social media. With all its rich features, Gab is a perfect filter free alternative to Google Plus. 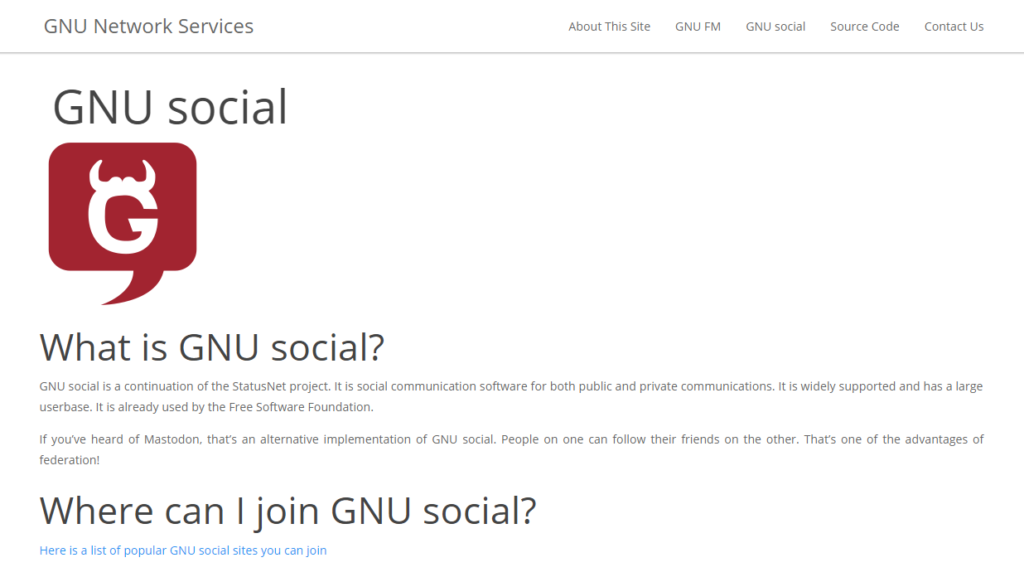 GNU Social is a Communication software for both public and private that could be described as a slightly downgraded version of Twitter. This open-source platform works seamlessly both as an independent self-hosted software and a diverse micro-blogging community. The platform is known for its customizable and feature-packed interface, which could be a task at hand for average users. But apart from the initial friction, the platform delivers a convenient base to connect with its communities.

The history of GNU Social is also interesting. The product that we see today is a merge between FreeSocial, StatusNet and a few other open-source projects. It’s a transformational journey of a platform over 9 years of a stretch. The current version of GNU Social is a glowing example of what modern social media should be like. It is definitely a viable Google Plus alternative.

At the dire need of Google Plus alternatives, this article will help you in finding an apt social media platform which can conveniently fill the gap.

Do you agree with our list, or do you think we have missed one of your favorite social media platforms? Do let us know in the comments. Also, to get instant tech updates, Follow TechNadu’s Facebook page, and Twitter handle.