DirecTV Now: Then and Now – The Drastic DirecTV Now Changes Could Sink This Boat 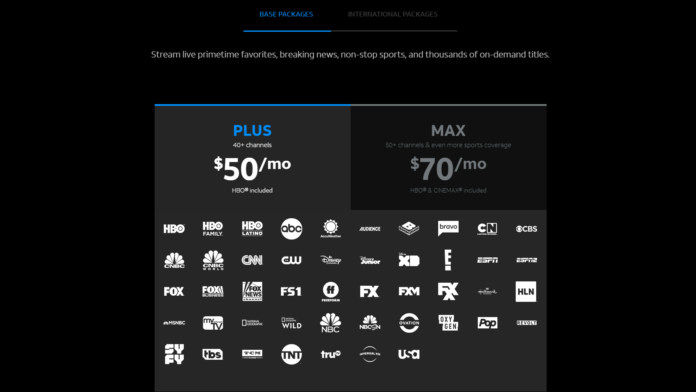 Even though they promised that DirecTV Now wouldn’t get more expensive or that it would suffer many changes during the AT&T-Warner merger, that’s exactly what happened today with DirecTV Now.

After slipping up and revealing the changes last week and following heavy reporting on the topic, they’ve gone ahead and made the updates live than originally intended. We want to go over the changes that are expecting new DirecTV Now subscribers and compare the old and the new platforms.

Now, DirecTV Now comes with two bundles only – Plus ($50/mo) and Max ($70/mo). While the price is somewhat explained by the presence of HBO in Plus and HBO and Cinemax in Max, the number of channels they feature is a lot lower than it used to be. The Plus bundle features 40+ channels, while Max comes with 50+ channels only.

Old customers can carry on and keep their plans, the company said. It is unclear, however, for how long this is going to happen since the two new bundles are missing dozens of channels.

Some things have changed up around here too. First, the three International packages they’ve been offering for a while – Vietnamese, Brazilian, and Korean – are still around. They feature the same channels as they did before, but the Brazilian pack has gone from $25 per month to $30 per month, so you might want to take that into consideration too.

The Spanish add-ons are also still around. The Deportes pack features 5 channels and costs $5 per month, and the Espanol pack continues to feature 50+ channels, but the price has gone up from $10 to $15 per month.

When it comes to premium networks, DirecTV Now has made some changes. As mentioned, HBO is now included with the Plus and Max bundles, while Cinemax is also integrated into the Max Bundle. If you want to get the Plus bundle, you’ll have to pay $11 per month for Cinemax, however. Plus, Showtime and STARZ continue to be available too, but their price has gone up from $8 per month to $11 per month, which is a bit of a bummer.

There aren’t any other changes that could improve the experience for users everywhere. For instance, they could have upgraded the cloud DVR feature to allow users to record more than 20 hours of content, but that hasn’t happened. Also, the service continues to support two simultaneous streams and offers the third for $5 per month, instead of simply offering it for free as other platforms do. Also, there’s still no support for either Xbox or PlayStation.

The changes DirecTV Now has implemented are major and they overhaul half the platform – the one where people get to pay more money for fewer channels. There are literally dozens of channels that will no longer be available for DirecTV Now subscribers and simply integrating HBO and Cinemax into the bundles won’t be “shiny” enough to distract from the price surge and the lack of content.

Ultimately, it remains to be seen what direction the platform will go from now, but it’s quite likely that the number of people signing up for the service will drop. The whole point of switching to live TV platforms is to pay less to watch your favorite channels – when your channels disappear from the list and the prices go up, there’s not much you can do but switch. After all, there are plenty of live TV platforms. The next subscription numbers DirecTV Now will report will likely mirror the effects of this switch.

DirecTV Now used to be a versatile platform that allowed quite a bit of customization and offered a wide range of channels. That is, sadly, no longer the case. You can go ahead and read our DirecTV Now review to find out more about the service.

Let us know what are your opinions on the topic. Will you subscribe to DirecTV Now? How do you like the changes? Drop us a note in the comments section below and share the article online if you have the time. Follow TechNadu on Facebook and Twitter for more tech news, reviews, guides, and interviews.