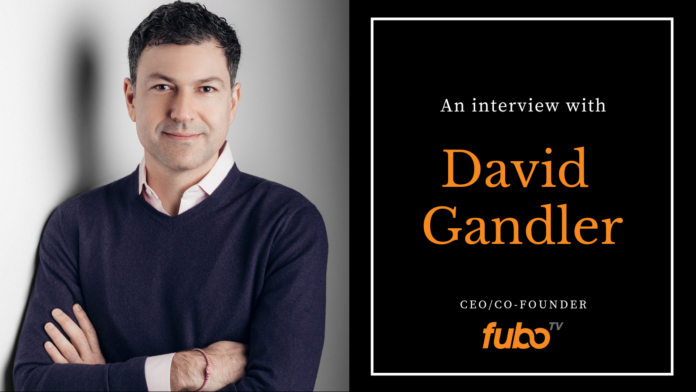 Four years ago fuboTV was born as a streaming service dedicated to people across the United States who had a love for soccer. Now, fuboTV has grown into a live TV platform that gives people access to dozens of sports channels, and that’s now growing to be more family-inclusive. David Gandler is one of fuboTV’s co-founders and current CEO and he agreed to an interview with TechNadu.

As you’ll see by reading on, we discussed the past and future of fuboTV, the company’s expansion plans, and the cord-cutting industry as a whole. So, here is our interview with David Gandler, Co-founder and CEO of fuboTV.

TechNadu: fuboTV offers a wide range of channels, most of which focus on sports. Why did you choose to make sports fuboTV’s main focus even after switching from the original format?

David Gandler: We launched fuboTV as a soccer streaming service in January 2015. Over the next few years, we expanded fubo first to cover all sports, and then also entertainment and news.

This tells us the entire household is watching fubo – the sports fan, the news junkie, the movie buff. We also have a breadth of children’s programming through our recent deals with Viacom and Turner, which give us Nickelodeon and Cartoon Network respectively. fuboTV offers something for everyone and is a real cable replacement product.

TechNadu: How has fuboTV grown in the past few years as cord-cutting has grown in popularity? How many subscribers are you seeing nowadays?

David Gandler: Earlier this month, it was reported that the five biggest U.S. pay-TV providers lost 3.2 million people to cord-cutting in 2018 – an all-time record – and that number is expected to grow in 2019. Interest in vMVPDs like fubo is only getting stronger. We announced late last year that we were approaching 250K U.S. subscribers, a +100% increase over the prior year. We’re on track for strong growth in 2019. The macro tailwind is strong.

TechNadu: Why do you think people are still reluctant to switch to live TV streaming platforms since traditional cable companies are still way ahead as far as subscriber numbers?

David Gandler: I think it comes down to awareness and ease of use. Once cable customers learn how easy it is to cut the cord and find a live TV streaming service that will meet the needs of everyone in the home- and without a long-term contract and hidden fees – they make the appointment to have the cable box removed.

TechNadu: What do you consider to be fuboTV’s biggest advantage over its competitors like PlayStation Vue, DirecTV Now, and the others?

David Gandler: Product innovation and a premium viewing experience are our biggest advantages not only over our live TV streaming competitors but also over traditional cable TV.

Our product and engineering team – which is much, much smaller than our competitors’ – have internally built a tech stack specifically for a live streaming business. As a result, we have been able to deliver the most optimal quality experience for our customers. That includes being the first – and still, only – virtual MVPD to launch 4K HDR Beta, which we did back in July of last year during the World Cup. We were the first live TV streaming service to launch “dynamic discovery” – a patent-pending interface through which subscribers can browse live entertainment, news, and sports programming via an in-progress preview directly on the home screen and seamlessly click to full video. We’ve upgraded our apps and recently launched a new home page which showcases the full breadth of our sports, entertainment and news programming.

Our commitment to delivering a premium viewing experience has paid off in subscriber growth and increased user engagement. We’re seeing strongest engagement on our connected TV devices – over 70 hours per subscriber in December, nearly 2.5x higher year-over-year.

TechNadu: Where do you see the future of the cord cutting industry in the next few years? What major changes do you think we’ll see?

David Gandler: Cord-cutting will only increase and more people will replace their traditional pay-TV subscription with a live TV streaming service. I think the live space will become larger in terms of market share but smaller in terms of how many players are in the market. There will be fewer vMVPDs in the marketplace.

TechNadu: What type of channels do you plan to add to the offering? We couldn’t help but notice the entertainment section lacking a bit, which could deter many families from picking fuboTV.

David Gandler: Just a few days ago we announced a deal with Viacom, bringing popular channels like MTV, Comedy Central, TV Land, Paramount Network and Nickelodeon, the no. 1 entertainment brand for kids, to fuboTV. Our goal is for fuboTV to appeal to the entire family and with Viacom added to networks like Turner (TBS, TNT, Cartoon Network, CNN, etc), CBS, NBC (including Bravo and USA), FOX, AMC Networks, A&E, HGTV and so many more, we truly have programming for everyone.

TechNadu: What about premium channels? Are we going to be able to add the likes of HBO, Cinemax, or Starz anytime soon?

David Gandler: Premium channels are an important part of our content strategy. We recently became the only vMVPD to offer both AMC Premiere and FX+. We already have Showtime. There’s more to come – watch this space.

TechNadu: Saying there are a lot of sports channels on fuboTV is a clear understatement, and yet users are missing out on a lot of events where ESPN has exclusivity. What’s the story here? Are we ever going to see ESPN channels on fuboTV?

David Gandler: We are always talking to potential content partners, so it’s certainly possible ESPN will be on fuboTV someday. But even without ESPN, there is very little that we’re missing. fuboTV already has all of the major sports and leagues as well as niche sports through national channels, regional sports networks (RSNs) – of which we have more than any other vMVPD – and sports-dedicated channels like NFL Network, NBA TV, Tennis Channel, beIN Sports, Pac 12 Network, Golt TV and so many more,

TechNadu: You recently expanded abroad, launching fuboTV Spain. How are things going on that end?

David Gandler: Launching in Spain was very exciting for us – we were the first vMVPD to enter Europe. It’s going well so far. We launched a package of Spanish-language channels, including Europe’s leading entertainment channel, Movistar Series, which broadcasts the most popular U.S.-produced TV shows from Netflix, Hulu, HBO and many more. We were the first OTT platform to launch Movistar Series, so that was a great way to enter the market.

We’re still in a soft launch mode, but our goal is to bring the same premium product experience that we have in North America to customers in Spain.

TechNadu: Are there any other countries where you’d like to expand the business in the future?

David Gandler: Yes, there are a few countries where our product offering could be really appealing and we’re exploring those markets now. Our goal is for fuboTV to be one of the top two or three vMVPDs globally in the next few years. We’re only just getting started.

What do you guys think? Do you use fuboTV? What’s your favorite thing about the platform? Let us know in the comments section below, and please share the article online if you have the time. Follow TechNadu on Facebook and Twitter for more tech news, interview, guides, and reviews.