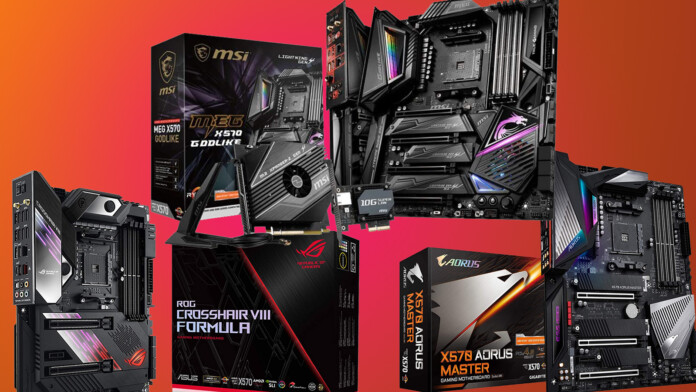 In terms of performance, nothing beats the newly-released Ryzen 9 5950X CPUs from AMD. The Zen 3 architecture is faster and more efficient than everything else on the market when it comes to desktop processors, at least until Intel manages to deliver some competition in 2021.

The 5950X is also a beast in terms of multi-threading, not just single-core performance in gaming. You can get a lot of work done with 16 cores and 32 threads, at least if your motherboard can deliver the necessary power to the CPU. As such, here are some of the best motherboards to pair with the Ryzen 9 5950X:

Features: The MEG X570 GODLIKE from MSI offers so many features that it even comes with a couple of add-in boards, mainly because there was no room left on the board itself. Not only that, but there’s hardly anything missing in terms of ports and connectivity.

As such, this is one of the few motherboards out there that sport a grand total of four PCI-Express x16 slots, as well as three M.2 slots with full support for Gen 4 speeds. To top things off, the box includes an M.2 expander card, which allows you to add two more M.2 drives to your system.

Naturally, no expense was spared in terms of cooling and VRM, which means that you can really push your Ryzen 9 5950X to its limits. RAM speeds can be pushed past 5000MHz as well, which is a great combo with the Zen 3 architecture.

Connectivity: Surprisingly, the rear I/O does not impress in terms of USB connectivity, which is a bit weird to see on such an expensive board. There are only six USB ports in total, one of which is Type-C. The five remaining ones are split into two 3.2 Gen 1 and three 3.2 Gen 2 ports.

The onboard audio looks fairly standard at first, too, with the usual five inputs and one optical output. However, there’s an additional input for 6.3mm jacks, which are typically used by high-end headphones.

In addition, there are two Ethernet ports as well, depending on whether you need 2.5Gbit or 1Gbit. Obviously, both Wi-Fi and Bluetooth support is included as well. The big news comes in the form of a separate 10Gbit add-in card, which is definitely a rare sight. While not many people have access to that kind of Internet connection yet, this definitely makes the board a lot more future-proof.

Performance: Nothing is holding this motherboard back when it comes to squeezing every bit of juice out of your components. Granted, you don’t need such an expensive board to use your 5950X at its full potential, but some extras are simply not available on other models.

As such, the sheer excess of M.2 and PCI-Express x16 slots is what sets this board apart from the competition, not to mention the 10Gbit add-in card.

Features: The Prestige X570 Creation is the next step down in terms of features if you are not prepared to spend that much money on the GODLIKE model. In essence, this board offers many of the same features, except in smaller numbers when it comes to PCI-Express and M.2 slots.

There are only three PCI-Express x16 slots this time around, although that is still plenty. There are also only two onboard M.2 slots, although you still get the expansion card with an additional two slots on it and a fan to keep them cool.

As far as the power delivery is concerned, there’s very little difference between this board and its more expensive counterpart, which means that the performance should be comparable as well. In addition, you can easily push the RAM speeds way past 5000MHz as well.

Connectivity: The Prestige actually offers more USB ports than the GODLIKE version while obviously leaving out some of the extras. There are two USB 2.0 ports, eight USB 3.2 Gen 1 ports, three USB 3.2 Gen 2 ports, as well as a USB 3.2 Gen 2 Type-C port.

Another surprise is the inclusion of an onboard 10Gbit Ethernet port, which is on top of the 1Gbit port. Even if you are not getting a 2.5Gbit port, this is still a very good deal, especially if you take a look at how much 10Gbit extension cards usually cost.

Lastly, there are also two antennae that can transmit both Wi-Fi and Bluetooth signals, just in case you are not interested in making use of a wired connection. A clear CMOS button is included as well, although there is no BIOS flash button on the rear I/O.

Performance: Believe it or not, your overall system performance won’t be all that different with this board than with the more expensive model. In essence, this is a stripped-down version only when it comes to storage and PCI-Express expandability.

Hence, you can still get excellent OC performance from your Ryzen 9 5950X, as well as push your RAM kit to its limits in terms of frequency.

Features: The Crosshair line-up from Asus is well-regarded by gaming enthusiasts, especially if you also want some overclocking headroom. The board itself is covered in heat sinks from top to bottom while also offering a multitude of slots for fast PCI-Express devices.

The only slight downside is the fact that Asus is not very clear about RAM speeds. As such, the maximum supported frequency appears to vary depending on the CPU architecture, except that the older generations offer better OC support for some reason.

Other than that, the board comes with two M.2 slots, both of which are capable of Gen 4 speeds. That may seem rather limiting when compared to other models on this list, but not many people need more than two NVME drives anyway.

Connectivity: The rear I/O looks pretty nice and crowded, especially in the USB department. There are four USB 3.2 Gen 1 ports, seven USB 3.2 Gen 2 ports, as well as an extra USB 3.2 Gen 2 Type-C port. These should cover pretty much everything you need, including VR devices.

There are also two Ethernet ports to choose from, depending on whether you want 5Gbit or 1Gbit speeds. The inclusion of a 5Gbit port is definitely a good thing, but we can’t help but point out the fact that other motherboards in this price range offer 10Gbit ports instead.

Bluetooth and Wi-Fi modules are included too, and there are separate buttons for CMOS clear and BIOS flashback on the rear I/O as well.

Performance: As advertised, the board can keep pace with the Ryzen 9 5950X, especially in terms of power delivery. The state-of-the-art VRM design should allow for some unorthodox OCs as well, depending on the viability of your cooling solution.

RAM speeds are also probably fine, despite the unusual spec sheet provided by Asus. In essence, the XMP profiles should be able to exceed the advertised speeds, especially since many cheaper boards can do the same.

Features: The differences between the Hero and Formula boards are pretty minimal in terms of pure performance, so you can definitely save some cash if you are not interested in high-speed Internet or RGB headers.

In fact, your CPU will perform just as well on this motherboard as it would on the more expensive Formula model, so you are not losing much in terms of OC potential. The same can be said about RAM speeds, not to mention the fact that you still get three PCI-Express x16 slots to play with.

All three PCI-E slots are capable of Gen 4 speeds as well, which means that you can either hook up multiple GPUs or use them for M.2 expansion cards in order to expand your storage possibilities.

Connectivity: The back of the board is just as generous in terms of USB connectivity, with seven USB 3.2 Gen 2 ports, four USB 3.2 Gen 1 ports, plus one additional USB 3.2 Gen 2 Type-C port. The audio jacks are also the same on this model as well.

One huge downside is the lack of Wi-Fi and Bluetooth modules, which is frankly bizarre for such an expensive motherboard. Thankfully, at least you get two Ethernet ports to choose from, including a 2.5Gbit one.

Performance: If you are willing to live without Wi-Fi, the Crosshair VIII Hero is quite capable in terms of raw performance. The VRM solution is still one of the best out there, which means that your 5950X won’t be wasted on it, especially if you are brave enough to do some overclocking as well.

The three PCI-Express x16 slots make this board compatible with SLI setups as well, although it should be noted that the only Gen 4 GPUs that support this capability are the RTX 3090s. Having two of them makes little-to-no difference in games, however, so keep that in mind.

Features: The reason the AORUS Master from Gigabyte appears on many of our lists is due to its amazing price-to-performance ratio. As such, the board is not quite as expensive as other models on this list, yet it still manages to keep up with them in terms of raw performance.

To begin with, the board features three M.2 slots and three reinforced PCI-Express x16 slots, which is quite the rare sight in this price bracket. In addition, you can push your RAM speeds beyond 4400MHz as well, which goes hand-in-hand with what we know about the Zen 3 architecture.

Lastly, the board doesn’t disappoint when it comes to connectivity as well. There are plenty of ports on the rear I/O, as well as a plethora of fan headers on the PCB itself. To make things even better, the standard ATX layout allows this motherboard to fit into basically any case out there.

Connectivity: While there are plenty of USB ports to choose from, not all of them are particularly fast, unfortunately. There are four USB 2.0 ports, two USB 3.0 ports, three USB 3.1 ports, as well as one USB 3.1 Type-C port. Overall, not a bad deal, but the lack of Gen 3.2 ports might be a deal-breaker for some people.

You also get a 2.5Gbit Ethernet port, and that’s on top of an extra 1Gbit port. Wi-Fi and Bluetooth connectivity are included, not to mention that the five audio inputs are gold-plated for better conductivity. BIOS flashback and CMOS clear buttons are available too.

Performance: The best thing about choosing the AORUS Master over more expensive boards is the fact that you still get tons of performance, mainly thanks to the industry-leading VRM design. All three M.2 slots are also covered by heat sinks, which means that they will perform at their best.

There’s also the fact that you have three PCI-Express x16 slots at your disposal, which can come in handy if you are interested in expanding your NVME storage in the future. They are also nice to have for potential SLI solutions.