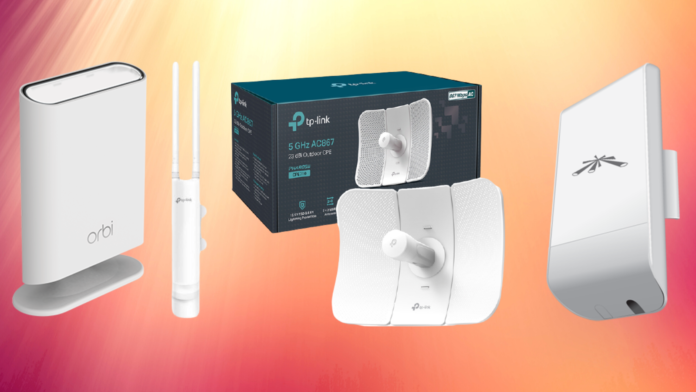 Having good Wi-Fi or wired networking is not of much use if you cannot get to use your network's benefits wherever you like. Often, many Wi-Fi extenders are meant for indoor use and offer coverages designed for interior spaces.

But what if you want internet access in your garden, park, or even a recreational vehicle without having to rely on spotty cellular connectivity or compromising on Wi-Fi connectivity inside the house?

This is where long range outdoor Wi-Fi extenders come in.

Related: The Best Wi-Fi Extenders to Buy in 2020 — Maximize The Reach of Your Internet Connection

What Should You Look for While Considering a Long-Range Outdoor Wi-Fi Extender?

With that information at hand, here are the 7 best long range outdoor Wi-Fi extenders to buy in 2020.

Features: TP-Link Omada AC1200 EAP225 is a long range outdoor Wi-Fi range extender best suited for any setting, including homes, hotels, offices, and other places. TP-Link EAP225 offers great hardware and advanced software tools for excellent coverage and efficient administration of the network. TP-Link Omada EAP225 is IP65 rated for protection from the elements. There aren't too many ways to access the innards in this outdoor range extender save for the single Ethernet port at the bottom.

This long range outdoor range extender offers two omnidirectional detachable antennas that support transmission over 2.4 GHz and 5 GHz bands, providing a maximum theoretical bandwidth of 1.2 Gbps. The Omada Controller Software makes it easy to configure all EAP225s on the premises and also helps identify any weak spots. The EAP225 can be configured to operate each band as a different SSID.

Performance is consistent with expected speed drops as one increases the distance from the router. Speed drops are often only seen at distances above 60 m, but they are still decent even if one goes out of line-of-sight.

Features: If you are on the lookout for a cheap long range outdoor Wi-Fi extender that does not compromise too much on the features, the Galaway Wi-Fi Range Extender may be a good option. The Galaway extender supports wireless AC speeds up to 600 Mbps, which is not too high but should suffice if your internet speeds are below that mark.

The Galaway outdoor range extender is IP65 rated for weatherproofing. It features just one Ethernet port, which serves for both data and power making it useful in locations without a power socket. The Galaway extender can serve in different modes as well: access point, repeater, and router.

Coverage and Performance: The Galaway range extenders offer two 7 dBi omnidirectional detachable antennas that offer a range of up to 500 m outdoors and up to 150 m indoors. You can swap the antennas for even higher coverage if needed. The performance of the extender is good for most basic purposes. However, the lower throughput can be an issue if there are too many devices connected at once requiring high-speed data. Also, the extender transmits in the same band it is connected to, so expect signal overlapping.

Features: The Netgear Orbi RBS50Y is a long range outdoor Wi-Fi extender satellite that works with your existing wireless AC router. The RBS50Y is IP66-certified for all-weather protection outdoors. It comes with a tri-band mesh router system for fast speeds and seamless roaming across the entire coverage area. The Orbo RBS50Y offers an ambient lighting system that lends a cool aesthetic touch when placed in outdoor settings such as a pool or dinner table.

Inside the satellite are six high gain amplified antennas for the best possible coverage. The Orbi can be set up and controlled easily via the Orbi app for iOS and Android devices or via Amazon Alexa voice commands. The Orbi RBS50Y also bundles Netgear's Circle Smart Parental Controls to manage the time and content for different users.

Coverage and Performance: Thanks to the six antennas, Netgear Orbi RBS50Y offers excellent coverage of up to 2,500 square feet. If you need even more, simply add another Orbi to create a mesh network. All connected Orbis can be administered centrally from the Orbi smartphone app. The Orbi RBS50Y also features a dedicated 4x4 1.7 Gbps backhaul channel, so the actual speeds are not comprised when two Orbi satellites talk to each other.

Features: There are times when you have a public Wi-Fi down the street but cannot connect to it as your existing outdoor Wi-Fi setup is not powerful enough to latch on to a weak signal. For those who need a long range Wi-Fi extender that can cover 1 mile or above, the CC Vector Extended Long Range Wi-Fi Receiver is a good option. The CC Vector does not come cheap but is a very powerful outdoor range extender and receiver.

The CC Vector uses a 15 dBi directional parabolic antenna that maximizes coverage and minimizes interference from other Wi-Fi signals in the vicinity. The antenna then relays the signal to the Wi-Fi router to which other clients are connected. Apart from Wi-Fi, there are two Ethernet ports available that allow wired connections to other PCs or routers.

Coverage and Performance: The 15 dBi parabolic antenna is powerful enough to receive signals up to half a mile away in general and up to three miles away under ideal conditions. Of course, the actual coverage will be affected by the distance of the source wireless signal and any obstructions in between.

One important aspect to keep in mind with the CC Vector is that it supports wireless speeds only up to 802.11n, which means the total throughput will be around 150 Mbps. This should not be much of an issue as most public hotspots have much lower bandwidth.

Features: The Winegard RW-2035 offers extended outdoor Wi-Fi coverage from your indoor Wi-Fi network without much hassle. The RW-2035 comes with three detachable high gain 5 dBi antennas that offer decent coverage for most outdoor spaces. The Winegard RW-2035 supports Power-over-Ethernet (PoE), which reduces the need to have a separate wall outlet and can take power directly from the Ethernet wire.

Winegard RW-2035 offers a decent administration feature set for getting the network up and running. Though it does not feature some of the advanced customization options found in the Netgear and TP-Link offerings, it does come with the option of setting up guest networks.

Coverage and Performance: The three 5 dBi antennas allow for a coverage of up to 300 m. Since this is a wireless N extender, only the 2.4 GHz band is available, which supports a maximum throughput up to 300 Mbps. However, the actual practical speed will depend on many factors, including your source router's throughput. Speeds will be decent as long as there no obstructions in the signal path.

Winegard also offers a one-year labor warranty and a two-year parts warranty along with complimentary telephone and email support, making this one of the best long range outdoor Wi-Fi extenders on the market.

Features: The Ubiquiti NanoStation locoM2 is an outdoor wireless access point customer premises equipment (CPE) that can be used as a long range outdoor Wi-Fi extender. The Ubiquity locoM2 looks to be a very compact outdoor Wi-Fi extender, but don't let the looks deceive you. This compact CPE packs enough punch to transmit wireless data over the 2.4 GHz band effortless to the opposite corner of the street.

The NanoStation locoM2 offers two Ethernet ports, one of which supports passive PoE. This can be very useful in situations where you want to power a surveillance camera in the neighborhood alongside the locoM2 without having to provide for additional power inputs. Setting up the locoM2 can get a bit cumbersome for new users, often requiring them to reference some YouTube videos for better understanding.

Coverage and Performance: The Ubiquity NanoStation locoM2 offers some of the best coverage and performance possible with current long range outdoor Wi-Fi extenders. Ubiquity claims a staggering coverage of more than 3 miles while it should be possible in practice to easily cover more than 1 mile, thanks to the high gain 8 dBi antenna.

While the coverage is excellent, the 2.4 GHz band limits the overall throughput possible on the 802.11n protocol. Overall, if you are looking at providing point-to-point connectivity for surveillance systems or offer extended outdoor Wi-Fi coverage to large areas, such as parks or recreational areas, there aren't too many competitors to the Ubiquity NanoStation locoM2.

Features: The TP-Link CPE710 is the best long range outdoor Wi-Fi extender if you are thinking about covering large distances of the order of dozens of kilometers. The CPE710 uses a powerful 23 dBi high-gain directional antenna that enables seamless point-to-point (PtP) or point-to-multipoint (PtMP) across long distances with minimal signal loss. The CPE710 is also IP65 rated for weatherproofing and is also resistant to up to 15 kV electrostatic discharge and 6 kV of lightning.

In a PtP setup, two CPE710s can be linked together wirelessly to relay signals alleviating the need for long-distance cabling. In a PtMP setup, several CPE710s can be linked to a common base station and centrally administered. The TP-Link CPE710 supports an 80 MHz channel bandwidth and 2x2 MIMO resulting in much improved speeds and less interference.

Coverage and Performance: The TP-Link CPE710 has the best among all long range outdoor Wi-Fi extenders if you can really make use of it. TP-Link claims no less than 18 miles or nearly 30 km range between two CPE710 points. The extender works using both 2.4 and 5 GHz bands to minimize network congestion and improve speeds. TP-Link offers the Pharos Control system for easy administration of all devices on the network from a single PC.

So, that was our roundup of the best long range outdoor Wi-Fi extenders to buy in 2020. These extenders have long coverages ranging from several meters to even several kilometers. While for most purposes any conventional outdoor range extender will do, it helps assess the extent of coverage required beforehand and decide on an outdoor Wi-Fi extender accordingly to minimize the hassle of installing and administering multiple extenders.