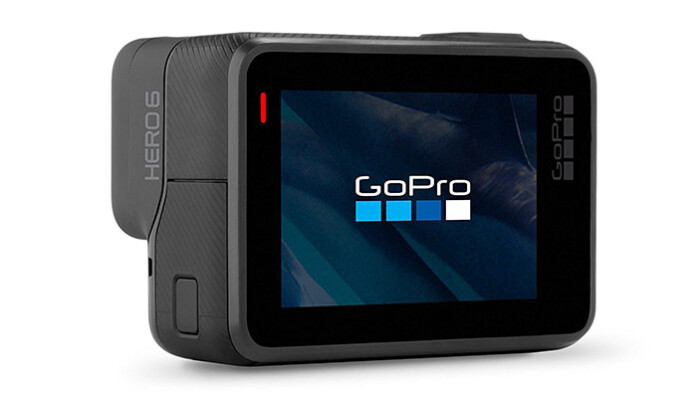 Action cameras are nothing like other cameras that we see around us. You can literally attach them on top of helmets, cars, surfboards, gliders, and even motorcycles. They are small in size, resilient to damage, fairly simple to work with and come with a lens that captures the world around you in high definition.

The fish-eye perspective of sports cameras gives a dramatic, rather over-the-top feeling to the footage captured. This makes them popular with participants of extreme sports and the common folk who want to use cameras to record their journeys. In fact, some TV production studios also use these cameras in places where using a regular camera would be difficult.

If you are mounting the camera on top of a helmet, you should go with a bullet cam. The box designs tend to be more stable for chest mounts. The other load of features that includes 4K, GPS, touchscreen, and Wi-Fi needs to go through the “need v want” test.

The feature set will definitely add to the price of the cam. While they may or may not add to the exceptionality of the footage, the great footage is possible even without these features.

Over the last few years, GoPro has been the gold standard in action cameras. While a number of other companies (including some big names) have done considerable research and production work in action cameras, the GoPro Hero is still the favorite for many.

But GoPro is not the only good action camera out there – not by a long shot. Whether you are already a GoPro owner looking for a change or someone starting out on a fresh purchase, we show you some cool cameras that are the best GoPro alternatives.

With that, we bring you the action cameras that work as the best GoPro alternatives. The best thing – you will find all these cameras online! 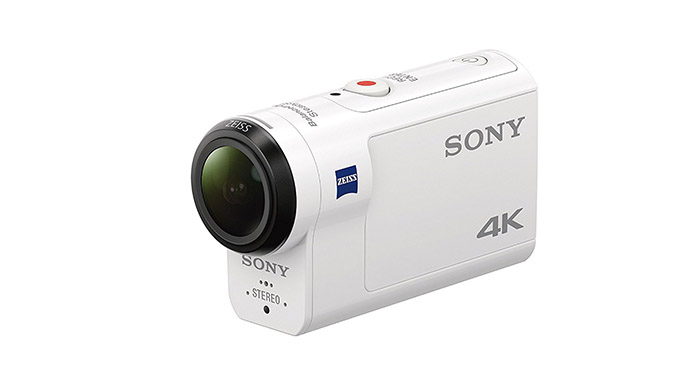 When it comes to action cameras and their lenses, SONY inspires as much confidence as GoPro or any other top brand. The FDR-X3000 comes with Bluetooth, built-in WiFi, HDMI, NFS, GPS, 3x recording, and a microphone jack. There are built-in lights and you can adjust the beep volume for enhanced control.

The R Version of the camera comes with a LiveView Remote – RM-LVR3. The remote establishes a Bluetooth connection with the camera, allowing users to control the camera remotely. The general build of the camera is splash proof. You can go for the waterproof case that protects the camera at up to 197 meters underwater.

The image stabilization on the camera is quite phenomenal. It lets you capture sharp 4K video irrespective of the physical turbulence. The advanced camera shake compensation provides a balanced optical steady shot. And then there’s the magic of the ZEISS Tessar, the lens that differentiates the SONY FDR-X3000 from the rest of the flock. 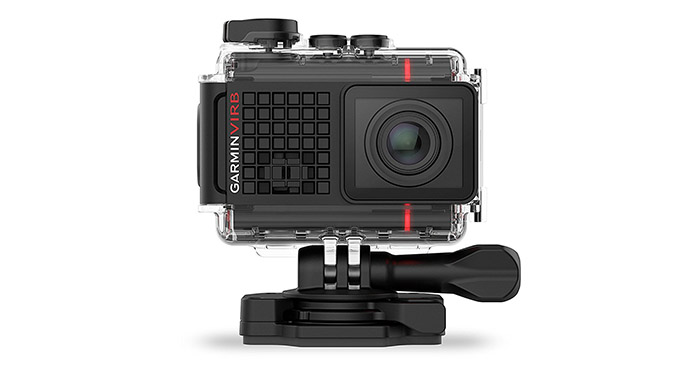 The Garmin Virb range of cameras includes a fresh lineup of both high-end and mid-end cameras. The Garmin Virb Ultra 30 is the flagship model placed above the likes of the Virb X and Virb XE. The Virb 30 closely resembles the GoPro Hero cameras. The lens on the 30 is a 12MP image sensor with the capacity to record 4K videos at 30fps.

The action camera also comes with 3-axis image stabilization, a viewfinder and a 1.75” touchscreen to view what you are recording. The proprietary G-Metrix technology in the camera makes Virb 30 more than an action camera. You can capture performance data like elevation, heart rate, speed, g-force, etc.

Apart from these sensors, the device also includes a gyroscope, an accelerator, a compass, and an altimeter. All these are typical Garmin features meant for the high-adrenaline adventure junkies. However, if you are not someone who can make use of all these features, you can definitely save your money here. 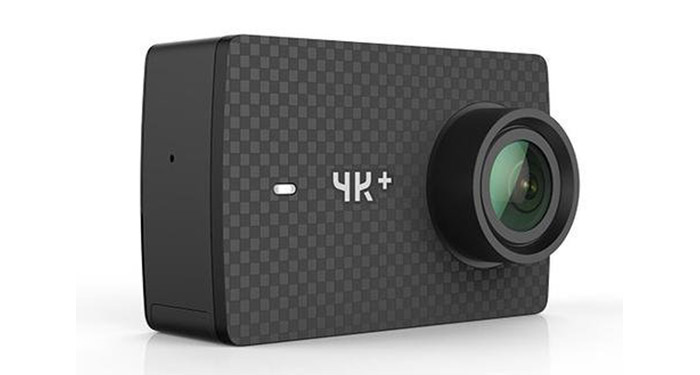 YI technology is a subsidiary of Xiaomi known for building action cameras that match GoPro for performance and quality. The 4K+ is a facelift of the YI 4K, which was a pretty famous action camera in itself. The improved feature-list on the 4K+ includes a 155-degree ultra wide angle lens with an aperture of f/2.8.

The device also comes with a Sony IMX277 12MP 1/2.3” sensor for improved image stability. Then, there is the Ambarella H2 chipset, which is incidentally a specialized 14nm video encoding SOC. But the real potentially game-changing feature is the claim of being the first 60fps/4K camera of the world.

If you can tell the difference between a video recorded in 30fps and one made in 60fps, you should totally go for this. But we will add that it should make a lot of difference when recording high-velocity action sport and adventure sequences. The Wi-Fi connectivity makes the camera a complete kit. 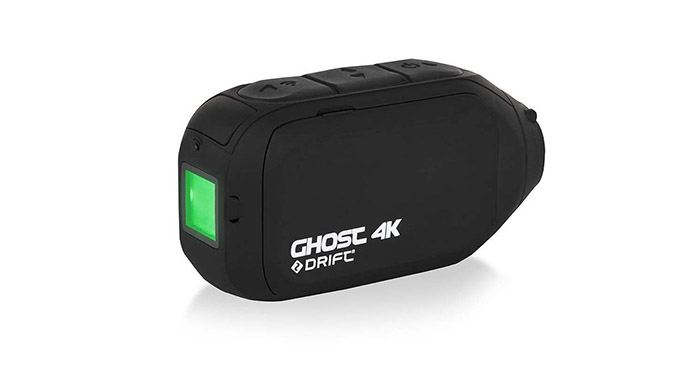 Based out of the UK, Drift Innovation has been making pro quality action cameras for a while now. The Drift Ghost 4K is a significant upgrade for one of the earlier cameras by the company. Before the Ghost 4K, the Drift HD action camera was released in 2011. Unlike the first model, the Ghost 4K can shoot 4K Ultra HD videos at up to 30fps.

There is a 12MP Sony CMOS Sensor with a 4GB Flash alongside 8GB DDR3L memory to keep the device going at speed even when you put it to considerably heavy use. Apart from these, the camera comes with dual-band Wi-Fi connectivity with support for 2.4GHz and 5.8GHz frequencies.

For enhanced noise reduction, you get dual microphones that cut out the wind noise. Then, there is video stabilization that reduces the blur in videos and photos. The modular design of the camera gives the user more control over the shoot. 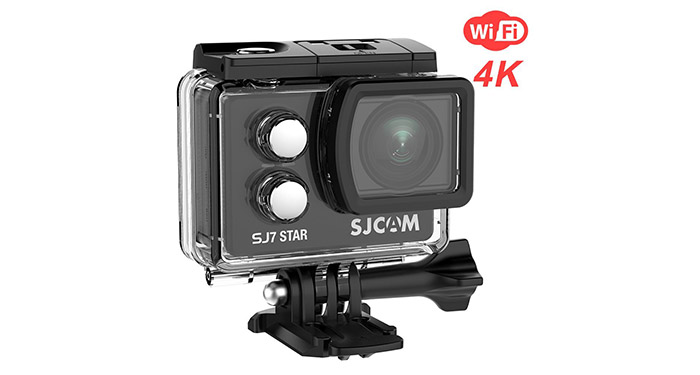 SJ7 by SJCAM is perhaps one of the best alternatives to the GoPro Hero series. As far as the range of features is concerned, the SJ7 is second to none. Its predecessor was a legend in itself that received both spectacular reviews and raining sales shortly after hitting the market. The stylish design is topped by a 2” touchscreen panel on the rear.

The SJ7 draws power from the Ambarella A12S75 chipset. You can click high-quality images thanks to the Sony IMX 117 12 MP lens. If you use the interpolation feature, the sensor can grow up to 16MP in size. 4K footage is powered by a 166-degree wide angle lens.

Thankfully, you also have the option to shoot 1080 30fps videos. The best feat is the 120 fps slow motion captures that give a totally out worldly feel to just about any footage. In addition, the distortion correction and advanced gyro stabilization work together to make sure each frame is just as distinct as the entire footage.

Whether you go for a GoPro camera or one of the action cameras mentioned in this list, it is important to exercise caution. Here are some steps of precaution that you must take before using an action camera:

In the world of action cameras, it is widely believed that there is GoPro and then there are the rest. In this article, we have covered five viable GoPro alternatives that sit on top of the rest. We encourage you to research further on the devices. As always, keep tech-ing!

Share this article on the social media if you liked it!