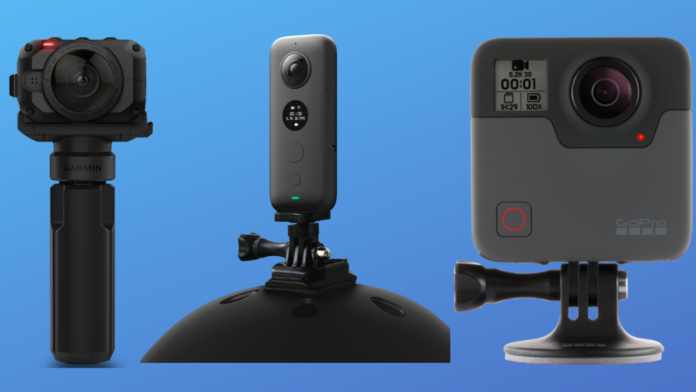 360-degree cameras owe their name to their ability to capture 360-degree shots of the environment they are placed in. This means that they capture everything in front of and behind the camera, as well as everything in between. With this said, we can divide the currently available models into two groups: the smaller pocket-sized devices and the larger camera models. The type of camera you choose depends on your individual shooting needs since you might be better off using a smaller camera if you just plan to take casual shots and selfies. The larger models will be more useful in professional and more serious pursuits.

It is also worth noting that those with a VR headset will enjoy the 360 experience even more, for, they will be able to feel the immersive experience at its very best. It is also important to pay attention to the post-processing workflow. While many camera models automatically stitch together the different lens views to yield a final 360 image or video, some cameras might require you to stitch the different views manually. Most software makes this an entirely seamless process nowadays so you should be fine either way.

The GoPro Fusion is a waterproof 360 camera. However, it is not meant for deep dives as it can withstand depths only up to 5 m. One of the best things about this tiny camera is its ultra-high resolution, which stands at 5.2K. Using a feature called OverCapture, the Fusion can extract normal FHD movies from the captured 360 footage. You can also use voice commands for hands-free recording. GoPro is best known for its easily mountable cameras and it applies to the Fusion model as well.

The camera also features GPS, compass, gyroscope, and accelerometer functionality. You will also find Wi-Fi and Bluetooth functionality to pair the camera with your smart devices. The only gripe with this camera is that there are two microSD cards required for the front and back cameras each, which can make data transfer a bit cumbersome.

The Samsung Gear 360 looks like a cute toy at first sight but make no mistake, this is a potent 360 camera. The Gear 360 features a small camera globe and is water resistant, though not waterproof. It is simple to switch between the video and image modes and you will be able to start and stop recording with one touch. The device can be paired with your smartphone for more control over exposure and a live feed of the images captured. The small LCD helps change the shooting mode between Video, Photo, Time Lapse, Video Loop, and Landscape HDR easily.

The problems with stitching the imagery are also reduced since the image capturing lenses are very close and can record 4K video at 24 fps. The overall image quality can be a bit sharper and well defined but one of the biggest plus points of this camera is the fact that it is very affordable and is easily one of the best 360 cameras under $100.

The Ricoh Theta V can be a good 360 camera if you don't require the build quality of an action cam. It can capture 360-degree videos in 4K resolution at 30 frames per second in its internal memory. You can use the smartphone app to transfer images and video from the camera to instantly free up memory. The Ricoh has an array of 4 mics to capture spatially rich audio information for a lifelike experience. There's also an option to connect a high-quality external microphone for professional audio capture if needed. Another big advantage of using this incredible camera is that it supports Wi-Fi, which means you will be able to connect it with your smart device and computers with ease.

A major drawback though is that it is not waterproof like many of its peers in this list of the best 360 cameras. You will be able to place the device in a waterproof casing to take it underwater, though. There is no scope for expanding the onboard 19 GB storage and you will find yourself emptying the memory often. Some users have also complained about purple fringing where the two hemispheres blend while recording video

The Insta360 ONE X is an upgrade to last year's Insta360 ONE and is really one of the best 360 cameras in the market today. Marketed by the company as the 'world's easiest' and an entire 'camera crew in your hand', the Insta360 ONE has impressive specs. It supports 5.7K OverCapture and offers an advanced app for video editing. You also get multiple shooting modes such as HDR, TimeShift, and Perspective, and also have the option of taking stills in RAW.

The videos are stabilized via the 6-axis gyro system and the company's FlowState Stabilization to help users obtain super smooth motion. The camera comes in several bundles. The Surf bundle include waterproof housing, making it a must-have companion for your travels and adventures like snowboarding.

The Garmin VIRB 360 is one of the best waterproof 360 cameras available and can stand depths up to 10m. This camera comes with clip-on cradles for different mounts. It captures 5.7K video at 30 frames per second and there is little to no color fringing at the blending of the two hemispheres. The Garmin can stitch images in-camera for videos up to 4K so you can get 360 images and videos easily without having to stitch them later yourself. For higher resolution videos, Garmin's HyperFrame Director offers an easy way to stitch videos and edit them. The VIRB 360 has built-in GPS and G-Metrix sensors that allow for recording meta-data during adventures. The camera can be controlled by voice and uses image stabilization to produce smooth video recordings in a variety of shooting environments.

The Garmin VIRB 360 is pricey but allows for a lot of ruggedness that might be best suitable for using it on a motorcycle and offers high-quality 360-degree video capture.

The YI 360 VR camera will partner, effortlessly, with your smartphone and allow you to capture breathtaking 360 imagery. This camera offers a dual-lens system, with the angle of each lens being 220 degrees. The camera also features built-in image stabilization, which ensures you get smooth shots. One of the best features of the YI 360 VR is that it can stitch 4K videos without having to connect to a PC and also live stream 4K 360 videos via the built-in dual-band Wi-Fi by offering professional grade quality.

This model uses two Sony image sensors and has a 60-minute battery life. It will effortlessly pair with your smart devices and the YI 360 app allows for all sorts of editing options right on your iOS or Android smartphone. You will then be able to easily share your images with the world in a tap. The device also supports Street View (by Google Maps), so you can post your images to the app for the whole world to see!

The Nikon KeyMission 360 is a well-built 360 camera and does not seem to be affected by the elements. The device is extremely rugged in construction and will withstand the impact of water, dust, and ice. So it can be used in places like real estates for displaying their properties and on any condition. The camera shoots 4K UHD but does not support 5.7K over capture that is found in the GoPro and Gramin models. Interestingly enough, it features prime lenses on both sides of the device, which capture images on their respective sides. These are then blended inside the camera to produce cinematic 4K imagery and still shots. You can also transfer the data to a PC and edit using the KeyMission 360/170 software. The software does not offer a whole lot of features but get's the job done.

The KeyMission is one of the most impressive all-weather models on our list: it is waterproof up to a depth of 30m, shockproof, being able to withstand a drop of 2m, and freezeproof down to a temperature of -10 degrees Celsius. Needless to say, you can take this with you wherever you go without the fear of losing your camera to hostile environmental conditions. Another reason to revel in the joy of shooting unlimited 360 videos and photos out in the rain or underwater. The main gripe with this camera is the buggy SnapBridge software and the unreliable Wi-Fi connection that keeps dropping constantly.

A beautiful camera from the respected photography giant Kodak, this model is a wonderful action cam that uses 360 degrees spherical curved lenses to capture 4K imagery. You will be able to pair this 360 camera to your iPhone or any smartphone to control all settings from your device itself. What's more, the image sensor produces 16 MP images. Like most of its peers, the camera supports Facebook and YouTube 360 videos, which means you will be able to share your recordings or even use it to live streaming on these popular platforms in the 360-degree format. Included in the kit is the software to manage your recordings on your desktop or smartphone.

The software is not really great and is buggy. The quality of the recordings are good but they have only a 72 dpi resolution. Image stabilization is also not available. A good aspect of this camera, however, is that you have a wide range of accessories available to choose from.

Even though Rylo isn't a hugely popular brand, we can easily say that it's one of the up and coming names. The Rylo 360 is one of the most interesting models in this article and is most known for its small size. The camera has built-in image stabilization that Rylo says is highly advanced and produces incredibly smooth videos. You will also be able to quickly transfer your recordings to your phone and ultimately upload it to your social media fast. Rylo works with both your Android phone and iOS devices. The camera offers a handy picture-in-picture mode that allows you to show off your facial expressions while you shoot the scene. You also get a time-lapse mode and the ability to define points of interest in your video.

Rylo has been pushing out firmware updates consistently and the quality of the recordings has been vastly improved. However, we do feel that the overall low light recording can be much more improved along with the quality of still photos and audio.

The Vuze 360 is different from the others on our list, though, on account of the way it uses 8 full HD lenses. The camera pairs well with the Vuze app, which means you will be able to remotely control your 360 video and image recording endeavors without getting involved in the action yourself. The camera also uses 4 microphones to capture spatial sound with all its dynamics.

With this, our overview of the best 360 cameras is complete. We hope you enjoyed reading this article and that it provided you with some interesting information. Please feel free to share your feedback and comments with us.