YTS and YIFY to Be Dragged to Court by Filmmakers 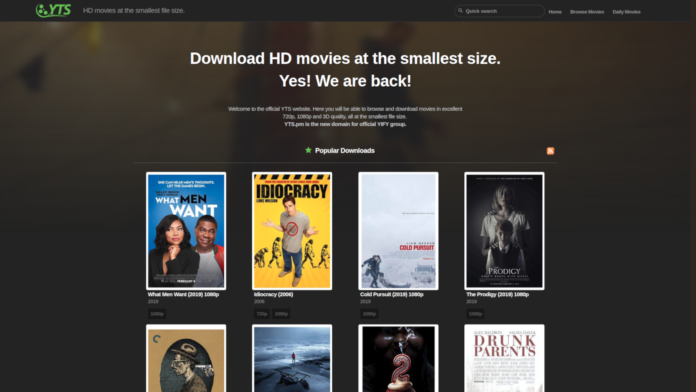 A coalition of seven movie production studios and copyright holders are after the operators of YTS and YIFY, the widely popular movie torrent downloading websites. The relevant complaint was submitted on the US District Court of Hawaii and demands the revelation of the identities of the people behind those two websites by Cloudflare. Moreover, they call for the seizure of the associated domains, an injunction that will prevent hosting companies and search engines from facilitating access to the websites, and a damage compensation of $150k for each pirated movie that is to be found on the platforms.

The original YIFY/YTS website succumbed to the immense legal pressure of copyright holders back in 2015, but the brand name continued to live through other domains and numerous supporting proxies. YTS.am and yifymovies.is are the two main wagons that carry the hugely popular movie pirating brand, managing to surpass the success of even the legendary PirateBay torrent platform. While the sites seem to be operating independently from each other, they use the same logos and often release titles simultaneously, so the plaintiffs believe that they act in concert.

However, the filmmakers are not only after the website operators but several of their users as well, also targeting two Hawaiians who downloaded a copy of their movies through the aforementioned platforms. As we saw last week, the same court signed off a DMCA subpoena against individual pirates, so the selection of the particular court was not random. Already, the defendants have invoked the confusing nature of the websites, claiming that they mistakenly believed that they were legitimately downloading the movies from an official distribution channel.

The movies that are represented by their respective owners, and that support the complaint are “Hunter Killer”, “Boyka: Undisputed”, “I Feel Pretty”, “The Hitman’s Bodyguard”, “Mechanic: Resurrection”, “Singularity”, and “Once Upon a Time in Venice”. So far, there has been no injunctive action from the court, and both of the targeted websites remain online and operational. The same applies to the operators of the two platforms, who remain anonymous thus far. However, with the plaintiffs’ demand to go on a trial by jury to be almost certainly approved by the Hawaii court, the situation is about to change soon.

If you’re looking for alternatives, check our list with the 15 best torrent sites to use right now. Also, don’t hesitate to leave your comments down below, or hop to our socials on Facebook and Twitter to check what else is on in the tech world today.