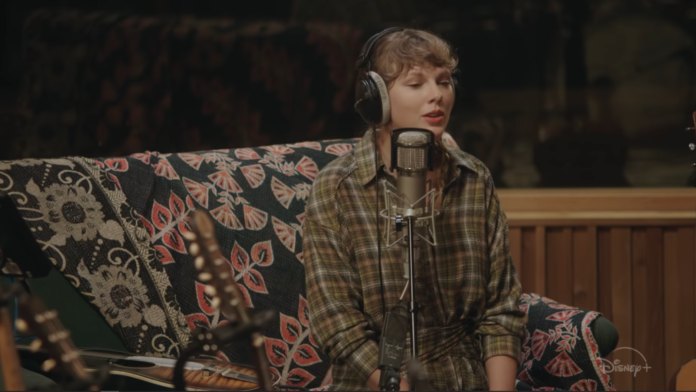 Folklore managed to sell two million copies in the first week, as Taylor dropped the album without any pomp and fanfare, just like she did with previous titles. All 16 tracks entered the Billboard Hot 100 simultaneously.

What made this album special is that it’s completely different from anything she’s put out before it. It was all recorded in complete secrecy, produced alongside the wonderful Aaron Dessner from The National, as well as Jack Antonoff, her longtime collaborator.

The film shows them talking about their collaboration, performing various songs from the album, and more about what went into creating it all.

Is There a Trailer for Taylor Swift’s Folklore: The Long Pond Studio Session?

There sure is, and you can check it below so you can get prepared for it all before it lands.

When and Where to Watch Taylor Swift’s Folklore: The Long Pond Studio Session?

Taylor Swift made a big announcement earlier today, as she revealed an intimate concert of her new album would be released on Disney Plus. The recording features only her and her collaborators in a lake-side cabin.

The original film drops on November 25th. Usually, content is added at midnight on Disney Plus, so tune in to watch. Much like the album dropped a few hours after the original announcement, so will this movie.

Since this is a film that will go on to Disney Plus, you’ll need a subscription. You can subscribe to the service directly for $6.99 per month or $69.99 per year. You can also go for the bundle that includes Disney Plus, ESPN+, and Hulu for $12.99 per month.

The subscription will give you access to a ton of Disney content from over the decades, Marvel films, Star Wars, National Geographic, Pixar, and more. You can check out our Disney Plus review here.

Disney Plus comes with apps for iOS and Android smartphones and tablets, Apple TV, Android TV, Fire TV, Chromecast, and more. If you’re reading this article, you probably can watch Disney Plus.

Sadly, no. This is an original Disney Plus film, so this is the only place you can watch it. You will find Miss Americana over on Netflix, however, if you want to watch that one, as well as the Reputation Stadium Tour.