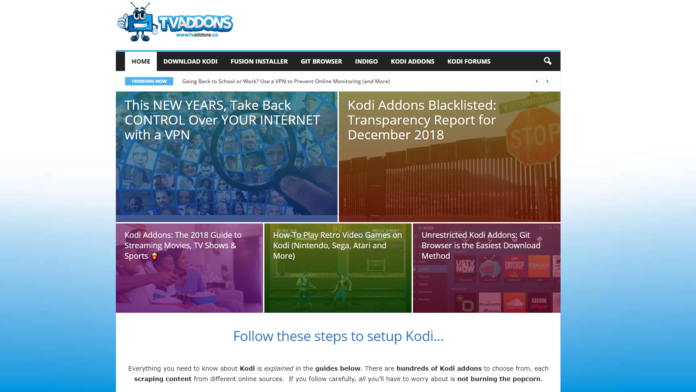 TVAddons, a popular online repository of Kodi add-ons that are developed and submitted by various developers, has once again demonstrated its supportive stance towards their contributors. Media creation and distribution giants like CBS have requested the website’s owner to remove three add-ons that enable Kodi users to stream content from the CBS News, CBS Sports, and the Entertainment Tonight channels. While TVAddons removed the addons from the site, they refused to flag their developer as “repeated infringer”, as they challenge the infringing status of the addons in the first place.

According to TVAddons, the only thing done by the particular addons is to stream content that is already freely and openly available in the CBS website, without any kind of geolocational limitations or the need for subscription plans. That said, they do not believe that the addons infringed any copyrights, but they have immediately removed them only to avoid fighting against CBS’s will on the court. The next step though, which would be to flag the developer of the addons is going too far for TVAddons, so they are refusing to do it. TVAddons is already dealing with ongoing lawsuits submitted by Bell Canada, Videotron, and others, so they will only go to court against another copyright owner on solid defense grounds.

TVAddons established their “repeated infringer” policy when lawsuits from north America piled up against them last year, forcing the repository owners to remove all problematic add-ons and implement regular checking and proactive removal. At the end of each month, they are releasing a detailed “transparency report” that is informing users and those who prepare DMCA notices of the blacklisted Kodi add-ons and their forks on their website. Due to the aggressive reviewing method that is followed, the website owners go to the extent of apologizing to the users and contributors with the following statement: “We’re sorry about having to preemptively blacklist so many add-ons, many of which may not even be infringing. Unfortunately, however, we have no choice but to self-censor until we bring our Canadian lawsuit to termination. Should you have any questions or concerns, please feel free to visit our discussion forums anytime.”

Considering the above situation and the pressure under which TVAddons is at the moment, it is commendable that they are still refusing to flag the CBD addons developer. This is probably done as a way to maintain a balance between copyright infringement compliance and offering a safe place for developers and users to pick a Kodi addon, otherwise, they would start losing people from both categories rapidly. Still, though, their stance is praiseworthy.

Are you a TVAddons user? Let us know of your experience with the online add-ons repository in the comments section below. Don’t forget to also visit our socials on Facebook and Twitter, as more news is getting posted there every hour.