South Park Kodi Addon: How To Install It on Kodi 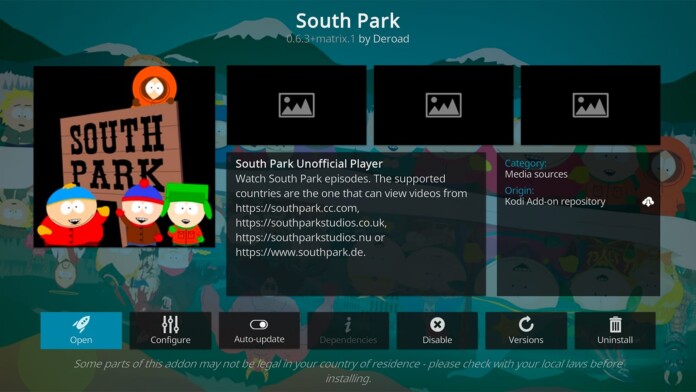 We’re sure that South Park needs no introduction, as this iconic animated TV show is still going strong after two decades, without signs of slowing down. With that said, there are many ways to watch South Park online. However, it’s interesting to note that Kodi has positioned itself as perhaps the best option to achieve just that – thanks to the South Park Kodi addon.

There's not much we could say about South Park on Kodi, which comes as a very simple addon. As soon as you open it, you'll see a list of its 20+ seasons, so you can pick any episode you'd like to play. And if you're feeling adventurous, the addon can play a random episode.

When watching cartoons via Kodi – you HAVE TO use a VPN! That’s the only way to secure your use of Kodi while getting extra content as well. Here’s what VPNs bring:

How To Install South Park Addon on Kodi

Finally – here are the 10 steps to install South Park on Kodi:

1. Launch Kodi. Wait a couple of moments until its home screen appears.

3. Hover over 'Download' using the main menu. Select 'Video Add-ons' on the right.

4. Go ahead and pick 'South Park' from the list of addons you see on your screen.

5. The addon’s overview will now open. Proceed to use the 'Install' button.

6. If any dependencies are required, you'll see them now. Click on 'OK.'

7. 'South Park' will now install. Wait until you see a notification on the right.

10. Launch the addon by selecting its icon. That’s it!

That would be all there’s to know about the South Park Kodi addon. If you have any questions for us, don’t hesitate to post your comment just below. And lastly, thanks for reading!